This years Mama Tried Show was coupled with a flat track race at Panther stadium. We were stoked to be part of the Mama Tried Show and brought out our Project 156 Pikes Peak race bike. But that's only half the story. With 10 thousand people packing the stands for Friday nights racing on the concrete our Indian Scout Sixty Super Hooligan bikes were to be put to the test. The action hungry Milwaukee crowd was on fire and the racers were there to give them what they came for. Let's not forget this is Harley's hometown. So the pressure was definitely on. But regardless of brand the racing was insane and action packed with bikes of every genre doing battle for position and style points. It was truly entertaining and continues the evolution of flat track racing and its marketability and entertainment value to race fans and non race fans alike.
Photos by Preston Burroughs 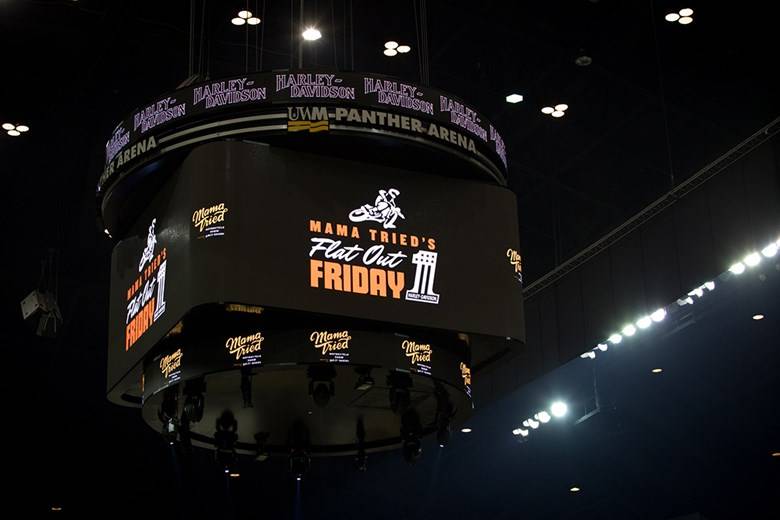 The Flat Out Friday flat track races were held at the indoor arena for the University of Wisconsin – Milwaukee (UWM) Panthers basketball team. Right in the dead center of downtown Milwaukee. With the Mama Tried custom bike show going right down the street, and being in an area where there is a huge love for motorcycles, the arena was packed with spectators. It seats 12,700 fans at maximum capacity and was almost full. The promoters estimate 10k people were filling the grandstands. Definitely the largest Hooligan race held to-date from a fan-base side of things goes. The track was smashed into the size of a basketball court so it was maybe close to a 1/10th mile oval, built on polished concrete with Dr. Pepper syrup for traction. Yes, soda syrup distributed via pesticide sprayers is what kept the bikes hooked up around the corners. There doesn’t have to be dirt to hold a flat track race.

The pits were located indoors as well which was new to us, being from California. Everyone had to haul in their bikes, tools and spares. Bikes had to be pushed outside to be fueled up and we also had to push them to the staging area. The only place they could be run was in the staging area and on the race track. This doesn’t sound like a big deal but pushing around 400-500 lb. bikes isn’t the easiest task and rule-following isn’t the strongest trait of most Hooligan racers. It took some getting used to. 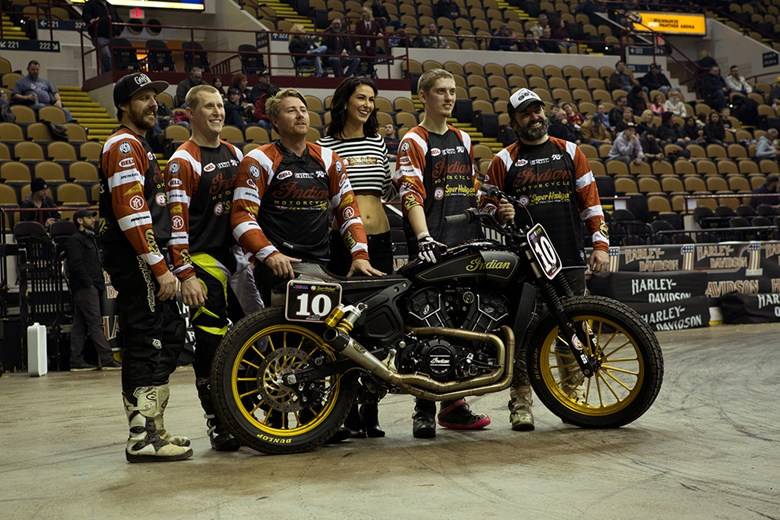 The races ran smooth and fast with Jeremy Prach in charge. We ran two full practice sessions and one practice start per class so we all got plenty of time to get comfortable and make adjustments to our bikes. Compared to dirt we needed to run much higher tire pressure and stiffer shock settings on the concrete track. We are used to running low pressures to get the Dunlop DT3 tires to hook up better in dirt but we actually needed the opposite. With the insane amount of traction, we were raising pressure to try and get the tires to spin coming out of the corners so we weren’t having to fight the bikes so hard trying to avoid high-siding when rolling the throttle on. It was definitely a new track surface that most of us had ridden on but with a few adjustments the Scouts were definitely working really well.

The Hooligan Scout Sixty race team for the weekend included Roland Sands, Cameron Brewer, Aaron Frank, and professional GNC racers Jesse Janisch and Kevin Walters. With 26 Hooligan racers entered total and only 12 going to the main event, it was destined to be some crazy racing. They broke up the class into 5 heat races and the top 2 transferred directly to the main, then a LCQ race for one more chance for 2 riders to advance. Brewer led and won the first Hooligan heat race of the night. Frank and Janisch also won their heat races and qualified straight to the main. Keeping the Hooligan spirit alive, Sands led into the first corner of his heat race and tucked the front end in a glorious lowside and a shower of sparks as the bike skid across the concrete. He went on to win the LCQ, leading from flag to flag. 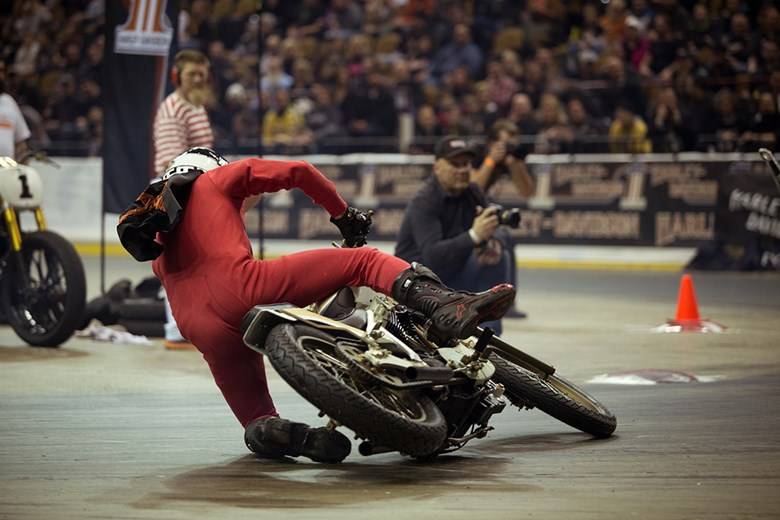 Walters unfortunately crashed in his heat race and the LCQ putting him in the grandstands to watch for the rest of the night. The chassis setup and power delivery of the Scout Sixty race bikes definitely made them very rideable and a threat the rest of the field. The 8 lap main event consisted of 12 riders aboard 4 Indians and 8 Harleys. Most everybody held it together for a clean, exciting race and there were just enough crashes to keep the fans on the edges of their seats. With lots of vintage bikes and crashes from earlier races, there was some liquid that got dripped onto the track. As you can imagine, any amount of fluid re-liquefies the syrup making spots that were as slick as snot. Every time a bike went down the concrete caused a spark show making every incident look extra exciting. Everybody made it out unscathed and now we all know how cool in is to race on Dr. Pepper syrup. Benny Carslon, Mark Atkins & Terry Vestal made up the top 3, Cameron Brewer was 4th, Jesse Janisch 7th, Aaron Frank 9th and Roland Sands 12th after crashing out in the final laps chasing down a podium spot.