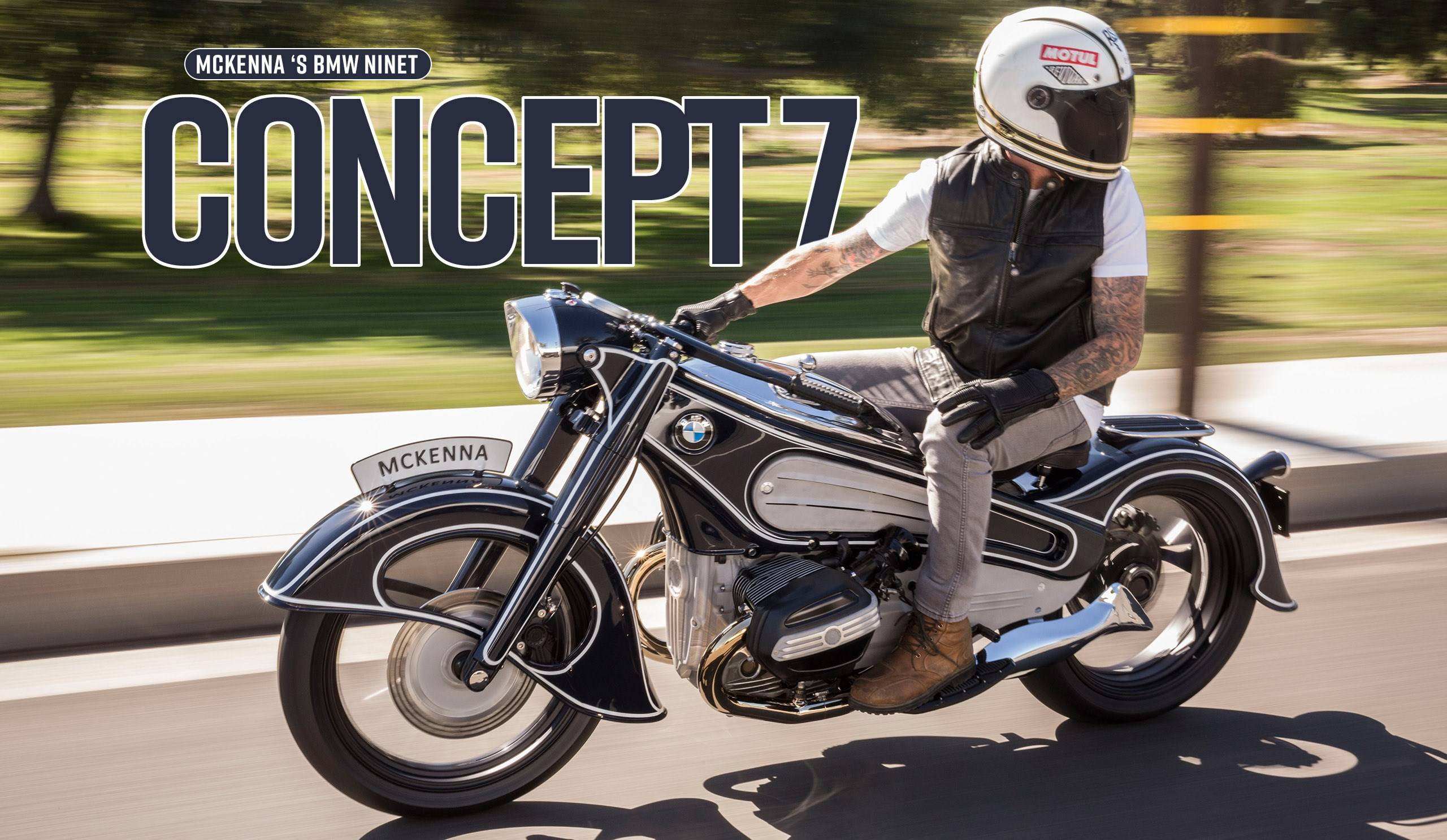 We’ve had the BMW Concept 7 project in the works for quite some time. It’s a project that required full attention and over 6 months of solid fabrication and build time. Starting with nothing more than a motor and transmission in a frame table is a daunting task, even more so than we’d originally imagined. Every detail was discussed and dissected as we combed through images and assessed the machine from every angle hoping to achieve a balance from tip to tail and a feeling of both honoring the original BMW concept 7 and moving the needle forward in the quality and design of the execution. It’s both the overall flow of the machine and the details that set this bike apart from others built at RSD. From the heel operated linked RSD braking system with floorboards and through the gas tank shifter to the over simplified bars with internal throttle housing operating twin carbs, every operational decision was critical. The bike had to run and work as well as it looks. This is by no means a high performance bike, it’s more along the lines of a rigid chopper, but a fantastic one that takes a traditional design and places it into the modern age.

The choice of the midnight blue paint was from the owner of the machine and is a color he used for a beautiful Porsche Speedster. The color is so dark it tricks the eye into thinking it’s black, but upon closer inspection the deep blue plays with the unique lines of the bike and acts as a beautiful offset to the raw motor, RSD Breast Plate and black ops detailing of the RSD Valve covers. 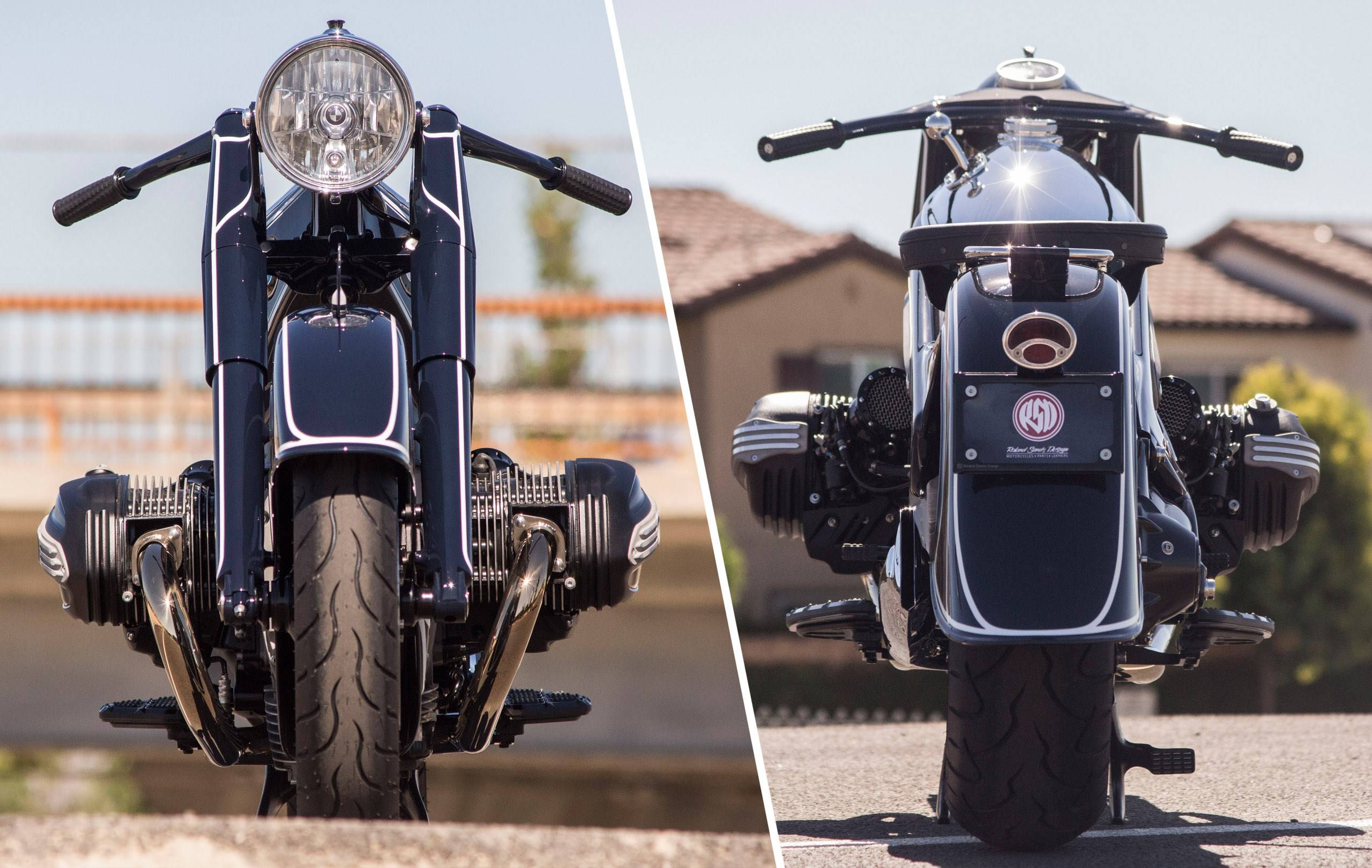 Paint was incredibly important as was the bodywork on the frame which carried a number of intricate zones for mounting the inner fabricated aluminum frame panels, electrics, shift mechanism and everything else. Chris Wood from Airtrix did what he normally does and knocked it out of the park with the original inspired line work.

The split line of the frame and the motor which on the original bike looked to be cast together was a point of much discussion. The lower side panels were fabricated of aluminum and aim to duplicate the feel of the original bike as well as the way the frame wraps around the front of the motor and breast plate creating a distinctive line and honoring the original design.

Gas tank was fabricated with the stock fuel pump components and fitted over the fully fabricated steel and tube frame. The paint job is literally the bodywork as the rear fender is welded directly to the frame. This is usually something we wouldn’t do, but for the R7 it honors the original concept and helped with the overall flow. Function be damned!! 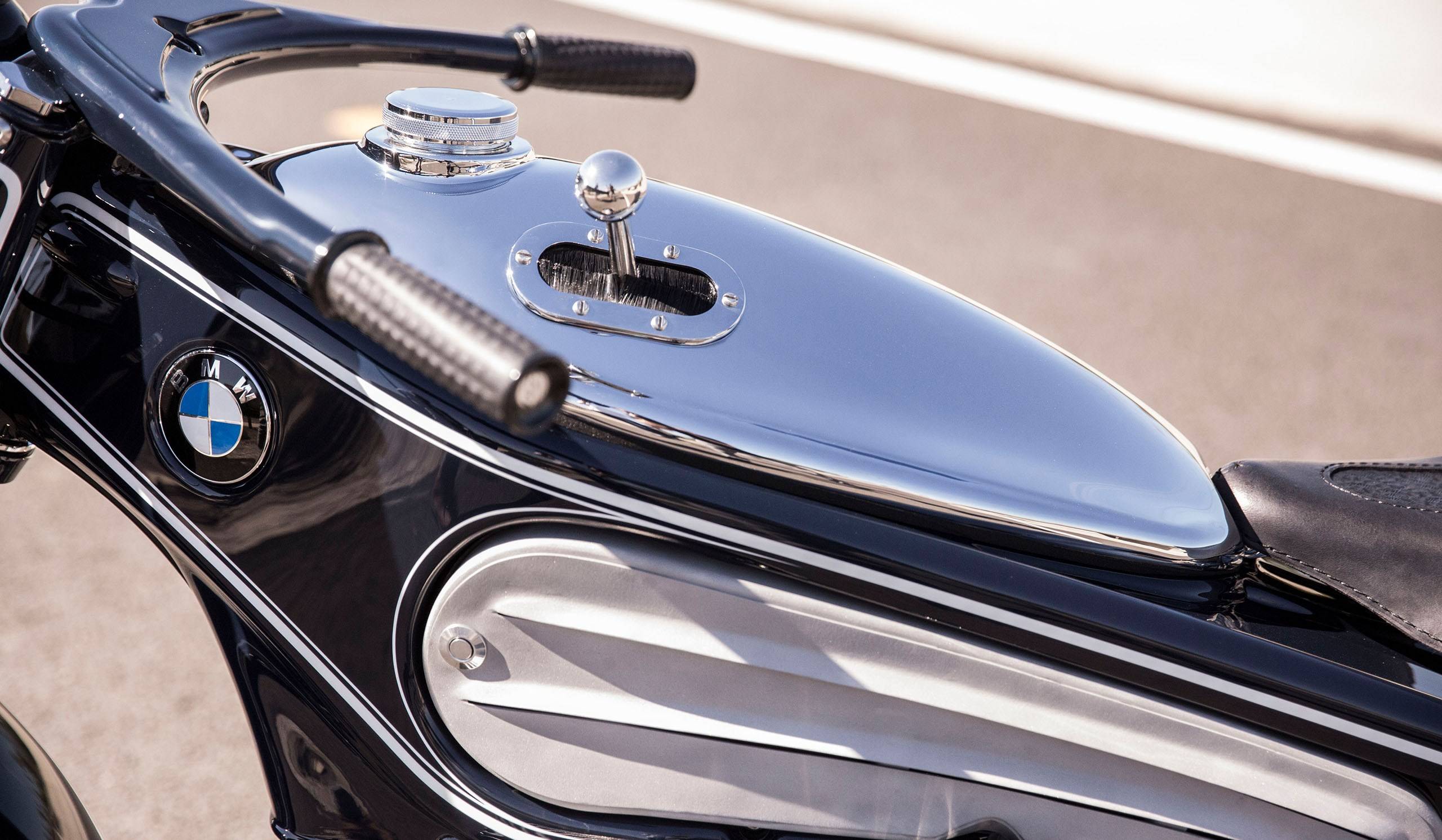 Stock drive unit was one of the few oem components used in it’s original state, blacked out so it disappears into the bike. It’s also the point the frame joins the back of the bike.

Blacked out RSD traction lightweight race wheels were used in place of spokes as a nod to the progressive attitude of the bike. Solid discs and frenched in RSD Caliper hints at the prominent original drum front brake.

Details abound from the hand fabricated plunger seat with hidden springs beneath the frame. One off taillight and license plate were designed from pictures of the original and cast by Chopper Dave as well as the acrylic STOP tail light lens.

Headlight is off a Ural and accepts the stock BMW gauge and headlight with nearly no modifications. Sometimes miracles do come true. As with the fenders which were pulled from two modern Indian front ends and flow perfectly from front to back.

Exhaust is a 2 into 1 version of the original dual exhaust. We chose the single exhaust as we could keep it narrow on the left side and on the right it would of made ground clearance an issue.

Fabricate bars were inspired by the original mustache bars. Rear luggage rack hints at the 3 bar detailing in the valve cover and breast plate and carry into the painted and stainless luggage rack. 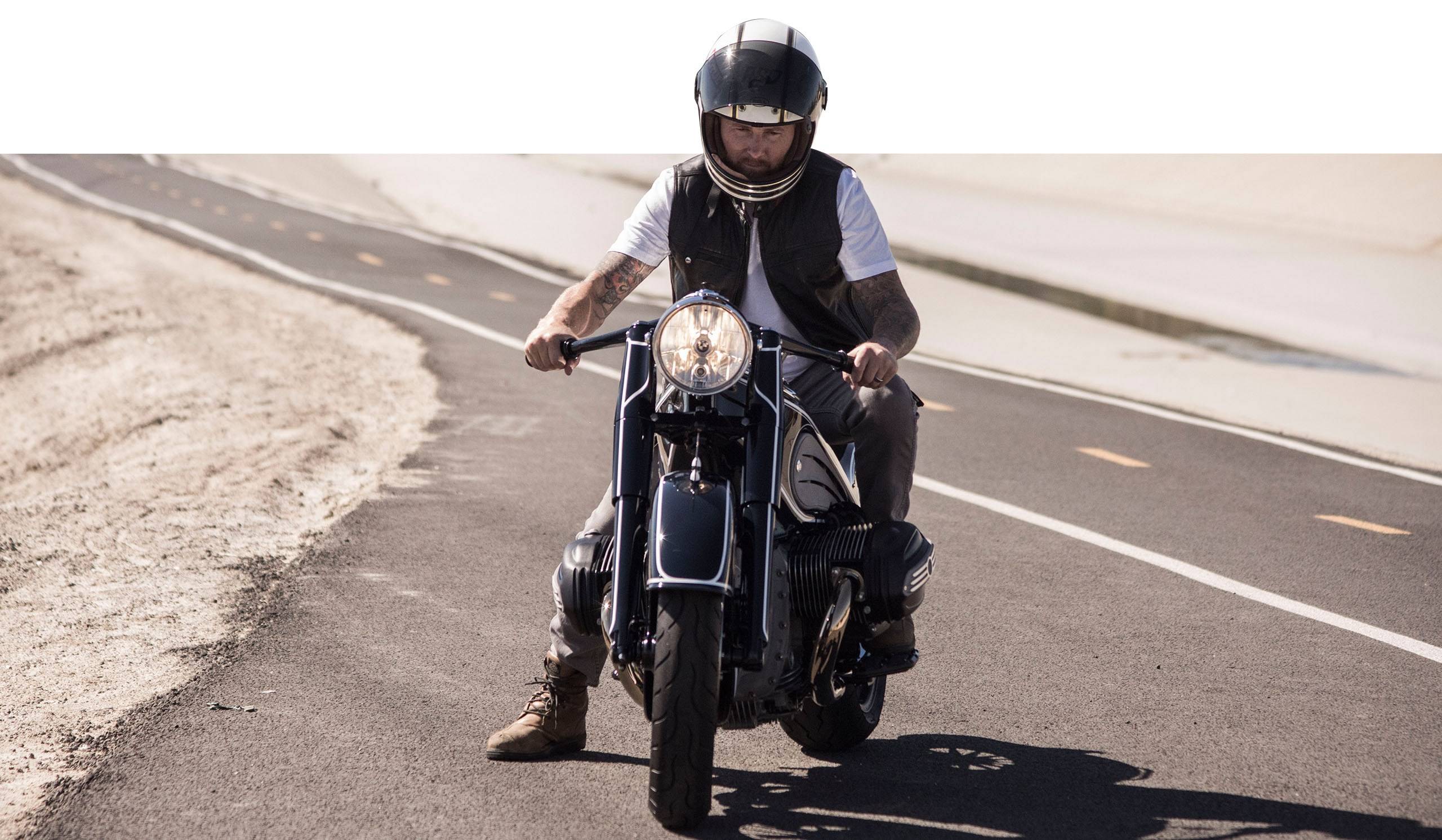 All said and done the concept 7 has been a journey of a project. When you are dealing with a bike as iconic and beautiful as the original bike we want to do it justice and honor what’s come before us. This is no stock bike with a body kit. The RSD R7 is built in the vision of the original, through and through. 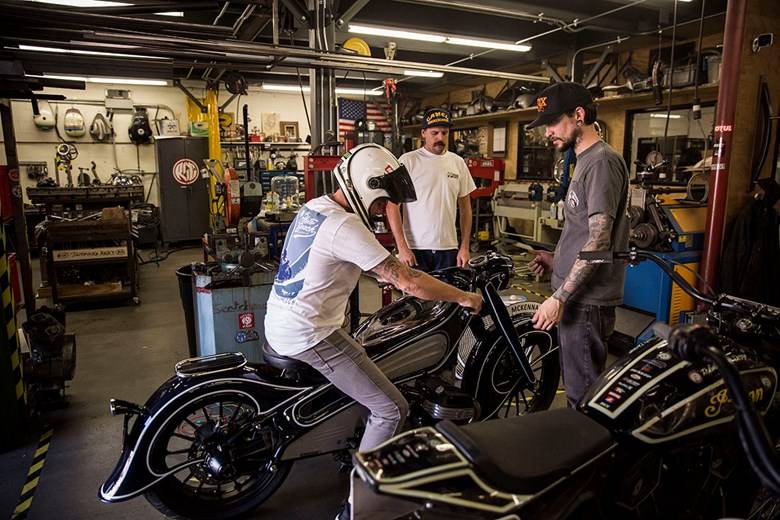 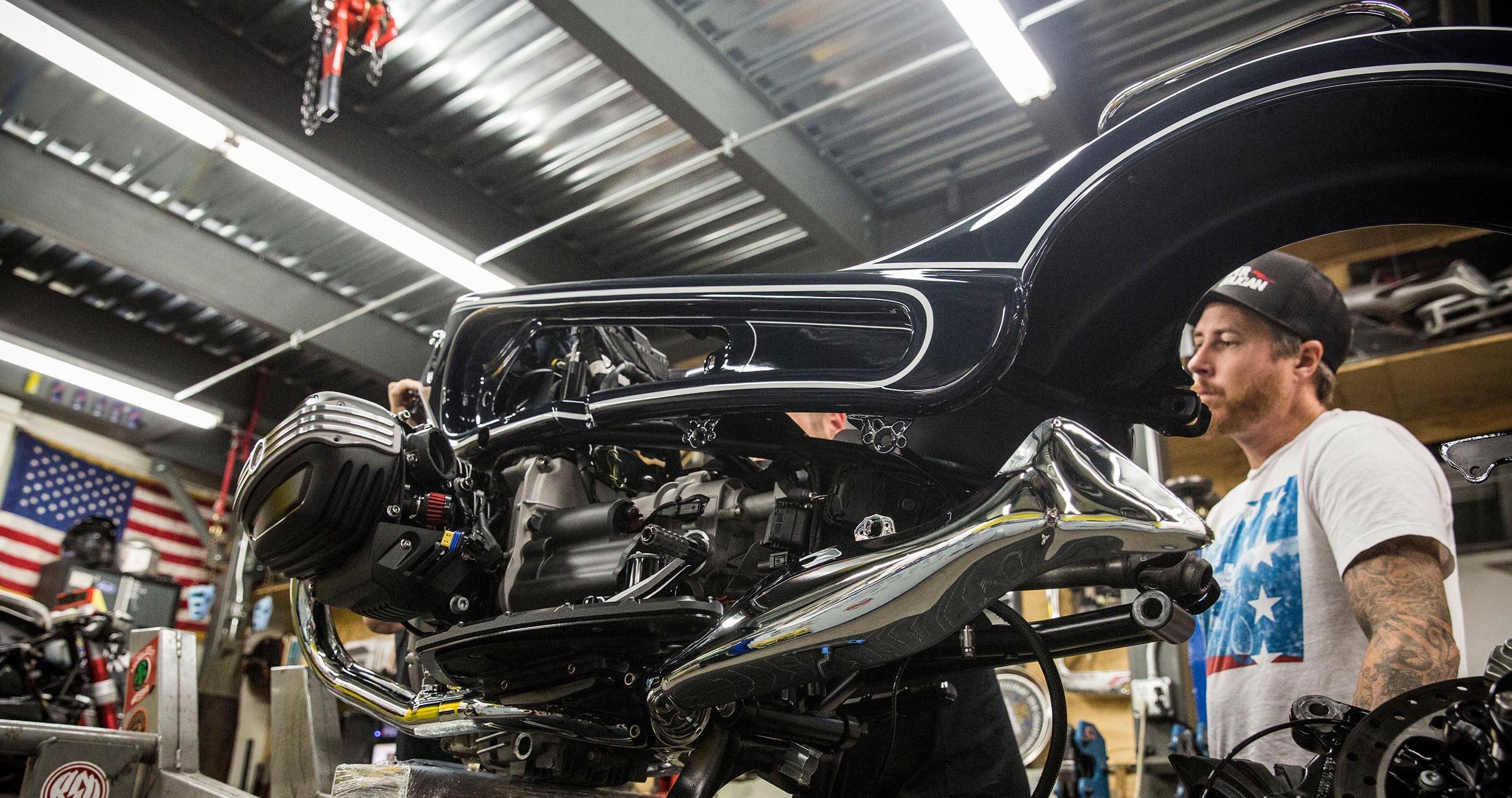 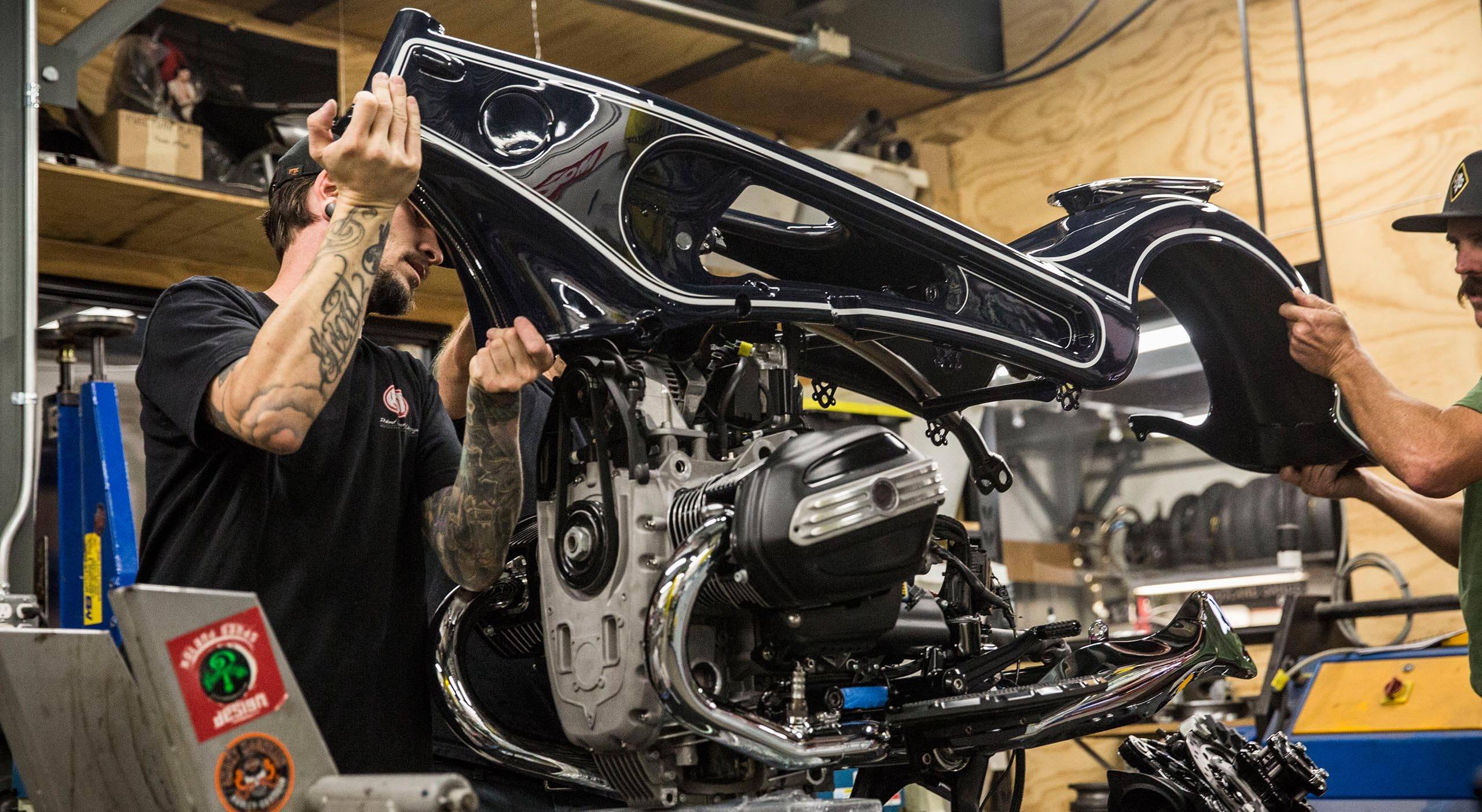 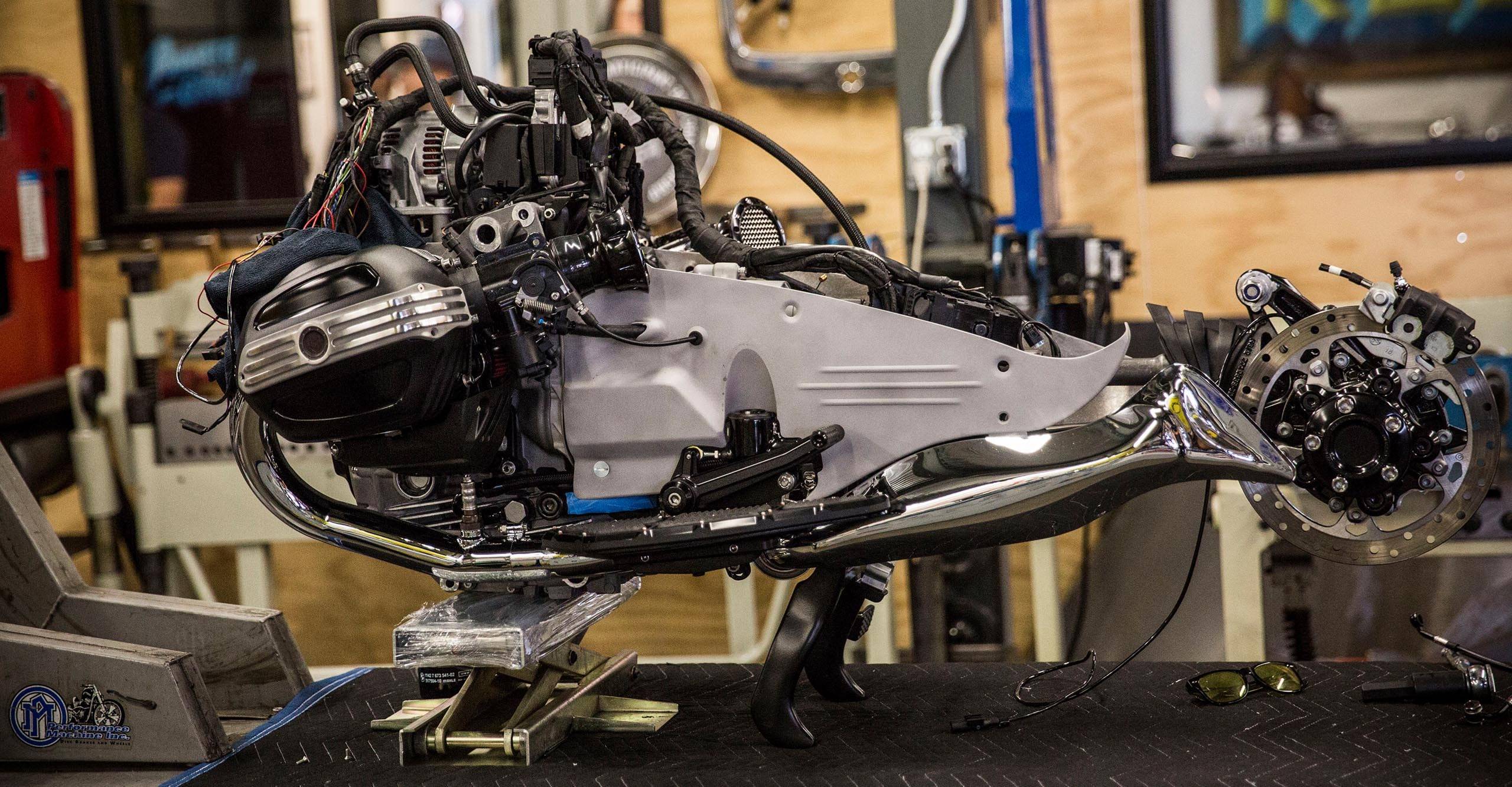 The R7 concept by BMW has been in our minds for quite some time. The original concept was a thing of dreams and was way ahead of its time, featuring the world’s first telescopic forks and a perimeter style frame wrapped around BMW’s parallel twin.

The prototype R7 was designed by engineer Alfred Böning and built in 1934 but never saw the light of day due to BMW management decisions and WW2. Luckily, the bike was found in 2005 and resurrected as a full runner. A machine of this nature is priceless, so unless you are Mr. BMW, chances of riding the R7 are minimal and owning it 100% impossible.

Lucky for us, we found someone as inspired as we were by a modern version of the R7. We had the original motor from the concept 90 sitting on a shelf, and it provided the perfect soul for the beginnings of this creation. 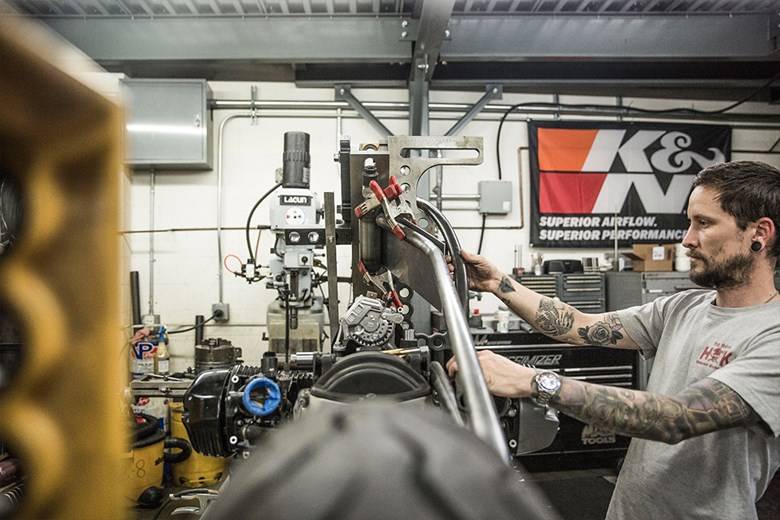