The year was 1967. Perry Sands was 19 years old and he decided it was time he had a chopper. This wasn’t just any chopper, but a 1946 Indian Chief. As all kids do, they bite off more than they can chew. But with a unique eye, a colorful idea, and lots of hard work, the Peyote Puffer was born in his father's garage. He used every skill he had to fabricate the bike including fiberglass, torch, and gas welding. He stripped off everything unnecessary in true chopper fashion and pulled a peanut tank off a Mustang, welding, glassing, and molding it onto the frame. There were only two items of paint on the bike, the frame with the tank and the rear fender, which was attached haphazardly to the frame. The rest of the parts went to chrome including the cylinders and every nut and bolt. When the parts returned from getting their finish they were set in the den in the family home until Sandy, Perry’s mom had enough. She pushed Perry to finish the Indian in the garage. After months of work, the bike was on wheels, running and ready for the show circuit. Perry made it to the Long Beach Show at the sports arena and then took a trip to the LA Sports Arena.

Shortly after the bike made its debut, the young Perry Sands and the bike hit the road. Literally. It was 1969 and Perry was on a speed run in front of the Golden Sails Hotel on PCH. Perry had changed the stock carburetor in for a Tillotson paired with Sporty mufflers and the bike was running great, a little too great apparently! The front wheel bearings weren’t up to the high speed runs up the coast and the results were disastrous. As Perry came over the bridge a bump at the exit of the bridge sent the bike out of control at 80 plus mph. The bike went lock to lock and finally ripped the bars out of his hands. Perry was lucky enough to find himself on top of the bike and essentially surfed the bike until it spun and spit him off onto the asphalt. He walked away uninjured outside of a few yards of skin he left on PCH, but the Peyote Puffer was smoked. The frame was bent beyond repair the molded gas tank spilled fuel. The frame had to be replaced and the Peyote Puffer was no more. 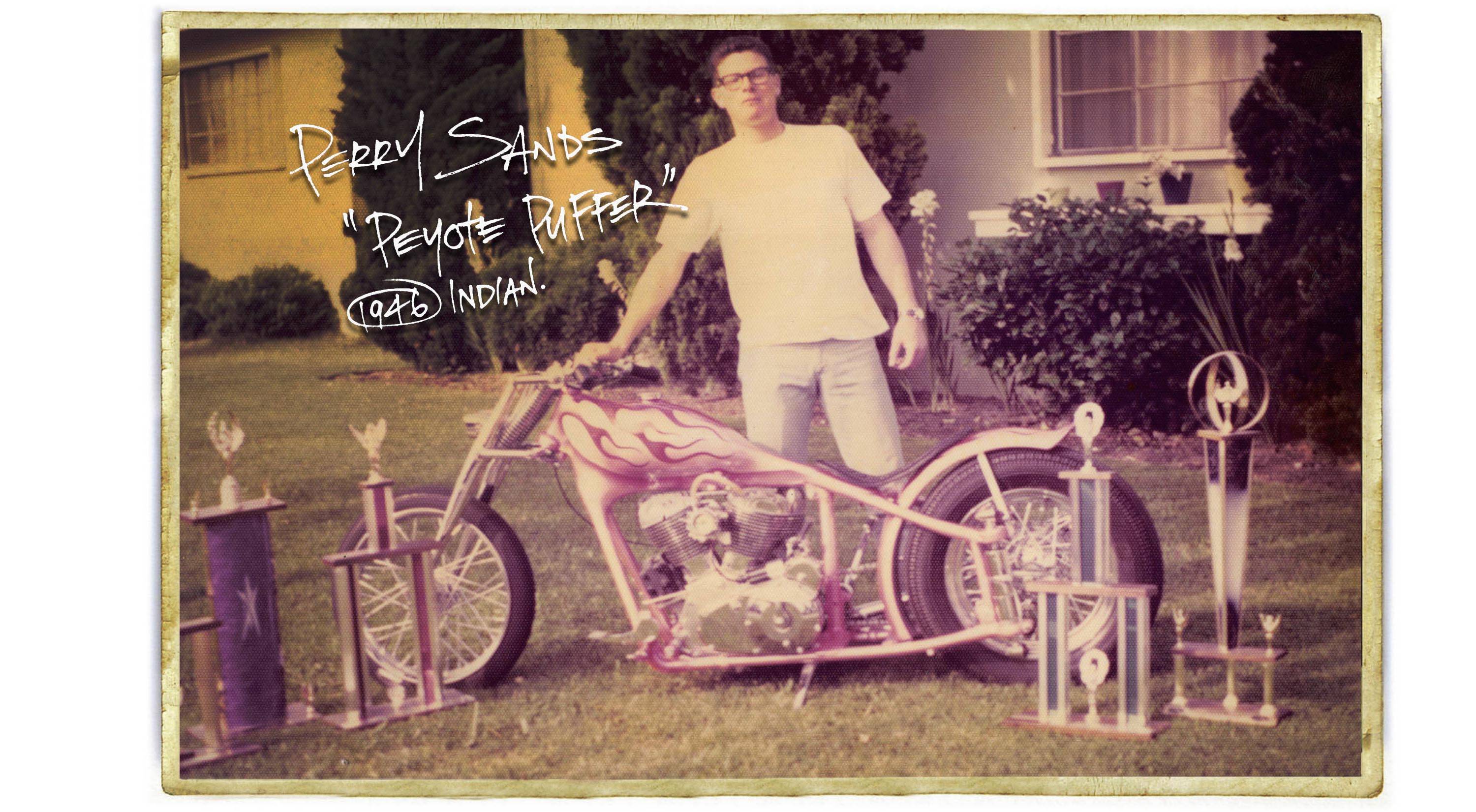 Miraculously, 50 years later Perry was reunited with the original Frame. This was the machine that started it all and inspired the family business, Performance Machine. His son, Roland, who was born into the two-wheeled fraternity has joined forces with his father to see the Peyote Puffer rebuilt for the Born Free Show, originally in 2020 and now for 2021. It was their goal to rebuild the bike from scratch as Perry did years ago. 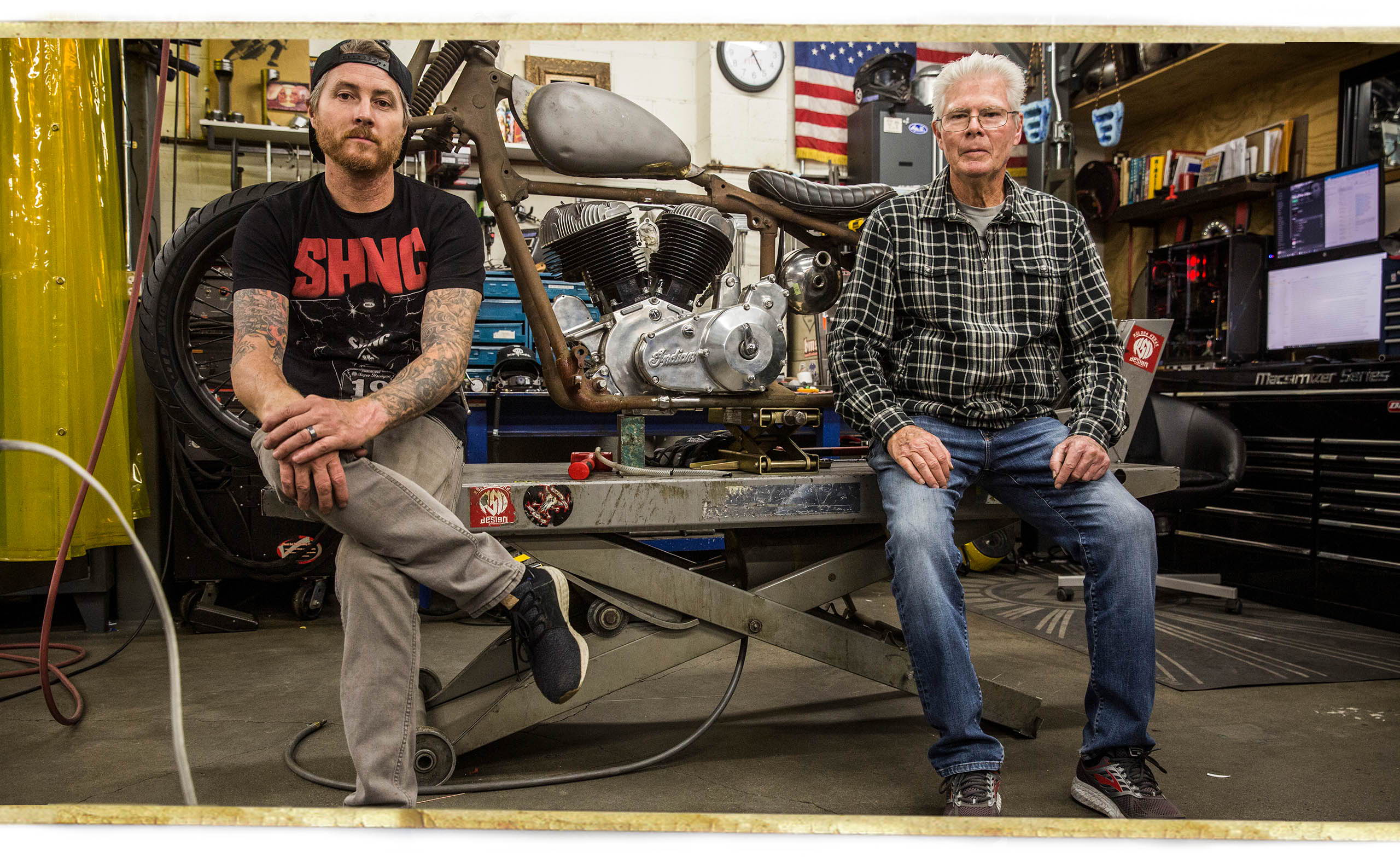 Plans change and the Puffer project was no different. Father and son started with a stock Indian frame and with the original frame looming. Roland began to toy with the idea of using the original frame instead of rebuilding from scratch. It was always in the back of their minds, but the prospect of using a frame that had been crashed and parted out seemed insane. After setting the frame up on the frame table to check for straightness and filling the bike with gas to check for leaks the idea started to become a reality. Why let this beautiful frame with years of scars, scratches, and chips sit, while a re-pop was on the road. 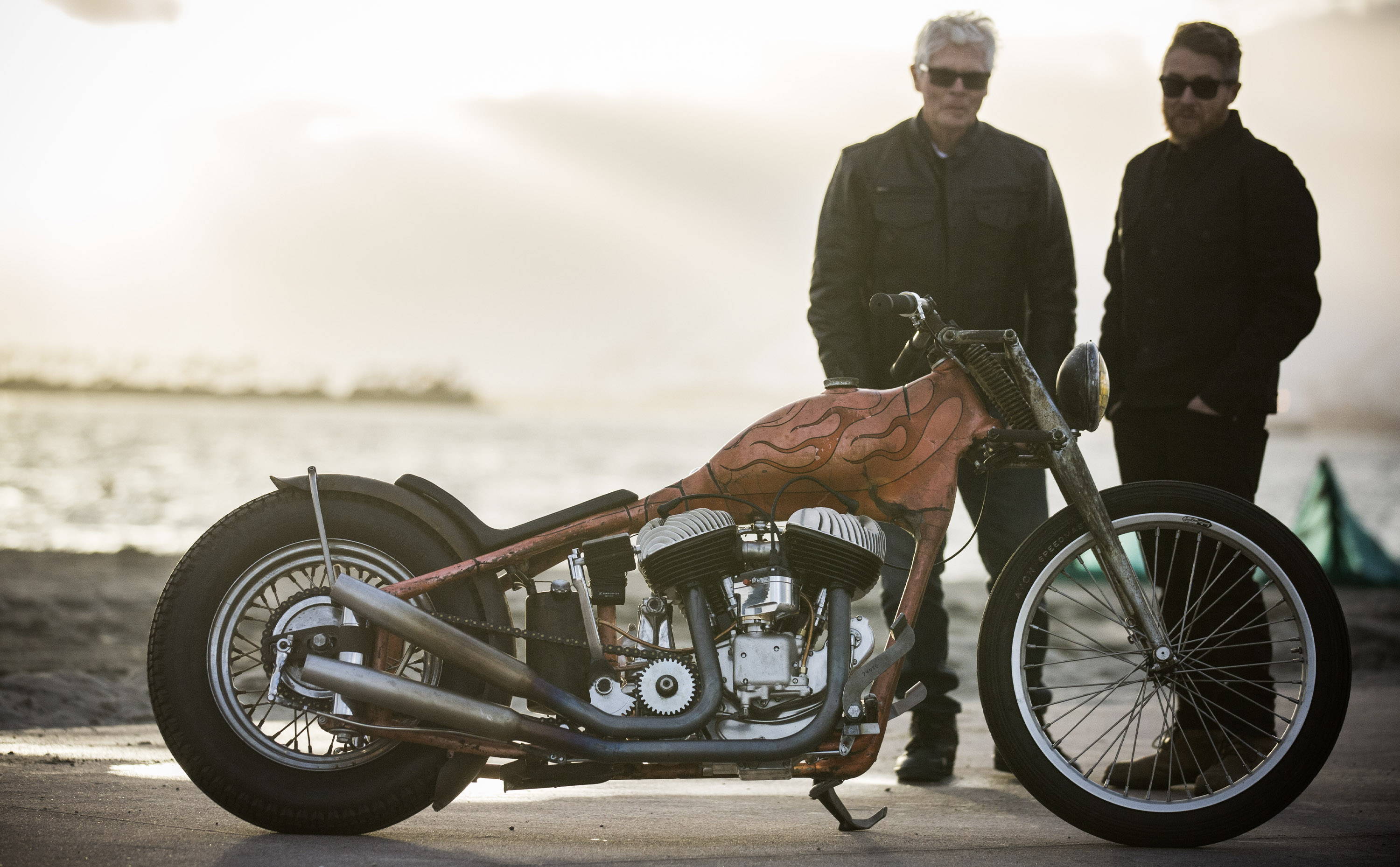 The decision was made to use the original frame and the rest of the bike took shape around Kiwi Mike’s original and first re-pop motor. The bike would be a relic and a chunk of family history back on the road. Using found photos of the original bike and magazine articles, Perry and Roland pieced the machine back together, fabricating and building duplicates of the lost original custom parts. An original fork and rear plunger suspension were used. Original Linkert carb and Morris magneto paired with fabricated exhaust got the engine breathing and firing better than new. Oil bag, oil bag mounts, seat, and seat mount were fabricated with a seat covered by Saddlemen. A headlight was pulled from a shelf. Aaron Boss, the head fabricator at RSD, fashioned up a shifter. Kiwi Mike came through with the remaining bits including kicker gear and hardware, rear-wheel, drum brake, linkage, and every odd nut and bolt needed to keep the bike as original as possible.

After about two solid days of kicking and with some help from Kiwi Mike, the Chief finally fired up and made some noise for the first time in 50 years. Perry immediately jumped on and took the Puffer for its first ride in half a century traversing the bridge where he originally crashed the bike on PCH in Long Beach. Check out this historical build between father and son in person at the 2021 Born Free Show August 28-29th. 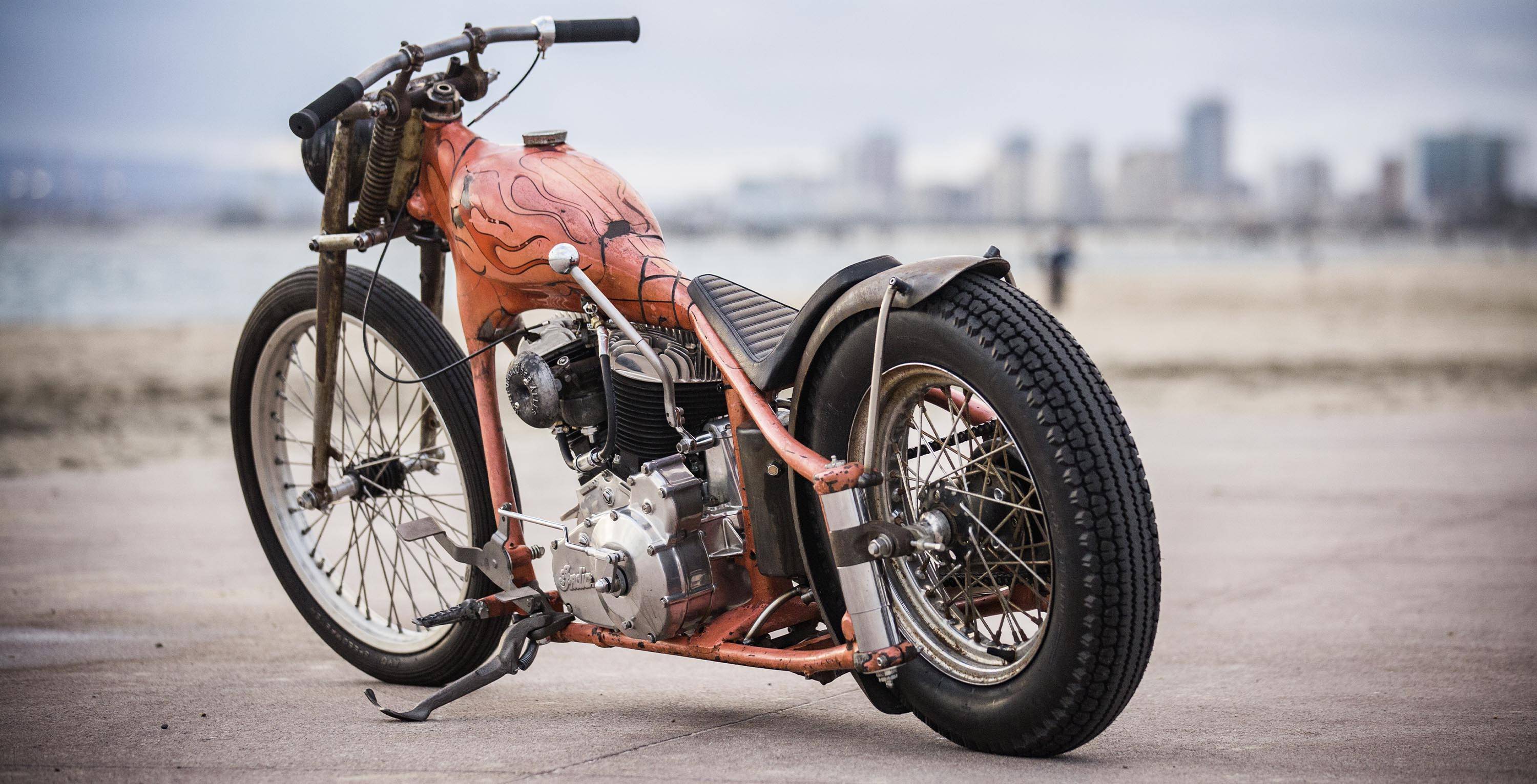 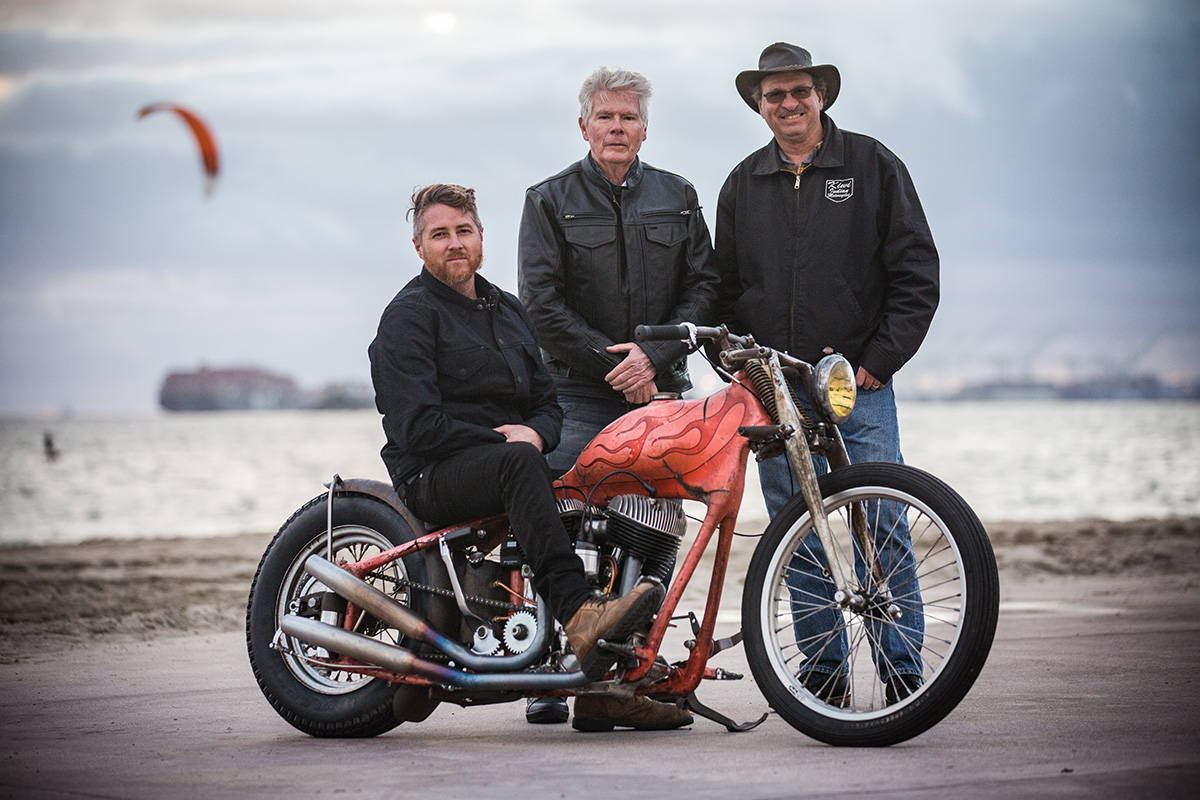 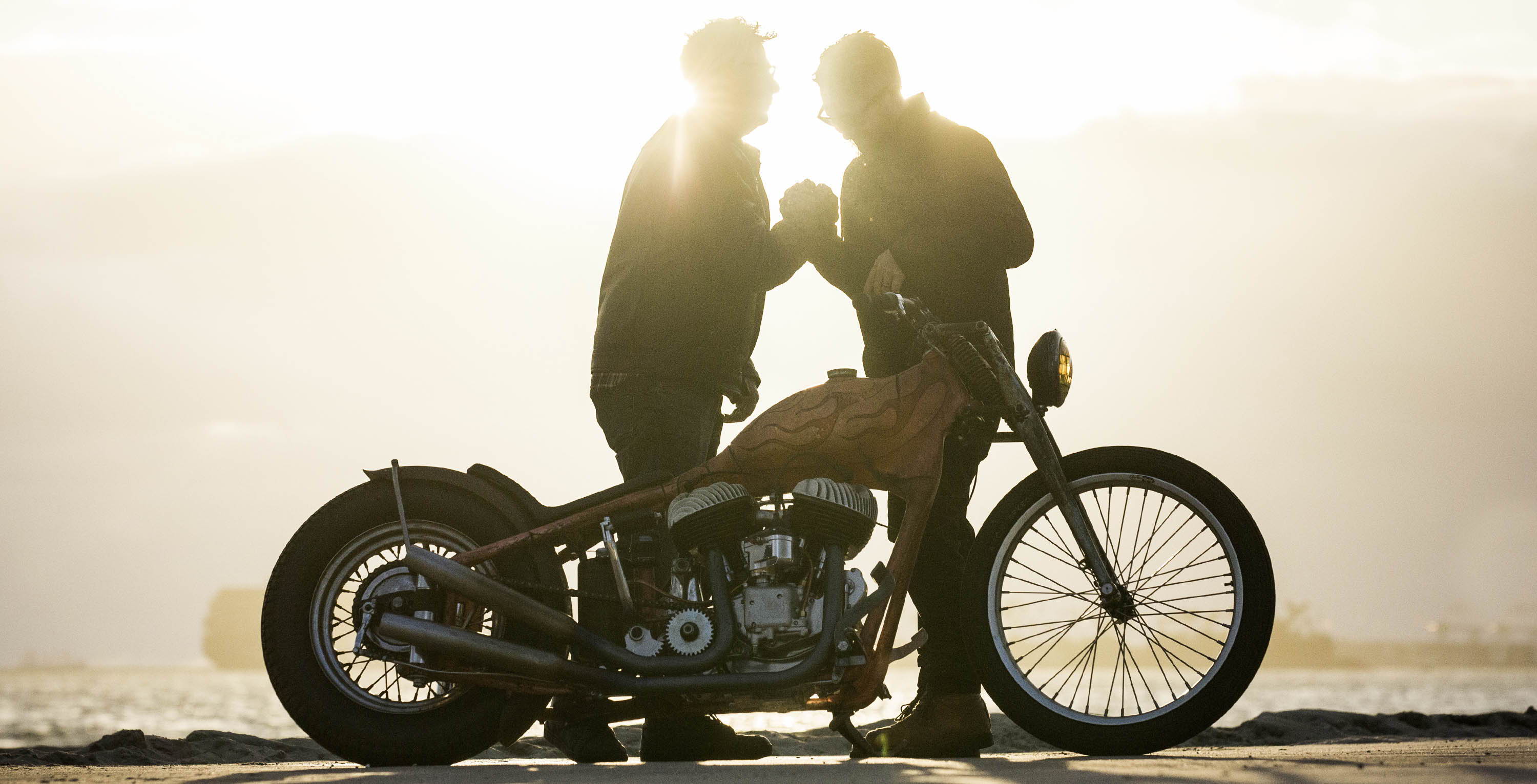