Costa Mesa Speedway opened its doors at the Orange County Fairgrounds a mere 5 miles from Newport Beach the summer of 69, not only was that the best time of Bryan Adam's life it was also the height of surfing in Southern California. Motorcycles and surfing have always had personality parallels and a sort of free-wheeling kinship, so it wasn't a surprise that word of the Australian born two-wheeled phenomenon became a weekly must-attend event amongst that crowd. With skateboarding, BMX and Motocross also exploding around the same time and sharing a similar ethos, Costa Mesa Speedway nights became a cultural epicenter for what still defines So. Cal Moto Culture to this day. Costa Mesa is also the unofficial birthplace for Super Hooligan, around 2011/ 2012 the Speedway as an intermission sideshow had begun letting street-legal Harley Davidson's participate in a 4 lap dash for cash winner take all event. Roland caught one of the races and was enthralled with the idea of heavy street-legal motorcycle racing and banging bars in such close proximity. All of it seemed so wrong, but looked soooo fun. At the next Harley Night Roland and his friend and fellow NFGer Andy Bell showed up and custom built RSD show bikes. The final race was an absolute s#!t show; 5 restarts, crashes on every lap and Roland making a valiant last lap inside move to take the win. Roland was hooked, and Super Hooligan was born. Fast forward 5 years later, and the evolution and progression of Super Hooligan racing has been exponential; at the core, the machines are still twin-cylinder street-legal machines, gone are the ape hangers, saddlebags and stylish chrome flair. Instead, proper 19" flat track wheels wrapped in Dunlop DT03's, low, wide handlebars and the removal of anything that doesn't help you go left faster.

At RD 9 of the Super Hooligan Championship, the typical laidback atmosphere that generally permeates throughout the Super Hooligan pits was replaced by palpable tension. A good or bad performance here could mean the difference of valuable championship points lost or gained as we head to the final round of the SHNC in Bolsa Chica, CA at The Moto Beach Classic where the overall season champion will be determined. 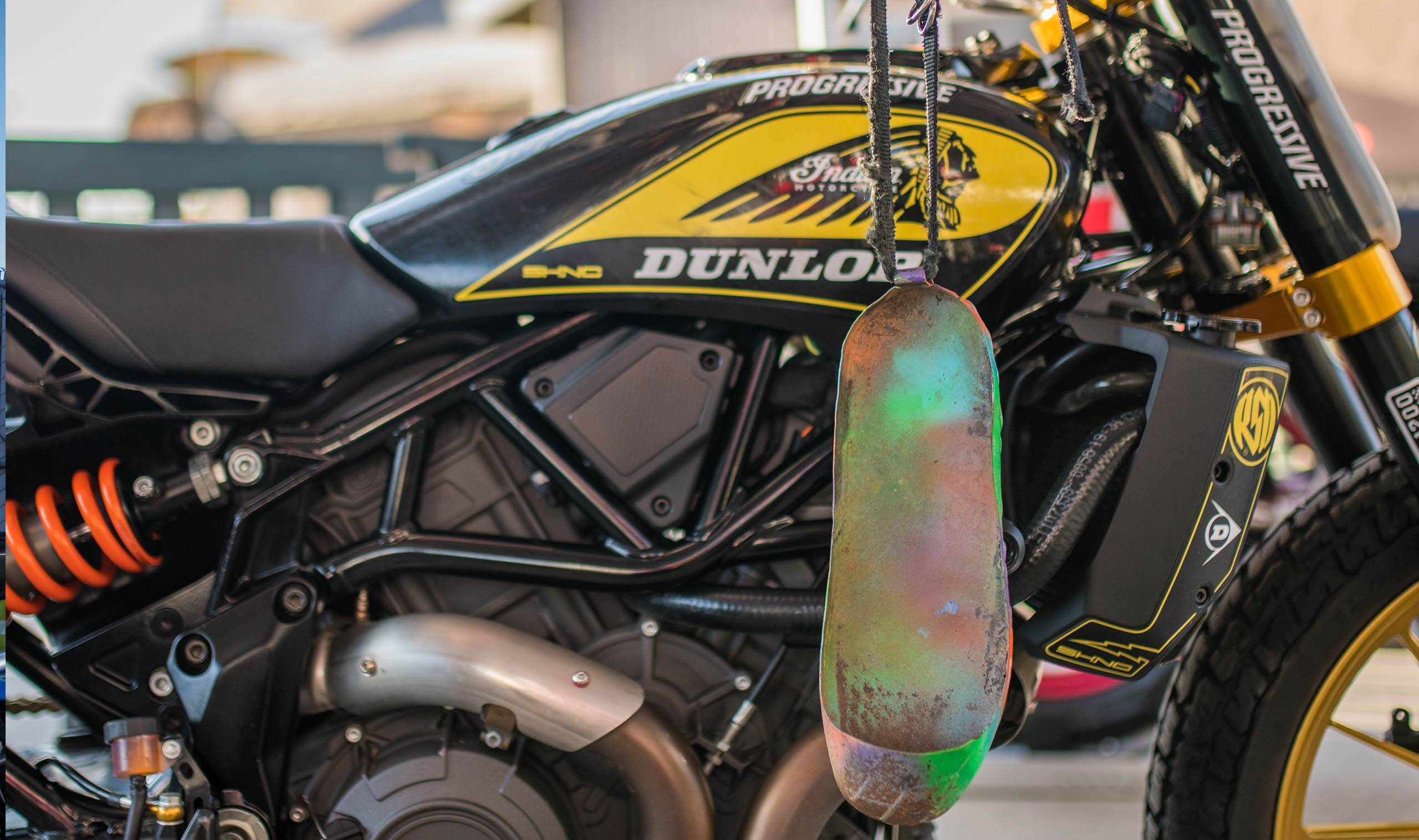 The race format consisted of three rounds of six, 5 rider heats. Finishing order determined their grid position in the following heat. The top 11 after three heats automatically advanced to the main. The rest of the field was subjected to a "B" main with the winner advancing to the 12 rider "A" main event. The 6 riders with the best-combined finishes of their 3 heat races were also automatically entered in the Dunlop Dash for Cash and the opportunity to pocket an extra $500.

Shaun Guardado got off hard in heat 3. @SMCO has seen a tax bracket leap from all the Best Crash checks he's cashed from the SHNC. Shaun's tough as nails though, no matter how dramatic the get off, Shaun's up and smiling for the fans before the bike even stops tumbling. 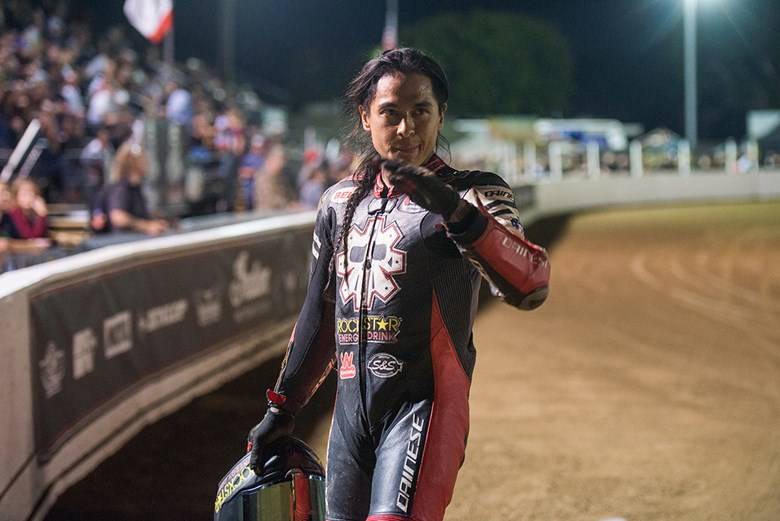 The top 6 finishers after all 3 rounds of heats went to Joe Kopp, Jordan Graham, Tony Alves, Andy DiBrino, Chris McDougal and Josh Sleigh who all got their chance at the extra Dunlop dough in the Dash. As we've seen a lot this season, DiBrino had the quick reaction off the line and lead the pack flag to flag adding some extra cash to his Zebra feed fund.

During breaks in the action, Speedway racers took to their home turf and put on a show for the fans. In most other forms of motorcycle racing, this looks like the beginning sequence of a gnarly highside. In Speedway this is the form of the fastest. 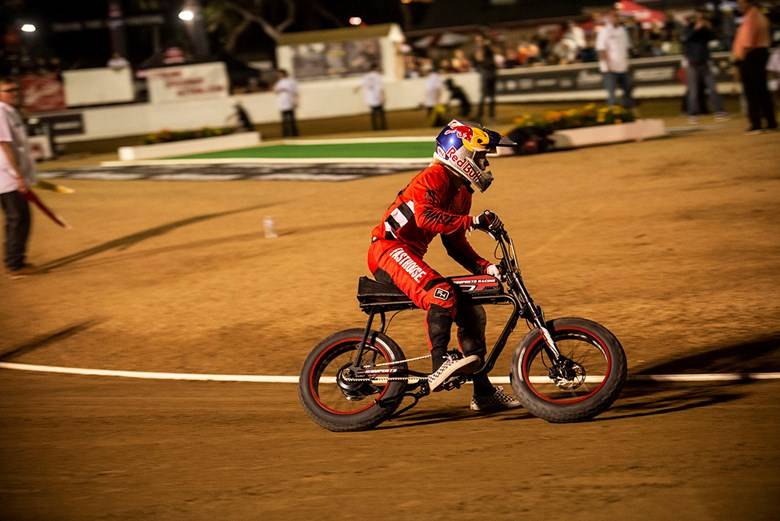 This season the Super73 has been some of the funnest and most exciting action on the tack. The chance to take home a bike at each round has also brought out a deep talent pool from varied disciplines. Costa Mesa didn't disappoint, with an exciting mix of Super73 owners and top-level Supermoto racers, Super Hooligans, Pro BMX'rs and of course your average Joe's who sometimes aren't that average and surprise everyone just like RSD's own Joe Hitzelberger who typically throttles a camera lens and rides a desk laid wood at RD 8 in Sturgis and came away the champ. Joe's magic Buffalo Chip dust must have worn off though because it was the SHNC's own Tyler Bereman who took home the checkers and a brand new Super73. Tyler was joined on the podium by Parker Pitman @pide_pich in 2nd and Vinny Demartino @vinnydrz in 3rd. 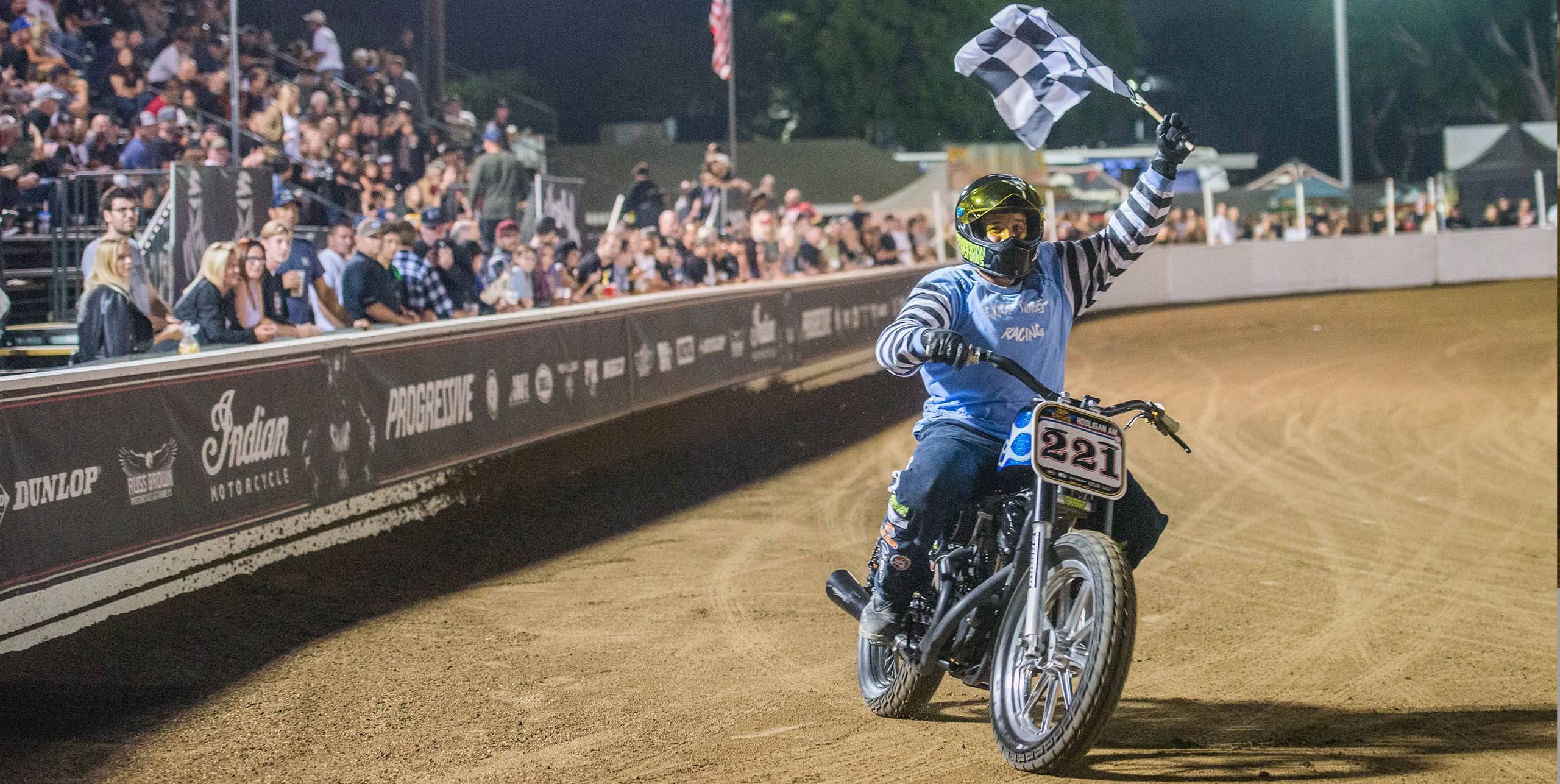 In only his 3rd year racing Flat Track and his first year on Super Hooligan bike, the very fast and consistent Rich Silva @richsilva finally got to hold the checkers on his victory lap for the J&P Cycles Hooligan AM main event. The podium was rounded out with Carlos Sanchez @bumwine in 2nd and Jake Pope @jake_pope816 in 3rd

The Super Hooligan "B" Main was comprised of some speedy riders who in some of their heats were just inches from a win. Riders like Jason Klements @fastjs the Russ Brown Motorcycle Attoneys backed AJ Kirkpatrick @kirkpatrick_12 Scotty "T-bone" Jones @noisecycles and the always smooth Randy Beremen @randybereman

AJ Kirkpatrick had enough in the tank to snag the final coveted 12th position in the Super Hooligan "A" main.

The near sell-out crowd all took their feet as the quickest Super Hooligans of the night lined up behind the rubber bands. Another great start allowed DiBrino a glimpse of a clear track, but an aggressive but clean move by the veteran Joe Kopp @kopp_racing shut the door and gave him his 5th main event win of the year. Andy DiBrino @andy_dibrino kept Kopp honest, and his championship hopes alive with a solid 2nd place, and Tony Alves @tonyalves_16 had what it took to grab the final step of the podium with 3rd

After 9 rounds a mere 8 points hang in the balance to determine the 2019 Super Hooligan National Campion. You do not want to miss the final round of the 2019 SHNC in Bolsa Chica, CA October 26th at The Moto Beach Classic. The Moto Beach Classic in only its third year has rapidly become an anchor in Moto culture. This inclusive event celebrates the motorcycle life as only California can do it. Moto Beach draws racers, bike builders, artists, musicians, and fans from all walks of the two-wheeled life to Bolsa Chica State Beach, CA for a day of action, adventure, art, music, and racing drama. We've cultivated a community of eclectic humans that live a life on two wheels and created an event that speaks to the heart of Southern California, and you're invited.

This year we've once again partnered with our friends at SeaLegs at the Beach, a unique concert venue on the sand to bring a fun line up of punk, funk, metal, reggae, and soul.  Fishbone, Long Beach Dub Allstars, Law, Wargirl, Spirit Mother and the Bent Duo serve as the backbeat to the final round of the 2019 Super Hooligan National Championship series, West Coast Board Riders Surf Comp, art show and custom bike show. Add in Sprint Races, unique vendors, a kids' STACYC electric bike course, delicious food, and spirited beverages, and you have an incredibly entertaining, fun for the whole family event at the beach. GET YOUR TICKETS NOW! 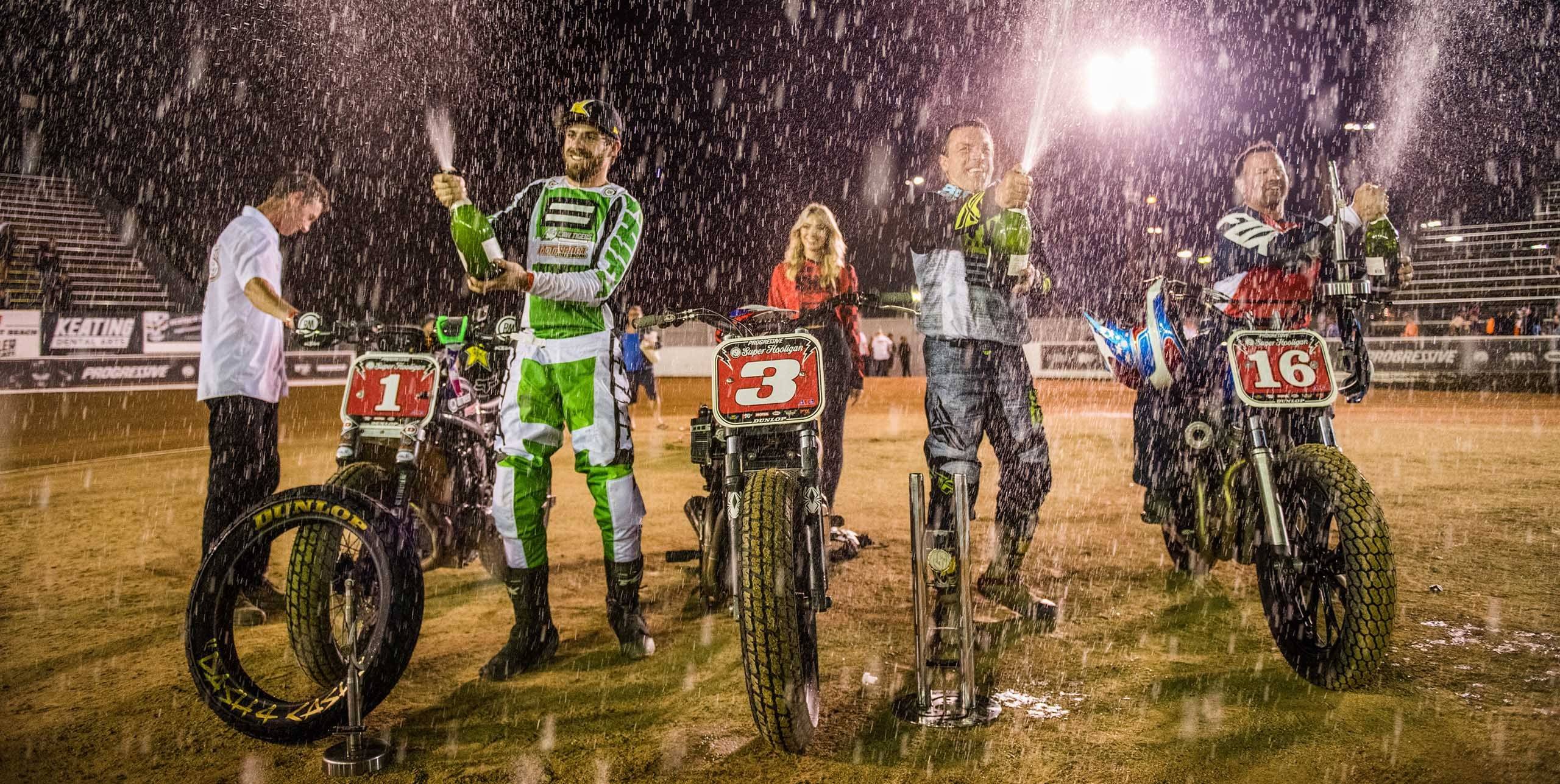 Costa Mesa is the birthplace of Hooligans; what began as heavy street-legal motorcycle racing on the famed Oxley Oval to entertain fans during the Speedway intermission has evolved to the fastest-growing, most exciting form of two-wheeled entertainment on the face of the planet. Join us for Round 9 of the 2019 Super Hooligan National Championship presented by Progressive and powered by Indian Motorcycle as we make the return to our roots at Costa Mesa Speedway September 21st Orange County California. 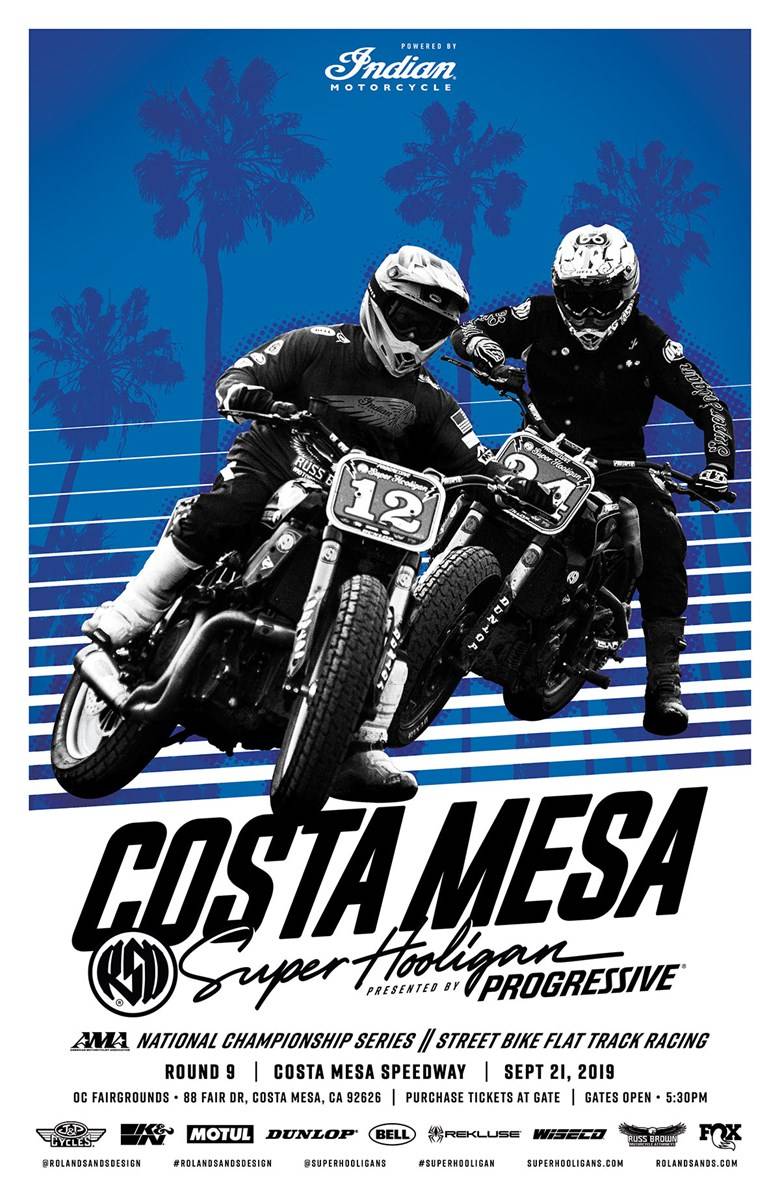