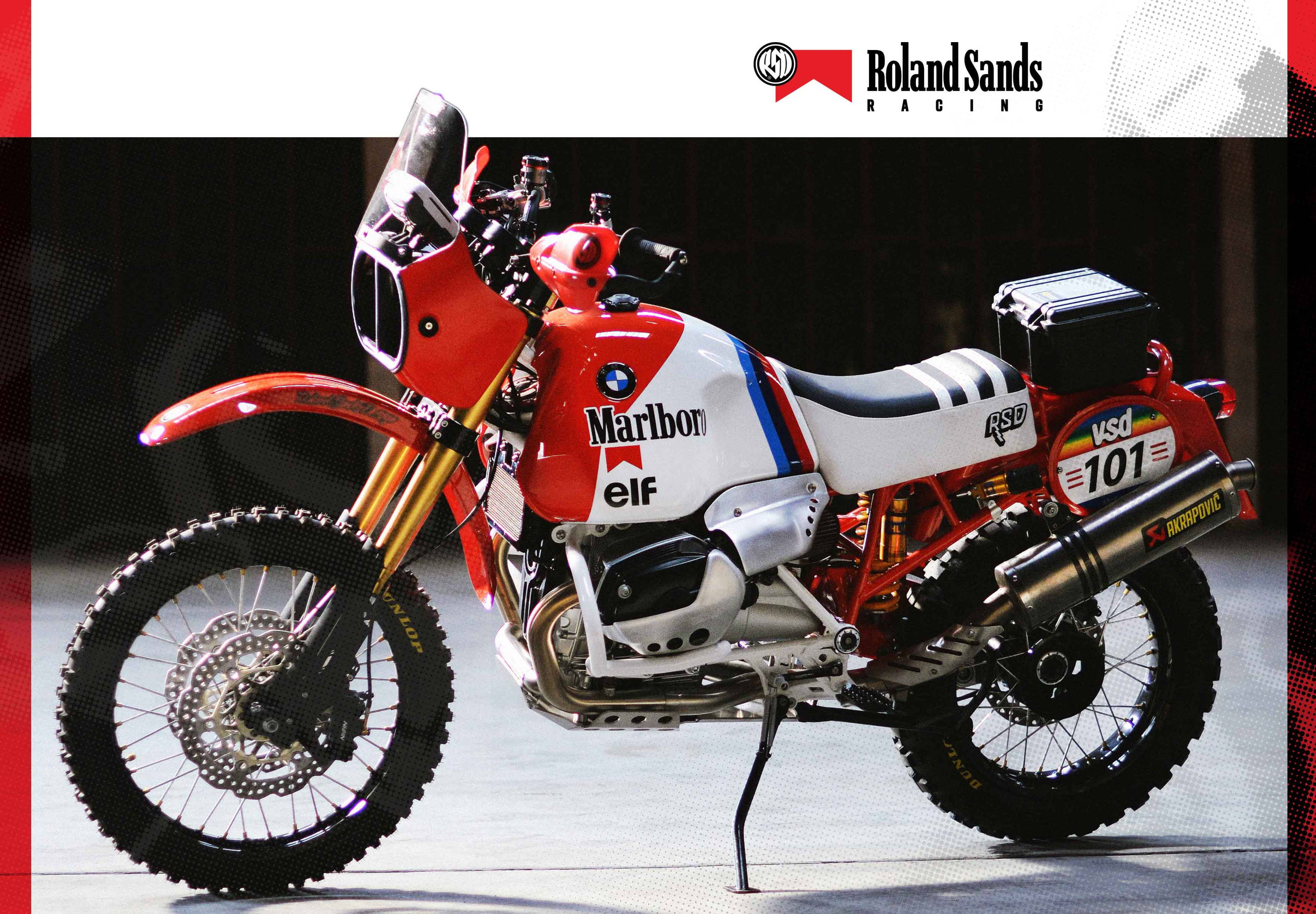 The original Dakar rally is arguably the toughest and most dangerous off-road race in the world. The rally would begin in Paris, France, on New Years' day, testing racers and their machines against the planet's most brutal terrain and conditions for 15,000km over three weeks finishing in Dakar, Africa. The RSD built "DAKAR GS" draws inspiration from the 1986 GS built by BMW race specialist HPN and piloted by two time Dakar winner Gaston Rahier. The team at RSD was able to capture the essence of the 80's works machine and deliver it on a modern BMW R1200GS platform. From the hand fabricated tank to the fully custom front end and subframe, each component was built as if the bike would be competing for a win in the fabled rally. 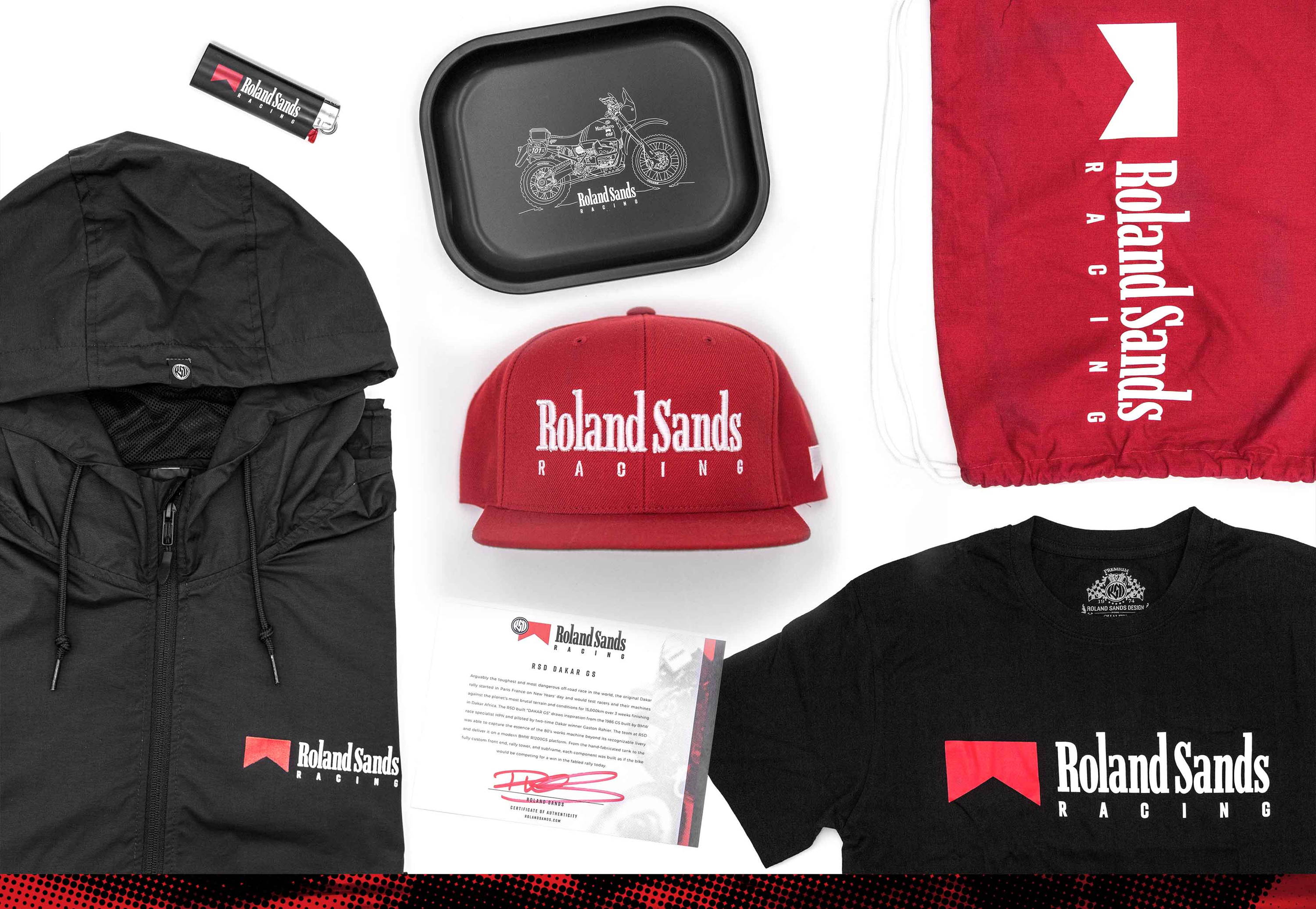 To celebrate the release of this historical build, we've put together a limited-edition capsule collection of curated items representative of the era when the Philip Morris company turned the entire motorsports landscape in to "Marlboro Country." This collection contains an array of premium apparel and accessories, including a packable Anorak pullover featuring the iconic American tobacco logo repurposed with the Roland Sands Design Racing logo and a reflective 101 hit on the back which "reflects" Gaston's race number. Also found in the collection is a Roland Sands Design Racing T-shirt and Snap Back emblazoned with the same logo. A rolling tin, lighter, tote bag, and Dakar GS hero card with a glossy image of the bike on the front and details of the build with Roland Sand's personal signature on the back. The items can only be purchased as a collection and are limited to 150 pieces globally.

The bike rolled into the RSD shop as a 2008 GS 1200. The client had a few ideas for the direction, all of which revolved around turning the bike into a machine more adept at handling arduous technical terrain. Roland agreed and suggested executing it in a neo-retro theme that paid homage to the 80's Dakar era. After a few renders, the vison was arrived, and the teardown began. The first step was to replace the GS's 41mm telescopic fork with a set of oversized 45mm legs from a Honda Africa Twin upgraded with an Ohlins cartridge kit. The task proved to be more complicated than just sliding the replacement legs through the stock triples. Due to BMWs unique fork design, the entire front half of the GS's frame was swapped out for a 2018 BMW R nine T frame. RSD's in house fabrication wizard Aaron Boss, replicated the Africa Twins triple clamps with slight tweaks to fit the R nine T front half, and when it all bolted together, the geometry was almost identical to BMW's enduro HP2, which has off-road chops of its own finishing the Baja 500 in just over 10 hours on its maiden voyage in 2006. The tank is off an original 1986 GS, modified and retrofitted with the modern GS EFI electronics. The subframe is original with minor fab work for a retro look and to accept the 86 era fenders, custom Saddlemen seat, and survival box. The breastplate was hand machined from aluminum and built to replicate the line of BMW breastplates offered on the RSD website.

Lighting the way on those dark African nights can be a challenge, but lucky for us the folks at Baja designs had a solution in the form of two XL Pro LED headlights housed in a hand fabricated rally fairing. Gone are the old roll charts from the 86 Dakar bike; instead, we opted for the more modern and reliable Lowrance Elite-5 Ti GPS unit to help navigate the desert or locate the closest pub. A Scotts steering stabilizer compliments the ProTaper Evo bars and ensures no tanks are to be slapped even at full onion through the siltiest of silt beds. AEM Factory Titanium/carbon fiber brake and clutch levers and a Raceco custom rally tower finish off the rider's cockpit. Oversized hubs and spokes are held together with a 21" Excel in the front and an 18" Excel rim in the back, both wrapped in a set of terrafirma displacing Dunlop D908RR's. a set of twin K&N air filters help the retro beast breath while the massive Akrapovich dispels of all the bad air. Air Trix came in clutch with the spot-on retro livery, and finally, Motul's 300V Synthetic motor oil ensures the mighty GS's engine is equipped to withstand the abuse of 150 mph washboard roads, soft sand dunes, 100+ degree weather, and 12hr marathon stints. The Dakar GS made its public debut earlier this year at the One Moto Show in Portland, and we were stoked to walk away with the EURO ALRIGHT AWARD. 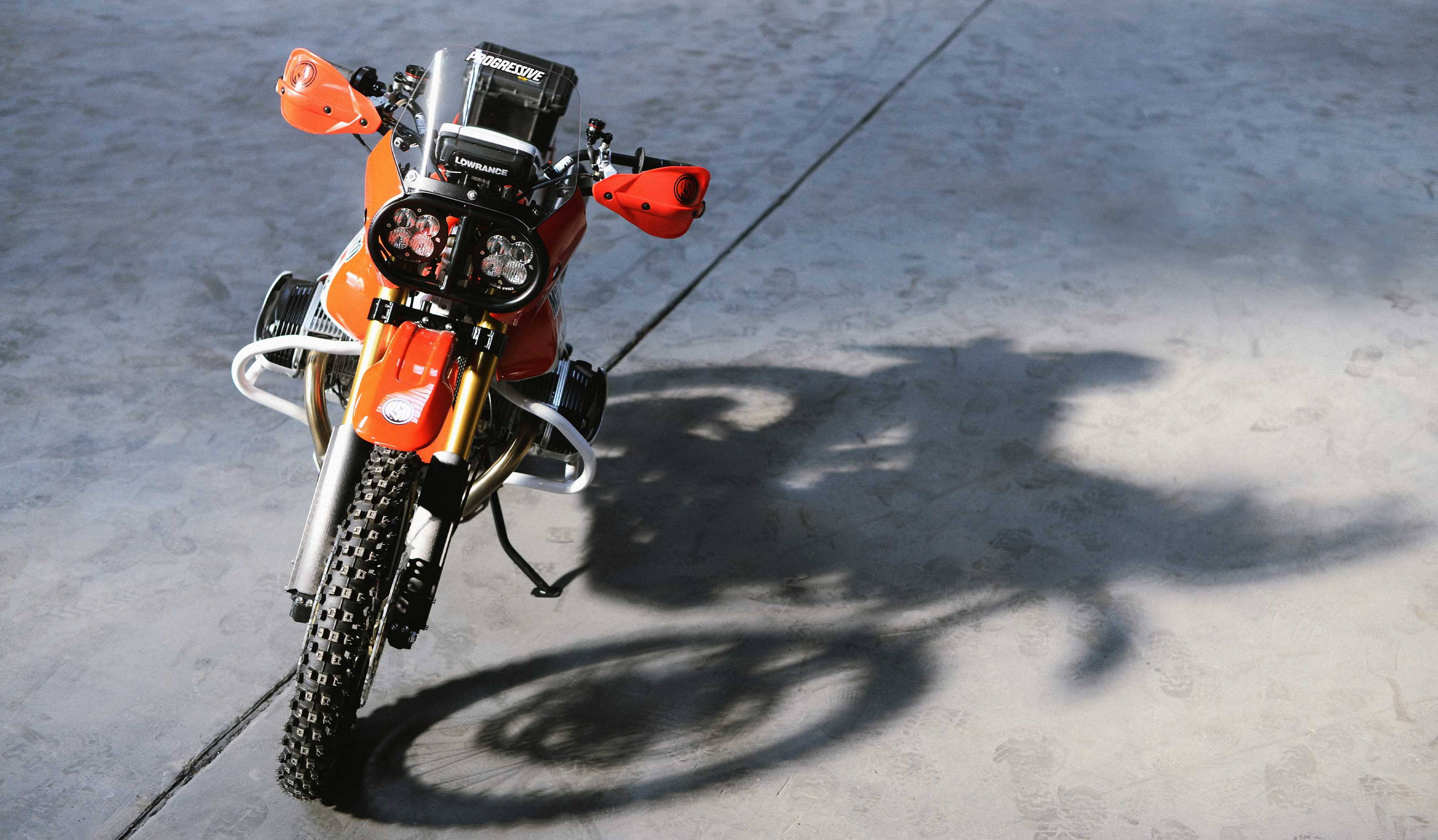 Photos below by Joe Hitzelberger 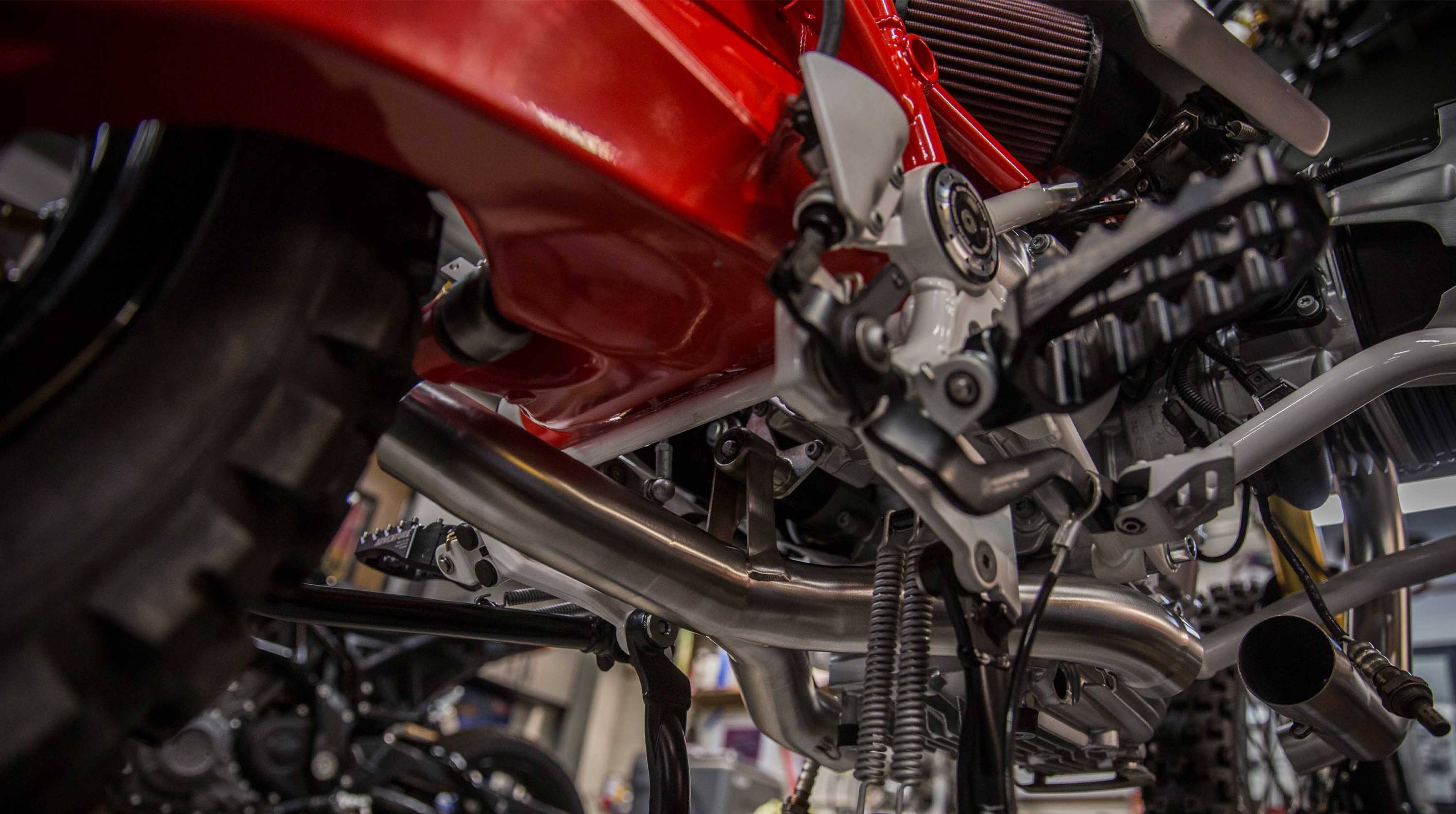 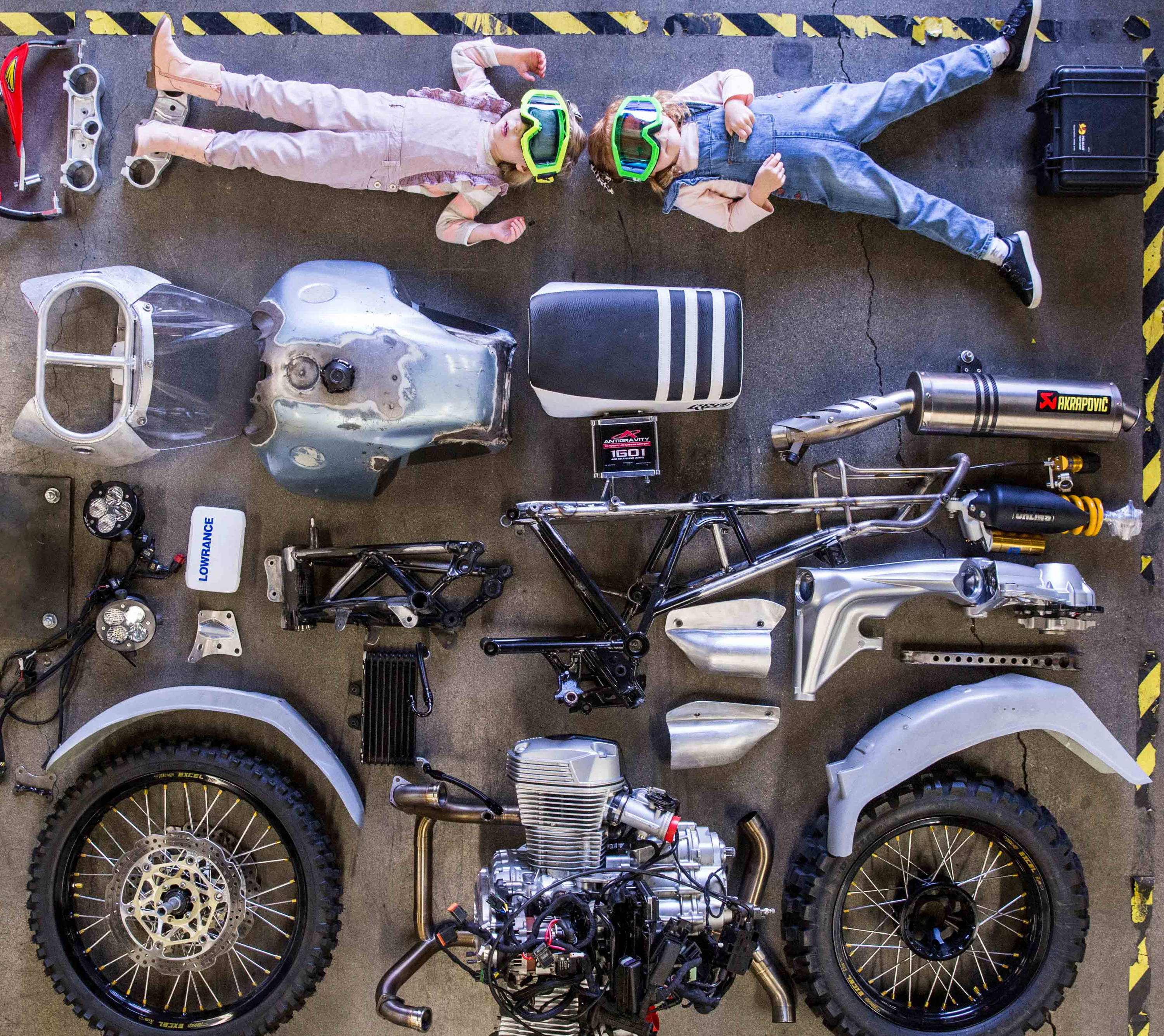 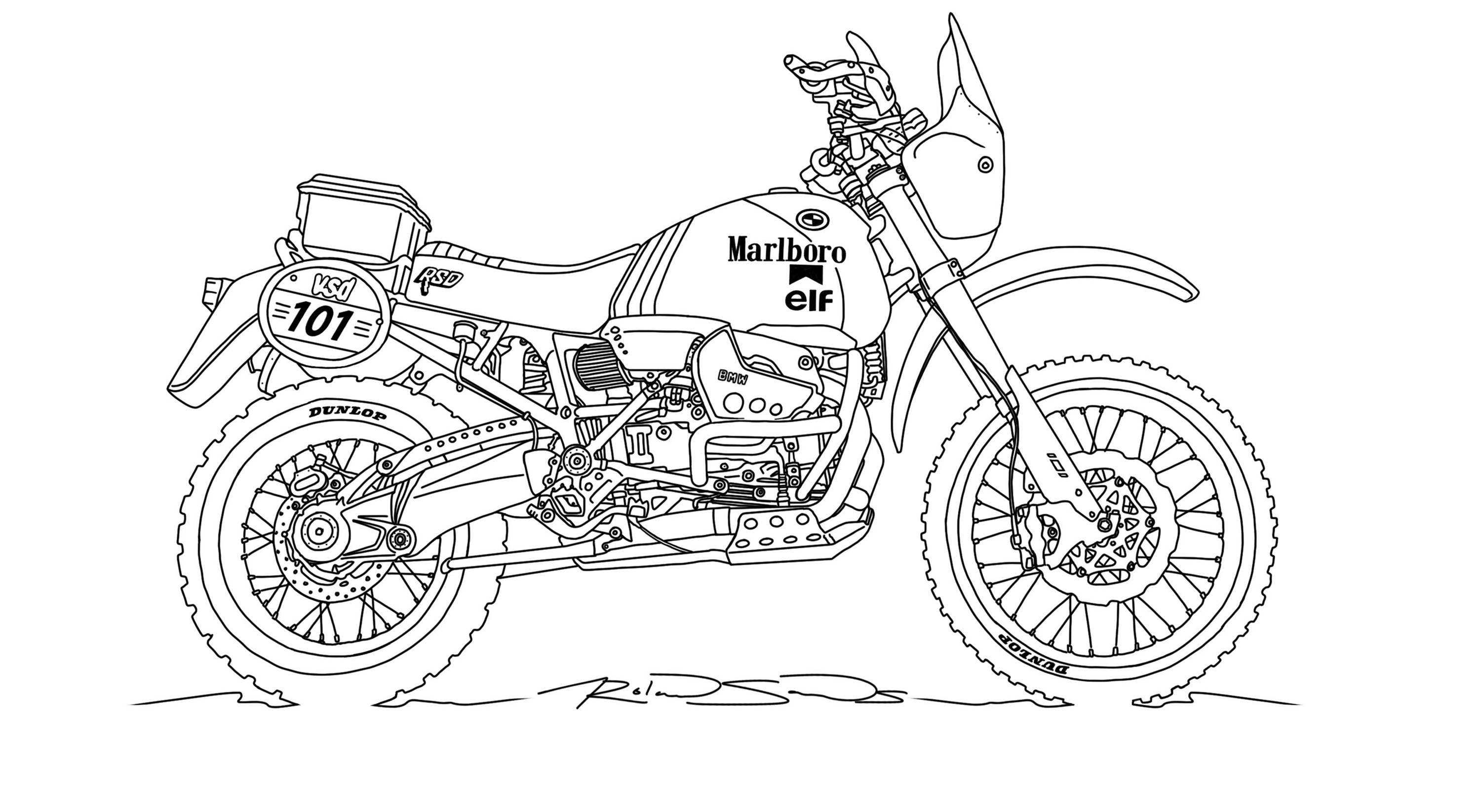