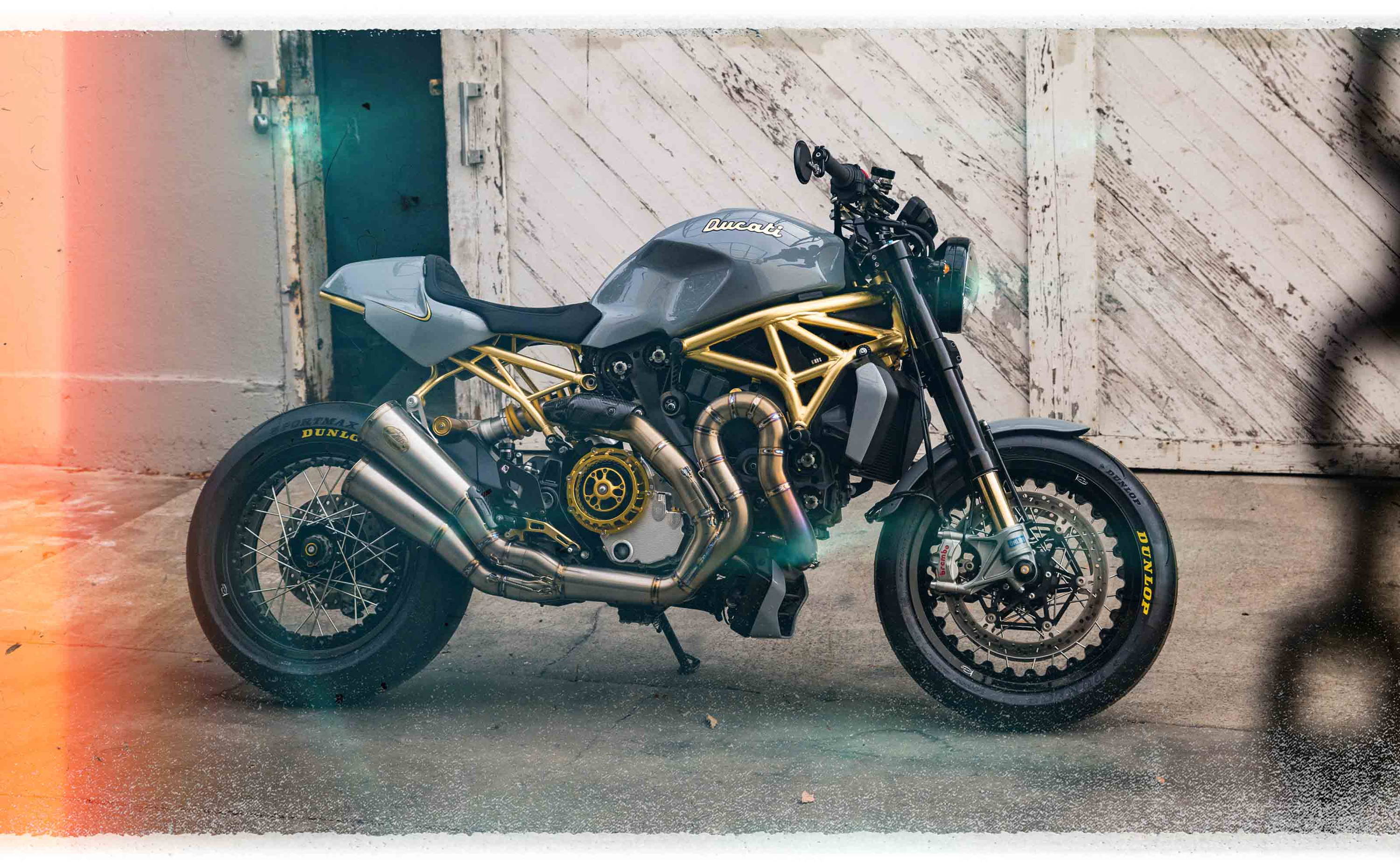 The Ducati Monster is one of those machines that you can’t help but want to tweak. It’s been a favorite of customizers since it’s introduction in 1993. The Monster has gone through a few functional changes while still keeping its original raw and somewhat classic feel of a bodywork free Ducati streetfighter. The latest version is no different, but it’s moved in a direction of a more high-performance bike. As it’s moved that direction it’s lost a bit of it’s classic flair and not everyone is a fan. Our version of the Monster started out as a 2019 Ducati Monster 1200 S with all the high performance goodies. The owner didn’t’ want to lose any of the stock bikes function, but wanted to upgrade parts, lose a little weight and do a bit of a classic rewind with a standard round headlight conversion and tracker inspired tail. He spends a lot of time riding with a group of guys on Harley’s, but a Harley was not his bag. Different degrees of a V-twin as it is, but he wanted to throw a little flash at the bike as well. Call it a Classic Canyon Carver Custom. 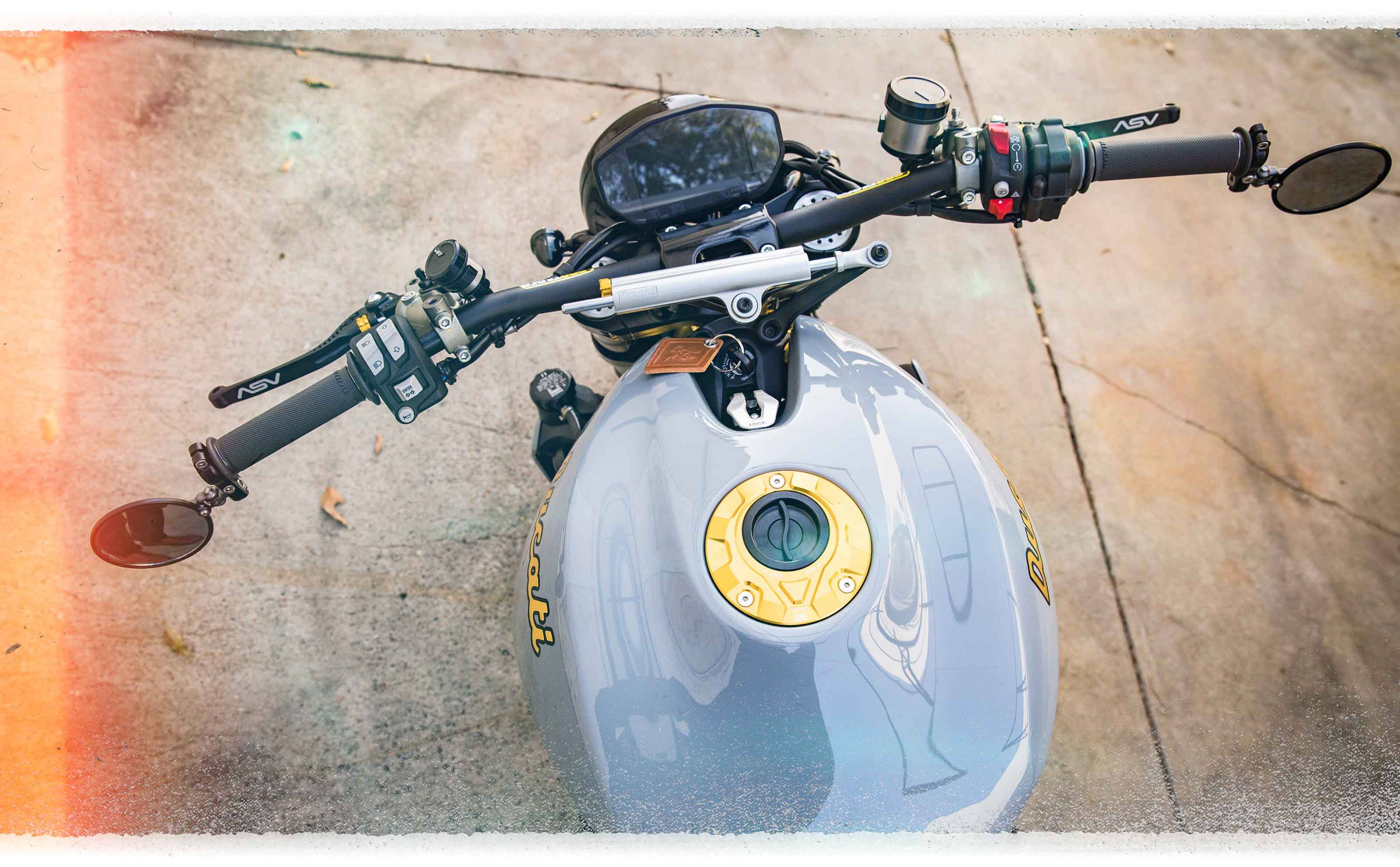 The mods started in the RSD fab lab by removing the cast aluminum stock subframe and replacing it with a handbuilt chromoly steel tube trellis version and handmade aluminum tail section. Fabricator Aaron boss trimmed the stock fuel tank to align with the seat line while also removing electronics from under the seat to allow the subframe to breathe and expose the Ohlins shock. A Royal Enfield GT650 front fender fit the bill for some retro styling and was fitted to the front fork with some custom fabricated mounts. Saddlemen knocked out the custom leather and Alcantara synthetic suede covered seat. Stock timing belt covers got put under the knife to pocket them out and expose the internal belts and gears.

The stock headlight was replaced with a round Ducati Sport Classic unit with LED replacement internals from Revival Cycles and RSD turn signals. Ohlins forks were removed and re-coated in a slick black anodize and a GP Suspension cartridge kit was installed and they were remounted to the machine using a CNC Racing billet triple clamp and Speedymoto tapered steering bearings. Pro Taper handlebars, Renthal roadrace grips and CRG bar end mirrors, ASV folding levers, AEM Factory integrated titanium fluid reservoirs keep the ergonomics tidy in the cockpit. Ducabike billet rearset foot controls dialed in the foot position. Spoked 17” wheels came from Kineo via Brock’s Performance and were custom built in black and stainless steel and wrapped in Dunlop Q4 tires. Wheels are held securely in place with Aella titanium axle nuts and rear taper cone setup. Superlite 520 chain conversion with billet quickchange sprocket carrier, polyurethane cush drive upgrade with titanium hardware and DID chain help to get this machine moving a bit quicker. Crash protection is covered with Aella frame sliders, axle sliders and water pump cover. All of the gold anodizing throughout the bike was handled by RSD by first stripping all of the red anodize, from the production aftermarket parts, then re-dipped all together in a bath of gold so they came out matching. The devil is in the details and the more you look at this bike, the more of both that you will find. 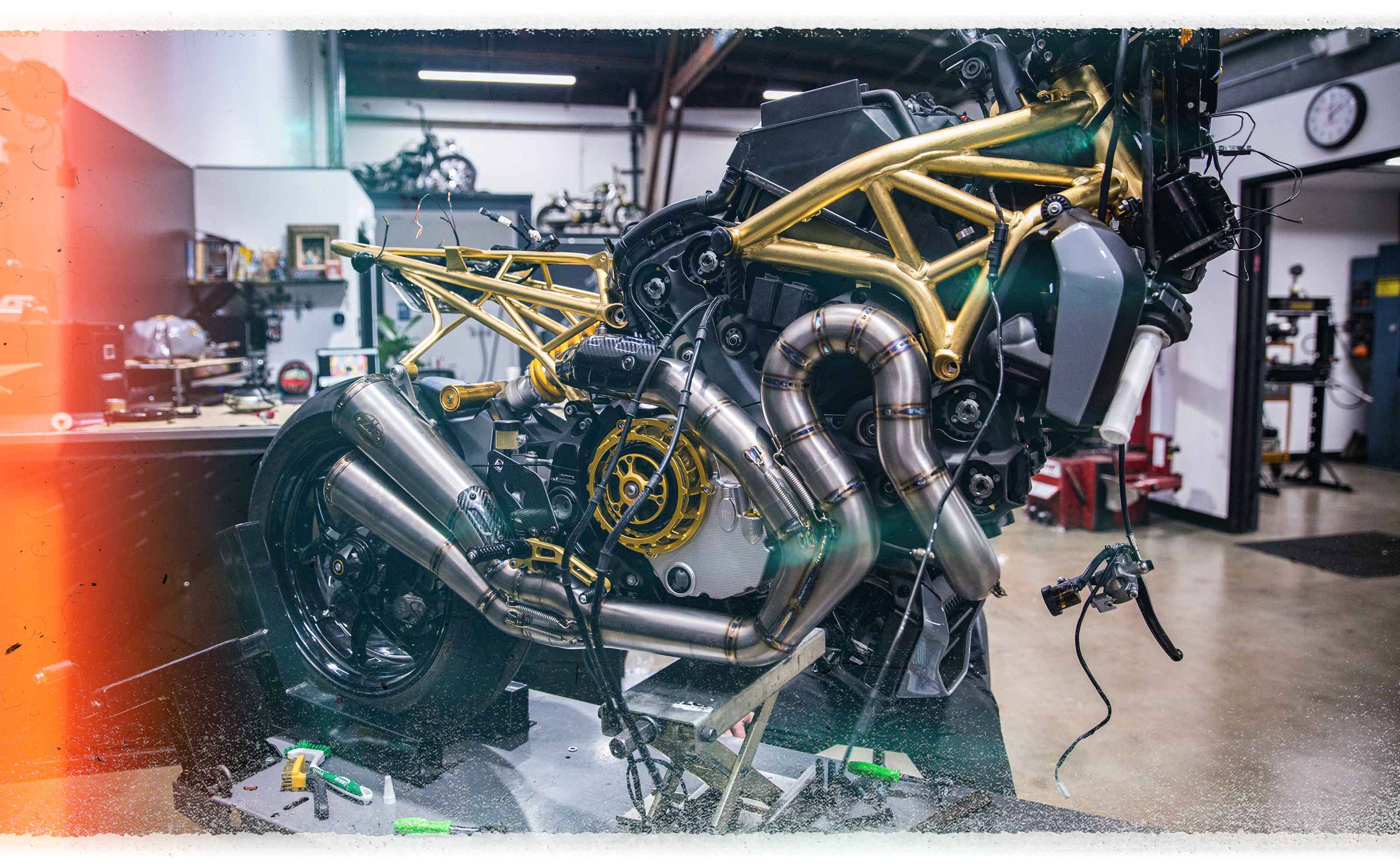 Performance upgrades were kept to a minimum but we made sure to do enough to wake up the beast within. Zard made a custom Titanium 2-1-2 exhaust system and shipped it over fresh off the work bench in Italy. Boulder Motorsports reflashed the stock ECU to match the timing and fueling with the less restrictive exhaust system. STM Evo GP dry clutch conversion brings back some of the signature Ducati rattle and performance from the past. Engine was topped off with Motul 300V racing oil to keep it protected at full song while flying down the highway.

And that frame… this was a first for us and we’ve always wondered what it would take to do a completely gold leafed frame. Chris Wood at Air Trix was up for the challenge and dedicated his time and energy to doing something he’d not done before. The frame and subframe are 100% gold leafed on every surface. The Body work was covered in a simple battleship grey with a classic Ducati tank logo in gold leaf to match the frame. 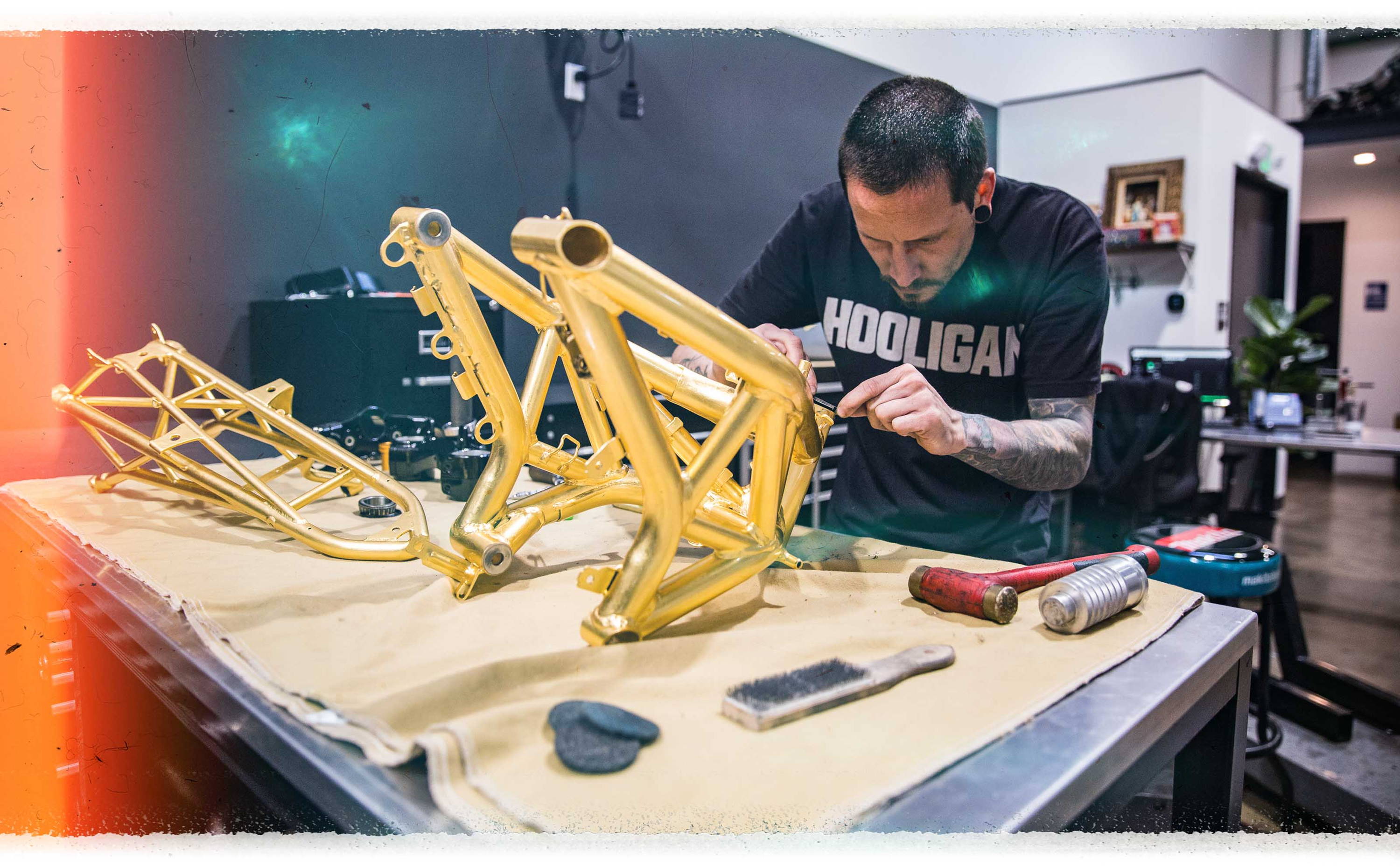 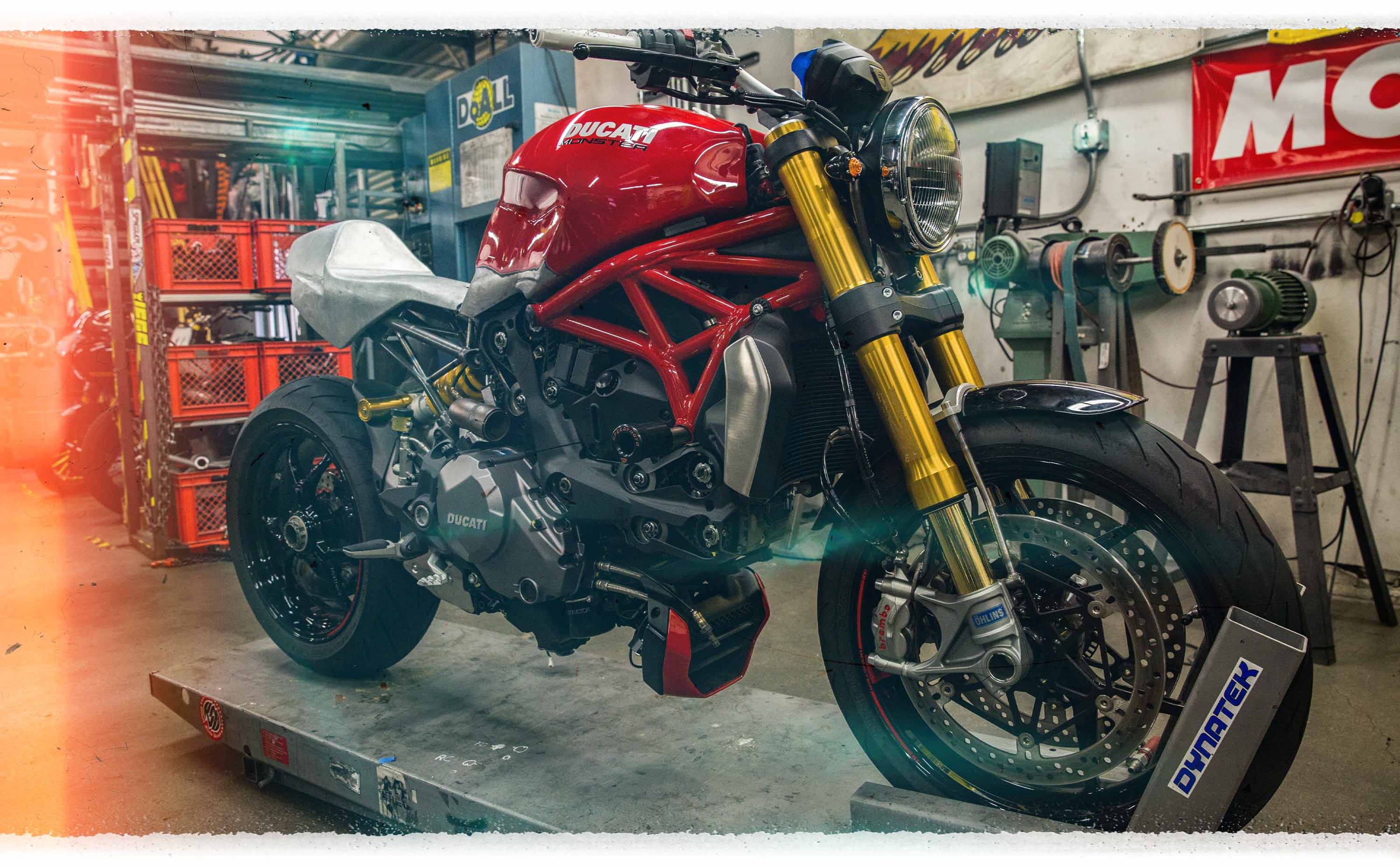 The Ducati Monster. It’s perhaps the most customized of all Ducati’s and has been a staple in the Ducati line-up for many years. One part performance, one part street fighter and all parts Italian attitude. Any body who’s ever lusted after the Italian brand can appreciate the bikes muscular stance and aggressive tilt. The monster has gone through it’s share of changes and as much as the bike has improved not all love the new future driven aesthetic. Some prefer the classic take on the Monster, but with the added performance benefits of the modern bikes. That’s where this project has found it’s sweet spot. 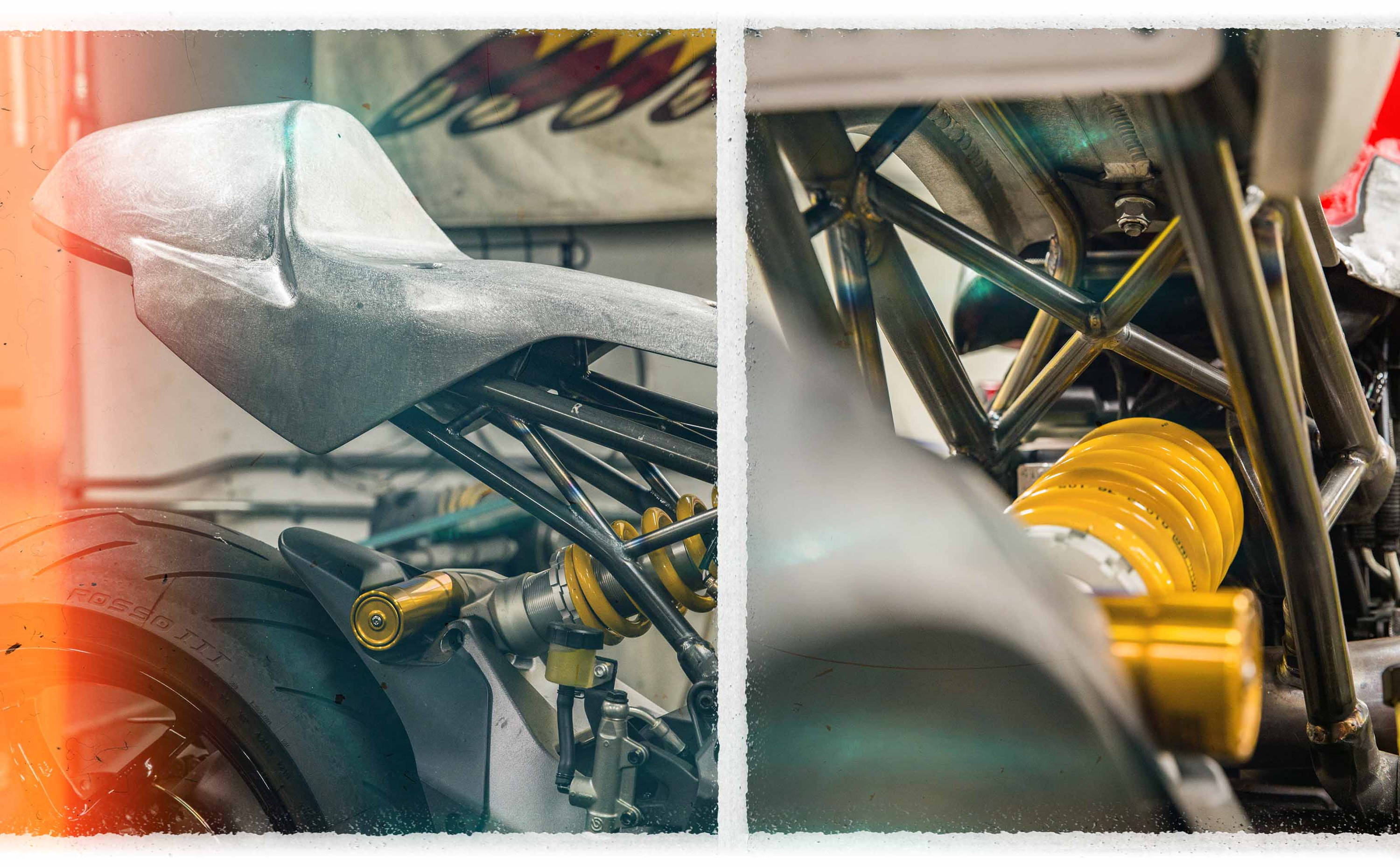 We started by replacing the stock subframe with a hand fabricated tubular unit and relocated the items under the seat. We wanted to lighten up the design so showing a little air through the bike was a focus and the new subframe helped with that. Next up we built a new tail section with a little tracker inspiration and trimmed and modified the fuel tank to show off the opened up belt covers of the Desmo valve train. This bike is about exposing parts rather than covering them up and doing all that we can to show off that beautiful motor. The front headlight was pulled off the shelf at Revival cycles who’ve made a great little led bulb that looks classic yet lights up the highway. Next up is a full titanium exhaust, dry clutch and a number of other goodies we’ve sourced from the Italian Ducati Mafia as well as a crazy set of black on black spoke wheels to continue the classic direction of the bike. 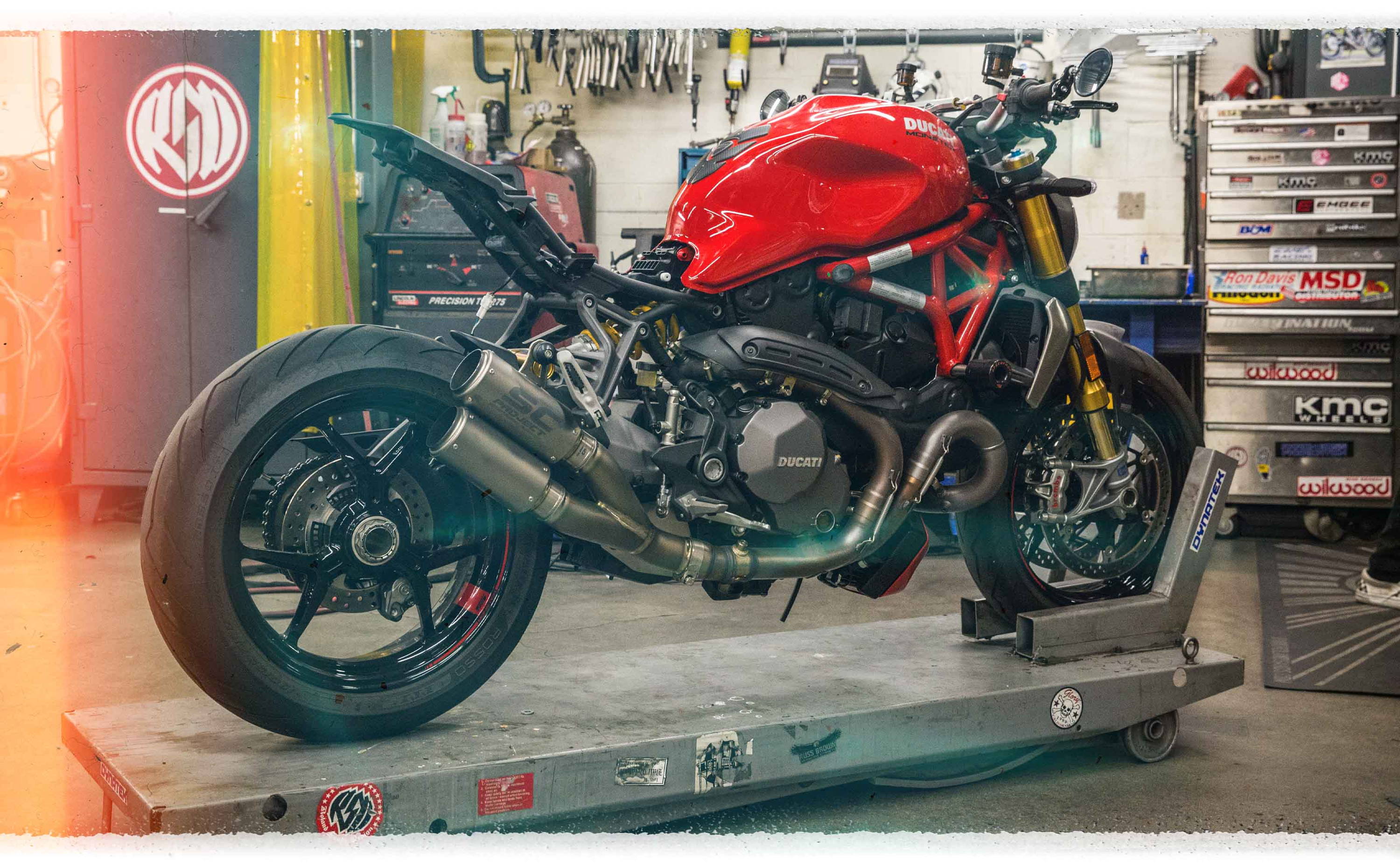 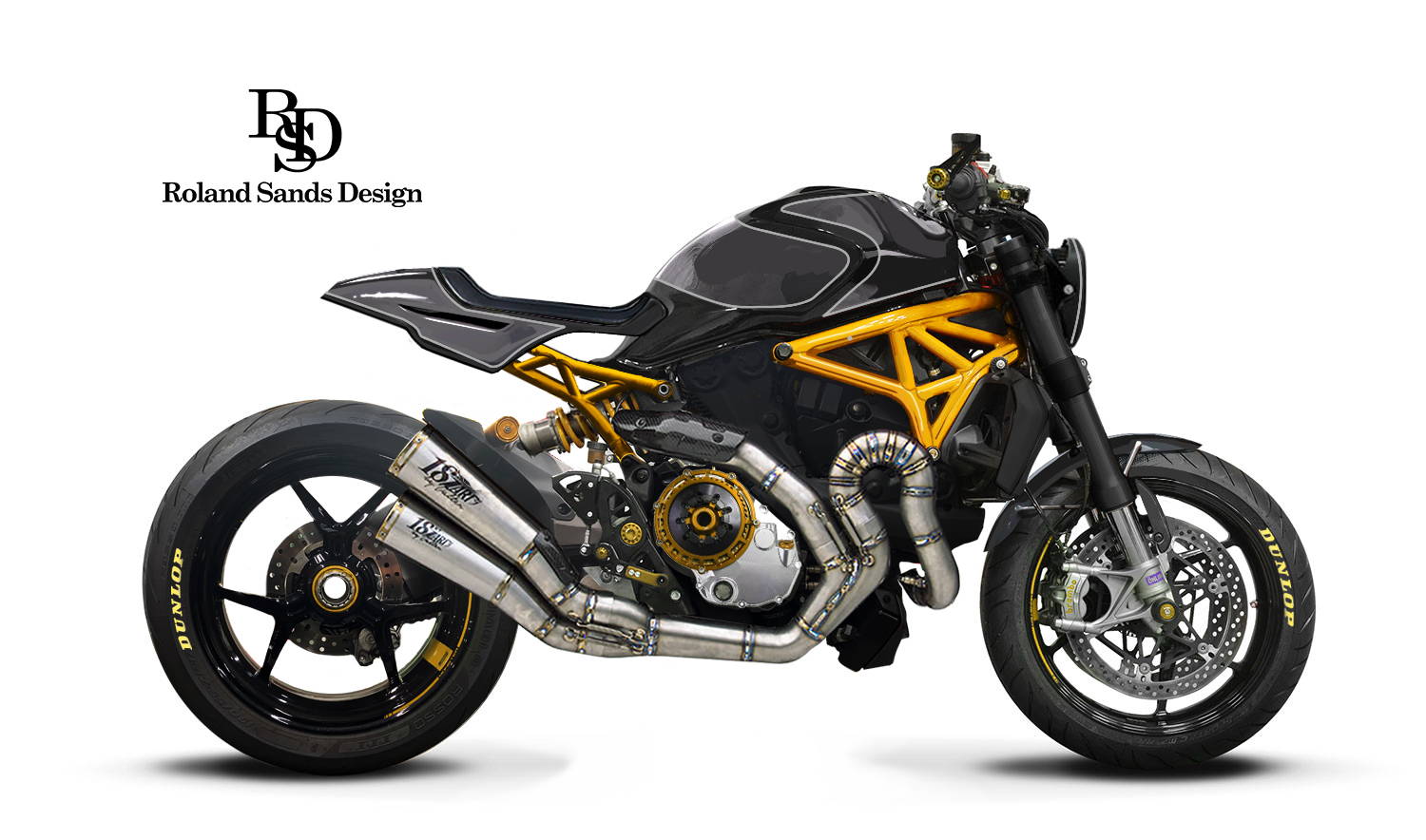 The owner loved the performance of the new bike, but was aesthetically wanting to go towards the original Monsters look but with a touch of custom thrown in. 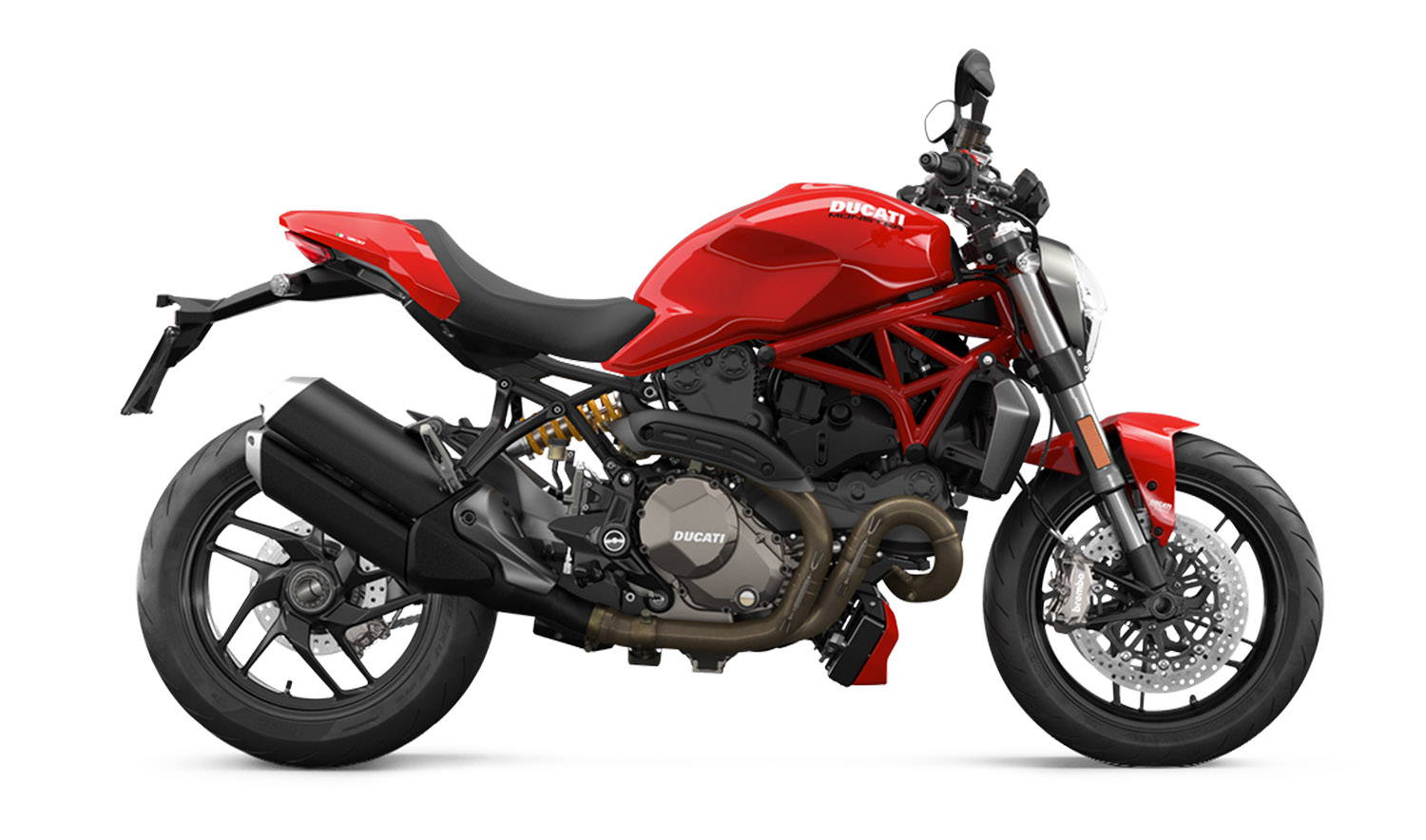