The Handbuilt Motorcycle Show in Austin, conveniently takes place on the same weekend as the famed COTA Moto GP as well as the COTA GNC Flat Track. The event is a mash up of racing, custom and culture creators. You have the crème de la crème of custom motorcycles from builders like Max Hazzan, Shinya Kimura, our own Roland Sands and of course the shows originator, Revival Cycles. Moto GP and Moto America is happening right down the street so guys like Wayne Rainey, Kevin Schwartz, Jason Lee and Keanu Reeves are in attendance. You throw in the American Motordrome Wall of Death with some craft cocktails inspired by Paul D’Orleans of the Vintagent, some original motorcycle inspired artwork and one would think it couldn't get any better. Right?
We thought so too… and then the city of Austin allowed us to run an RSD Super Hooligan short track in the middle of downtown, at The Handbuilt Show. And race on it. It took the team from Indian Motorcycle, Revival Cycles and Roland Sands Design a hell of an effort to make it happen, but happen it did.
Austin Heat Races (Super Hooligans at end of video)
http://www.fanschoice.tv/ama-pro/player/ama-pro/2016-lone-star-half-mile-–-heat-races-–-ama-pro-flat-track946
Austin Main Event
http://www.fanschoice.tv/ama-pro/player/ama-pro/2016-lone-star-half-mile-–-super-hooligan-main-event-–-ama-pro-flat-track5670
Images by Preston Burroughs 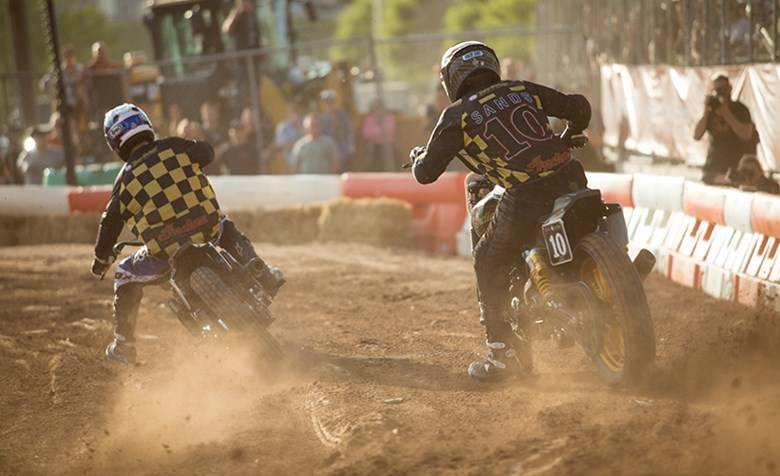 In 48 hours Brian Bell and the relentless crew of IV League Flat Track took a gravel parking lot, too many tons of dirt to count, over one hundred orange and white barriers and built a solid sure bet of a race track. Our money? On the Indians, of course.

“We’ve got a really cool eclectic group of people that have come out here and met in the middle of the country to ride their motorcycles on a track we built in two days. I couldn’t be more excited!” - Roland Sands

The sun was setting, the light draping the bodywork of machines in dust in a way only found at a race track, covered in dirt. Indians, Harleys, Honda’s, Ducati’s, you name it, it was there. This is the epitome of Hooligan racing. Run what ya brung, boys and girls. Expect a hard, short and fast race with the only real trophy being to call your claim, a Hooligan.

RSD’s own Roland Sands, #10 was seen battling it out with GNC legend Joe Kopp in the initial track turns. Both mounted on Scout 60’s, rider pitted against rider. Pushing their 500lb machines to the max on the short make-shift track, they found traction where they could and made it where they couldn’t. All the while the crowd pressing on the chain-link fences begging for more.

Shaun Guardado, #66 (the other half of Suicide Machine Co.), took a gnarly spill putting his Harley Davidson Sportster 6” deep into the dirt. Fortunately, his intake didn’t take a hit and once he was on his feet, it was ready to draw again. Anxious as Eastwood in Fistful of Dollars, he waited patiently on the sidelines for the next race.

“I was running good and stepped a little too far out and was trying to make ground back up. I cut too hard on the inside and caught the peg of another racer. Right then the bike went over. But that’s it, that’s racing.” - Shaun Guardado 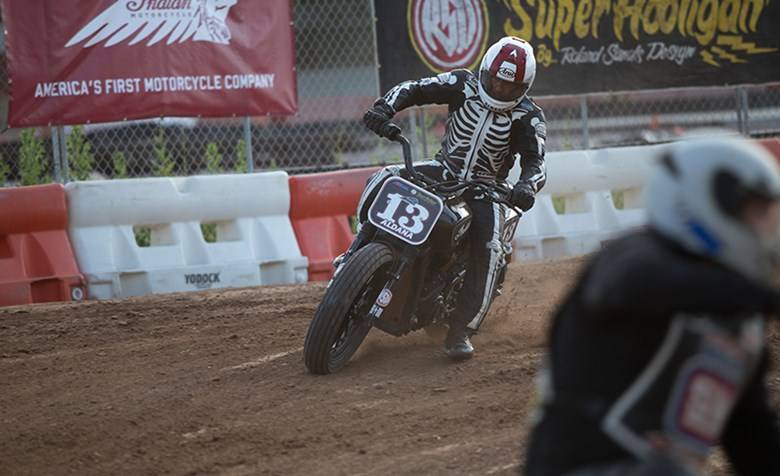 Avoiding the tangle, but finding a few of his own throughout the weekend, David Aldana, #13, the one, if there ever was, true Hooligan, showed up, ran his loaned Indian Scout 60 hard and proved - once a Hooligan, always a Hooligan.

In the midst of Indian Scout 60’s several other bikes showed up for race day. A BMW R nineT stood out amongst the V-Twins with it’s opposed cylinders, but most noteworthy had to be Jamie Robison’s Ducati Scrambler. Armed with not much more than knobby tires and what appeared to be a gas tank attacked by an angle grinder, (Jamie in a disco clown wig, of course) Jamie’s ability to tame his Italian machinery and the dirt saw him through the heats and into the night.

Pushing it hard making use of every bit of power, Gabe Vidrio, #77 and his Bennett Performance built Sporty was one of the crowd favorites. Built by Gabe himself, he’s running a 2006 1200 Sportster with Branch Heads, High-comp pistons bringing it up to 10.5:1 with Andrews N6 CAMs all fed by a 42mm Mikuni. The result? The production of 85HP to the rear wheel. Yeah. 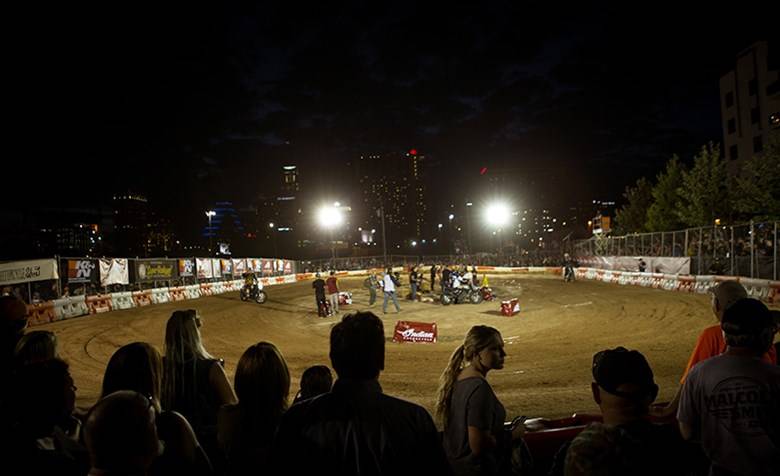 Churning away in the distance, you could hear the wood walls of the Motordrome vibrating in sync with Charlie’s Indian Scout wall-racer. Only to be drowned out by the crowd in the streets, as the sun went down and the lights of the Hooligan track came up, it was evident which machines would rule the night.

“The only thing I can compare it to, given I’m from Texas, is a dozen or so Cowboys making the miles to get a haul home. Anything could happen out there. It’s wild.” - Unknown fan 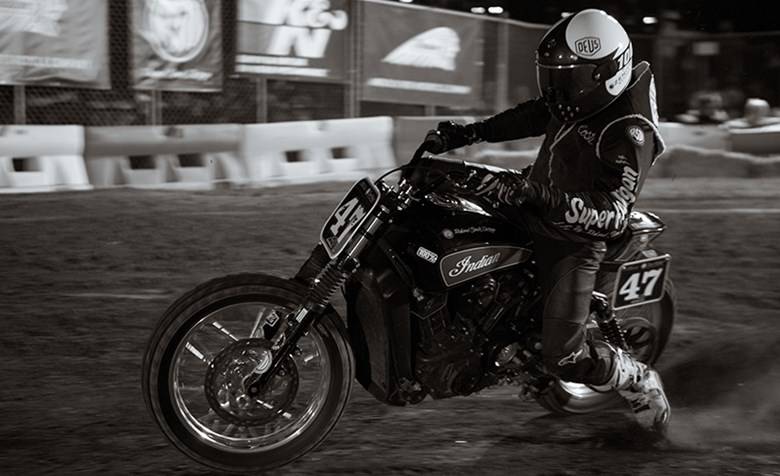 As if having legendary racer David Aldana wasn’t enough, the Hooligan crew advanced a few shutter clicks with Dimitri Coste, infamous Flat Track photographer and racer, hanging it all out there. He piloted his loaned Indian Scout Super 60 around the IV League built flat track like he’d been riding it for months. You’d never know it was his first time on a track built two days ago.

“Dimitri is one of the most stylish riders on the track and he's always fun to ride with and watch. He's a perfect addition to our hooligan circus and he rode the shit of that Scout. ” - Roland Sands 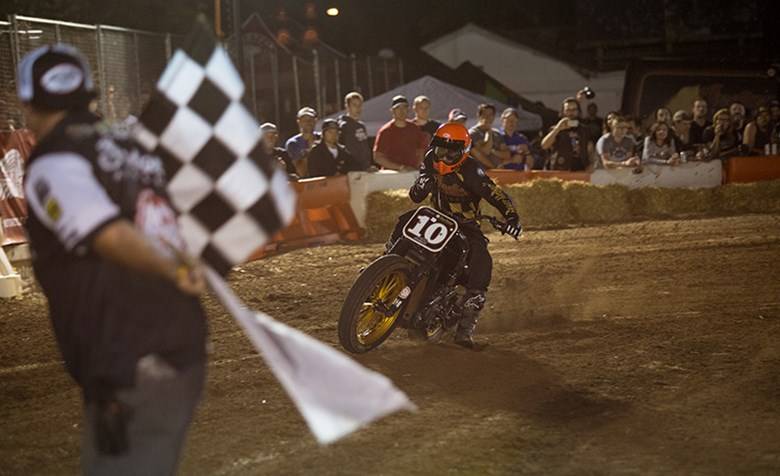 "I didn't know what to expect from this 480 lb beast, and was surprised how exciting and handy it was. Track was closer to MX than FT, but the main vibe made it all, we raced hard but always with a grin on our faces, nobody's takin it too seriously, we put on a show, turn throttles, laughed, under the lights and shared victory beers with the friends as we all won in a way."
Despite sporting a soon-to-be-released Bell Moto3 helmet, RSD leader Roland Sands wasn’t fast enough to tame the beast under the lights. (These races aren’t fixed folks!) Jamie Robinson took first place at the end of the “A” Main on his Ducati Scrambler. Behind him, exhaust bellowing, Roland Sands and in third spinning wheels sliding sideways, Cameron Brewer. 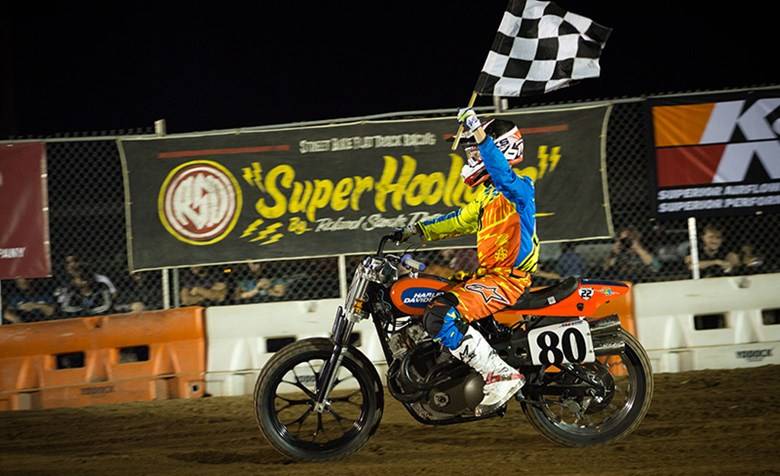 The Hooligans came out, raced hard and gave the fans an exciting evening! The only thing topping it was the fact that Steve Bonsey, #80 from Salinas, CA on his XR750, a hard working, race-living young man, who survives race to race on what he earns, took home the bacon. $2,500 from Indian and another $1,000 from K&N in the “Dash for Cash”! (Indian paid out $5k in total purse to the Pro-racers who showed up.)

“Bonsey rode like a wild man and earned that prize money throwing elbows, like you have to on a short track. Lots of these pros have to really hustle to survive from race to race. Truly dedicated to what they do. I see them driving back and forth cross-country just to hit a race in hopes to make a few bucks to fund the next trip back the other way. I’m so stoked Indian and K&N ponied up to help build a serious purse of money to give back to the pros. For a guy like Bonsey, cash like this makes the difference of being able to even get to the next race, or not.” Cameron Brewer

So there you have it folks, if we can get the city of Austin Texas to let us throw a Flat Track race in the middle of down-town, chances are we can do it just about anywhere.

Want to see Hooligan Flat Track it in your town? Email us (info@rolandsands.com) and tell us where, when and why. We’ll do our damnedest to make it happen! 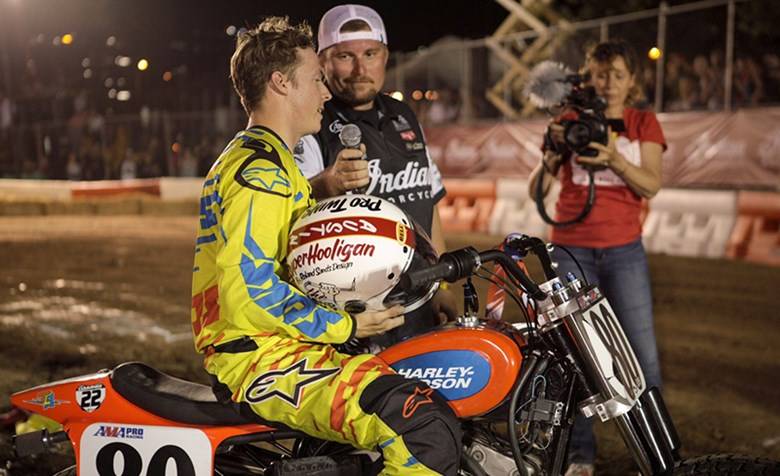 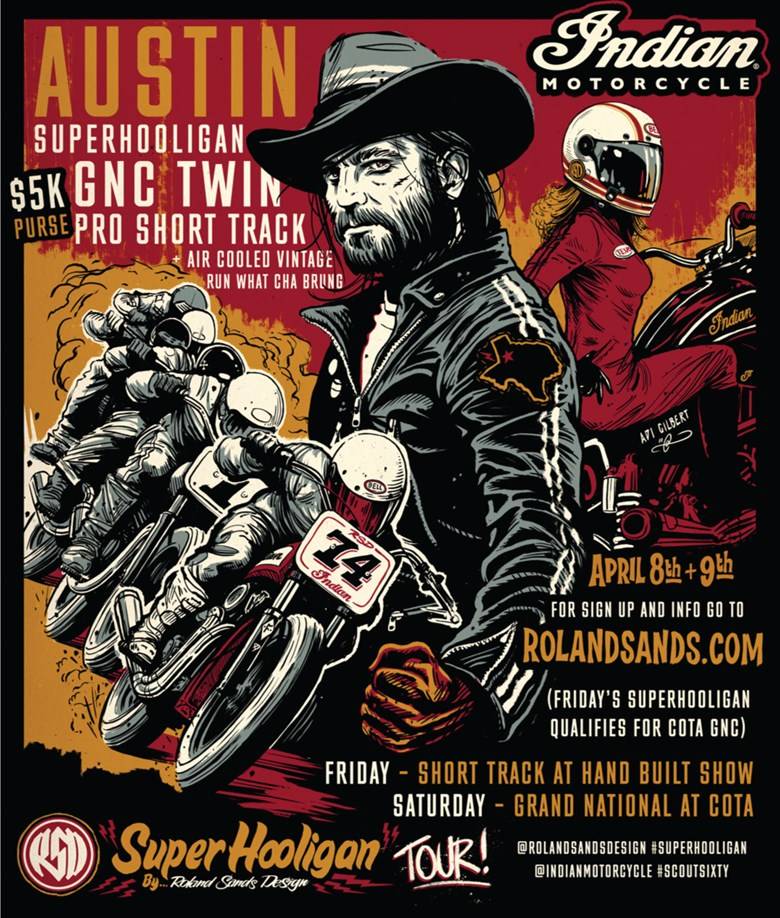