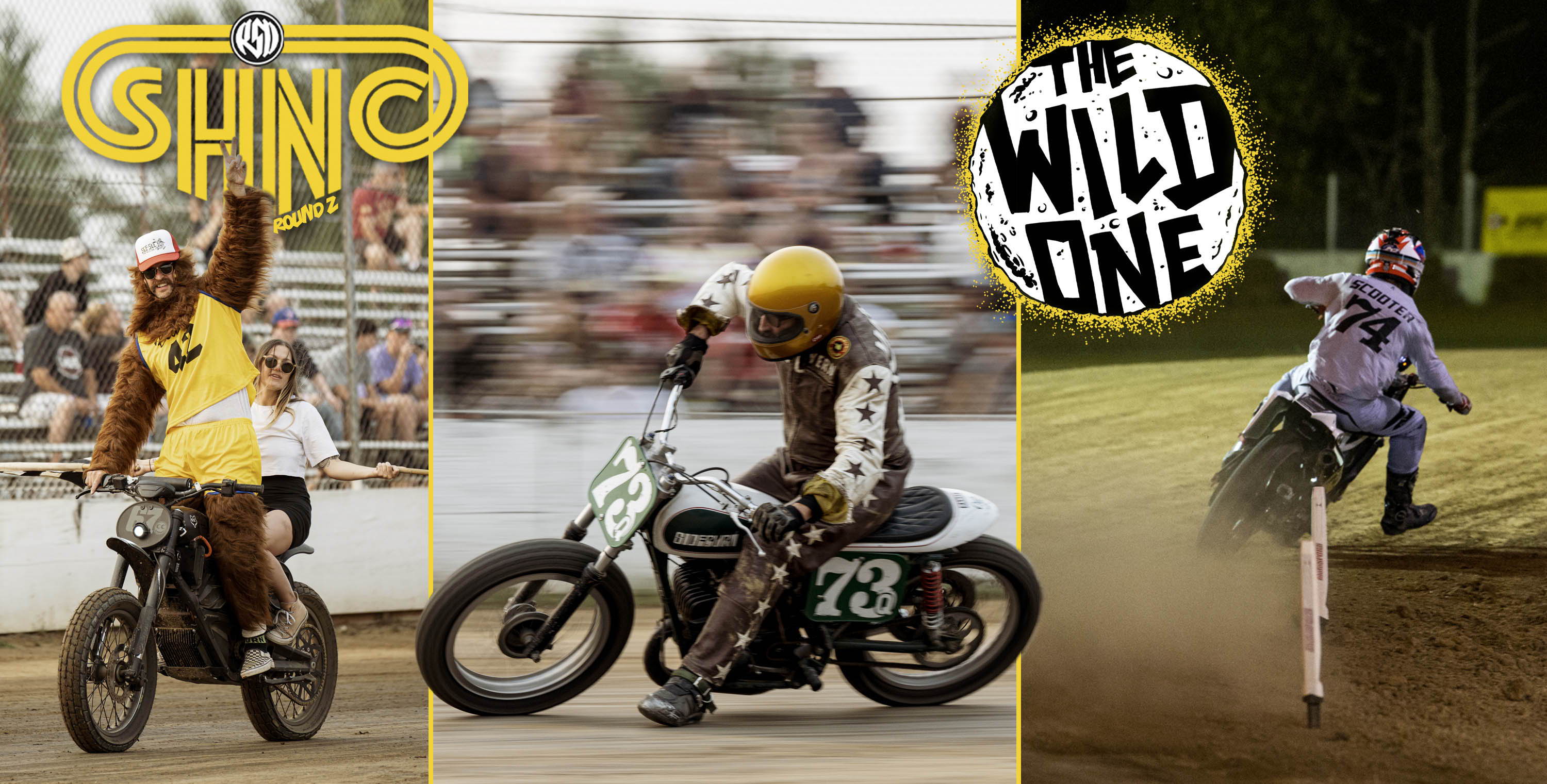 After an unforeseen year hiatus, Super Hooligan racing and general motorsport shenanigans were back in the small town of Castle Rock for the return of The Wild One! and Rd 2 of the Super Hooligan National Championship QuaTTro!

When you combine the preeminent fun haver virtuosos Roland Sands (Roland Sands Designs) and Thor Drake (See See Motorcycles), it’s pretty much a guaranteed good time. The experiences they create with events like the 1 Show and now what’s been dubbed the “Holy Grail of Flat Track Fun” The Wild One, Roland, and Thor have really pushed the boundaries of motorsport creativity. Attend one of their events, and you’ll for sure see some shit on a Motorcycle you’ve never seen before. This years The Wild One didn’t disappoint, a beautiful amalgamation of a country campout, combustion creativity, and all-out fast as F@#K racing. Rules are few in Super Hooligan racing, to begin with, but at The Wild One, anything goes… and some go on anything!

The Castle Rock ⅜-mile dirt track was founded in 1965 and was a staple track on the AMA GNC circuit from 65-79. Just weeks before the Castle Rock TT was set to take place in 1980, the volcano Mt. Saint Helens erupted and buried the track under 10 feet of ash. The Mt. Saint Helen’s Motorcycle Club later rebuilt the racetrack, and it once again hosted nationals starting in the early 1990s. The Wild One, named Dirt Quake initially, originated in 2014 and was a slight deviation from the professional Flat Track racing of the AMA predecessor; instead, this event offered all classes. From the utterly inexperienced to the expert pro-level riders. “Rung what you brung” is the name of the game. All bikes from choppers to ATC 3 wheelers, minibikes, and sometimes even jet skis! Costumes and individuality are encouraged, and good times are just as important as lap times. 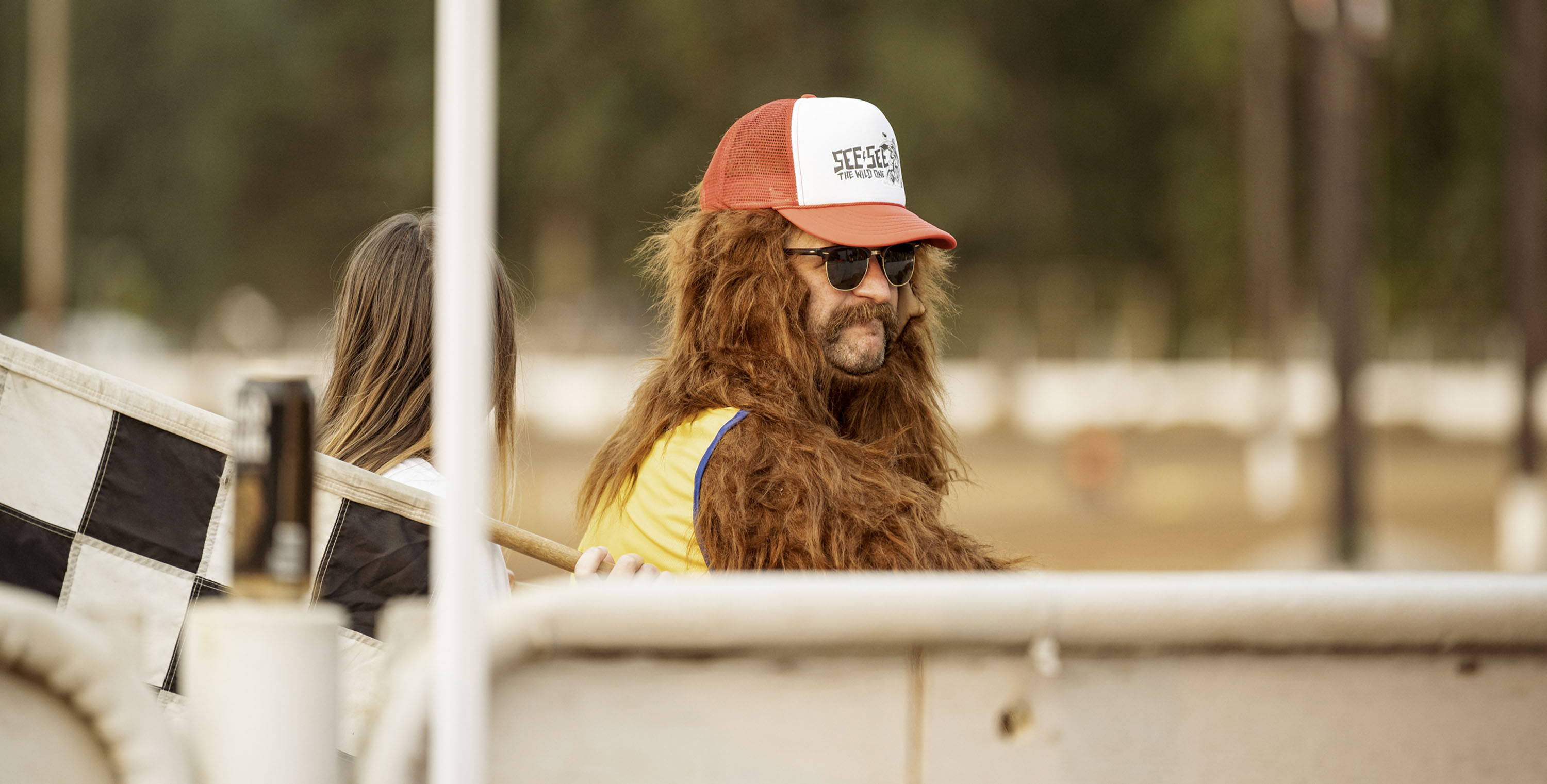 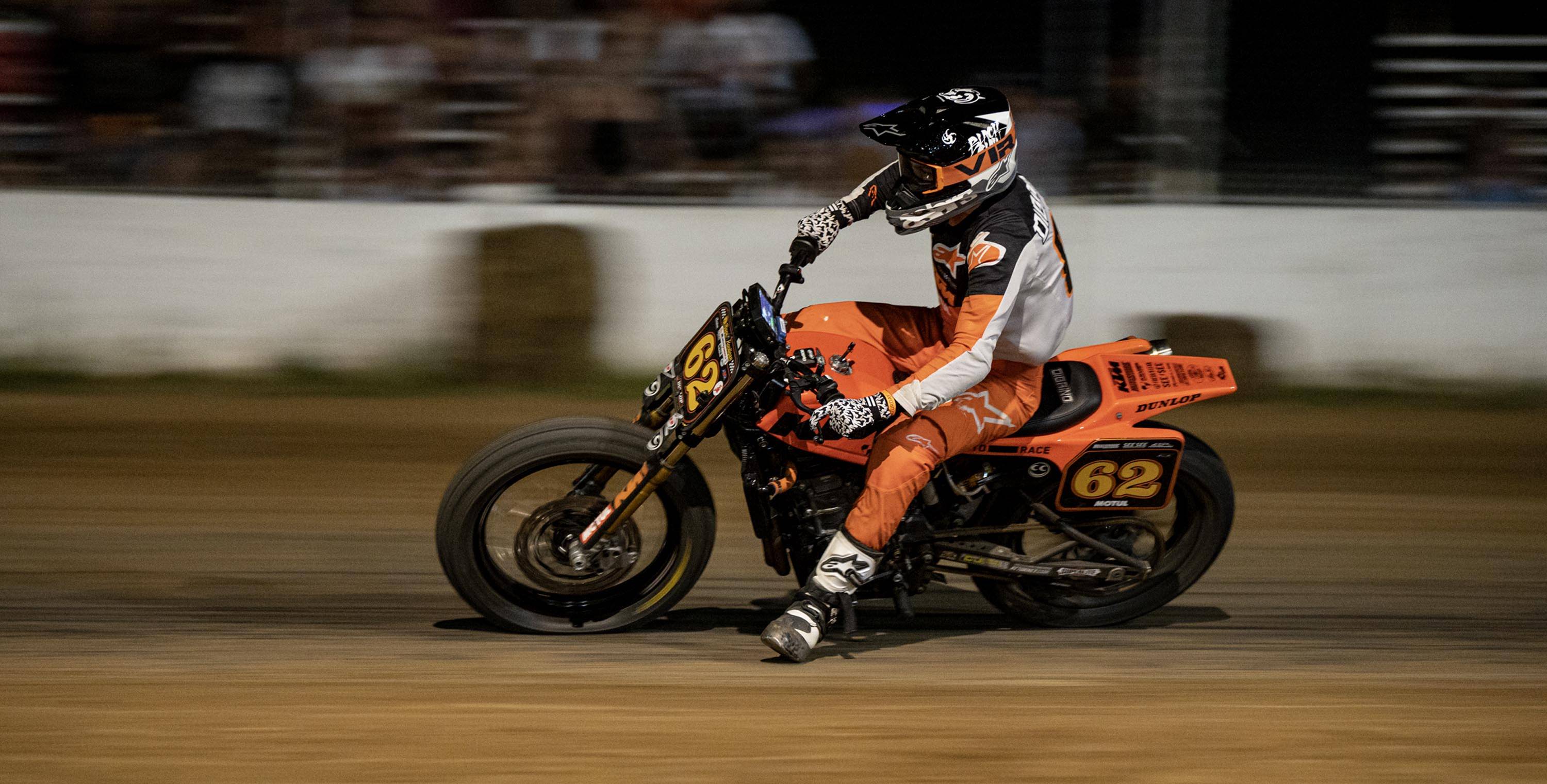 Defending SHNC champion Andy DiBrino showed up to Castle Rock high on confidence coming off his second-place finish at RD 1 in Laguna Seca; however, DiBrino would be starting RD 2 with a 10-point deficit due to the fact he wouldn’t be riding the same bike. This put riders like AJ Kirkpatrick, Stace Richmond, and the International Playboy Frankie Garcia in the bird seat to possibly leave WA with the points lead. It seems for every weirdo Portland produces; Washington State produces a fast flat tracker. Luckily for the SHNC filed, there was an AFT race the same weekend. Even though the top-tier WA flat trackers were on the other side of the country chasing an AMA championship, there were still plenty of local hot shoes in attendance who were hell-bent on showing a bunch of Hooligans the fast way around their local track. Including local singles ripper, Dominic Cameron who scored a wild card ride on one of the RSD prepped Indian FTR’s Dominic came from the recommendation of 2017 AFT rookie of the Year Tanner Dean and would be Dominic’s first Super Hooligan ride.

The heats and semis quickly pointed out who the fast folks were going to be Scotty Baker (Brad Bakers' younger brother), Scooter Vernon, Andy DiBrino, and Frankie Garcia; all had the speed to run out front. But just like any good Stable Lad with tell you, it’s only the mane* that matters.

In typical Thor, aka "Portland Jesus" fashion, The Wild One wouldn’t see the SHNC main until the fans were treated to a Luchador Wrestling match right in the middle of the infield ...... Of course, the Mexican in the mask won.

At the start of the SHNC main, it was Andy DiBrino with the holeshot leading the pack into turn won. The elation of a good start would be short-lived as Frank Garcia went down into turn one causing a red flag and a restart. Fun fact Frank Garcia was the only rider in attendance to ride the original Castle Rock tack before the volcano eruption. Frank also raised a true sportsman because his son Frankie Garcia was first on the scene to help him up and get back on the bike.

After the regroup and restart, it was the Savage Customs backed Scooter Vernon with the holeshot followed closely by DiBrino with Scotty Baker giving chase in a close third. Frankie did his best on his Makita Tools backed FTR to keep the top three honest, but ultimately they would finish just the way they started, with Scooter Vernon taking home the checkers, DiBrino in second, and Scotty Baker rounding out third.

With the racing done, everyone headed out to the shed to watch the live band, celebrate their victories, trade war stories, and nurse their wounds with a couple cold ones. The Wild One definitely lived up to its namesake. As we look forward to RD 3 October 3rd at Charlotte Motor Speedway in Charlotte, NC, we have a whole new pile of quandaries to ponder. Is NASCAR ready for Super Hooligans? Who’s fans will be the rowdiest? Does smoke off a Dunlop DT4 taste different than it does off a Goodyear Eagle? Oh, and WHERE THE F@#K is Jordan Graham?? Has he lost the sauce and trying to find himself in the desert? Hopefully, Tom Hardy will let him borrow that Venom bike, and we will see if he still has what it takes to be a Super Hooligan. 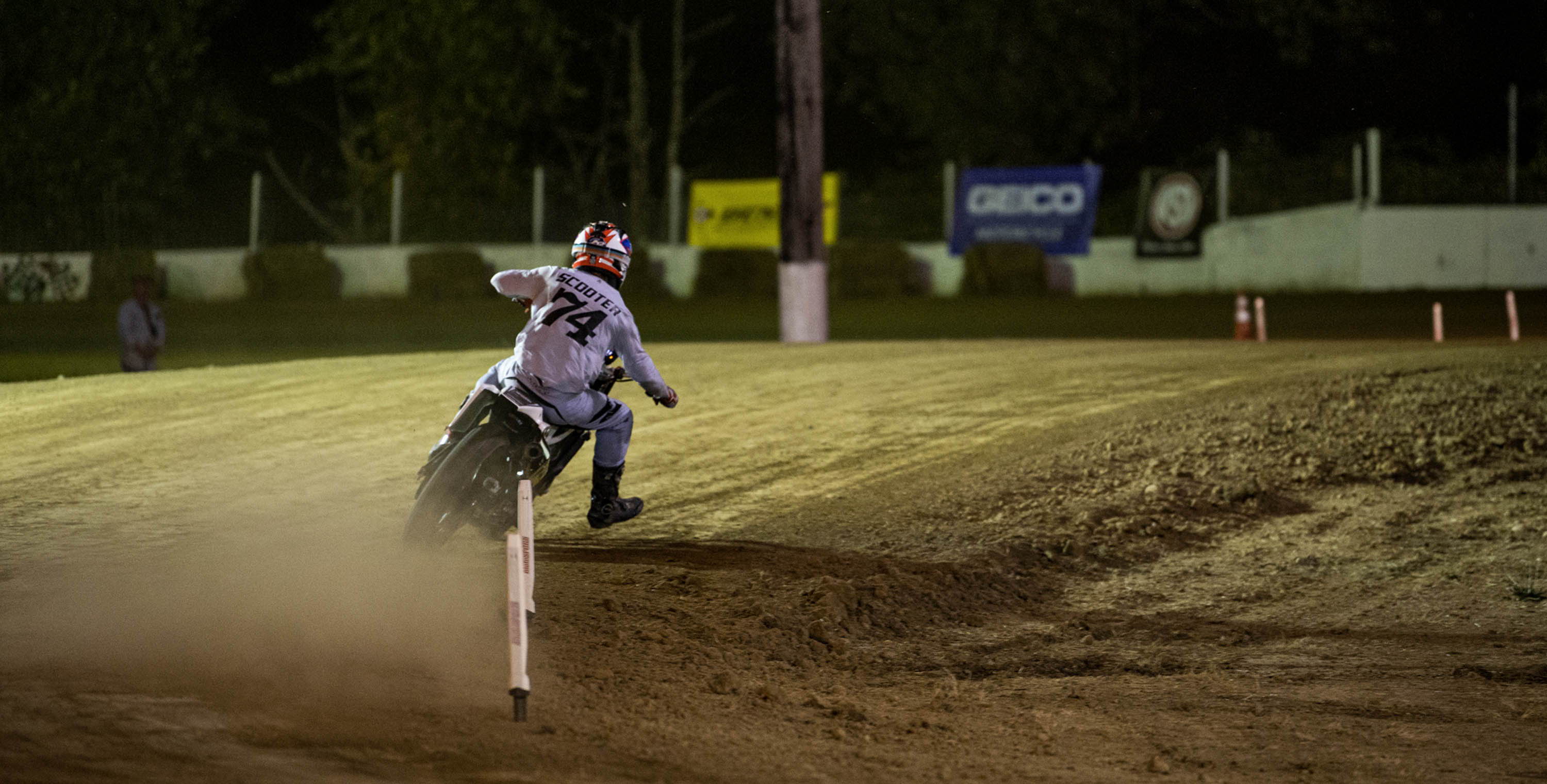 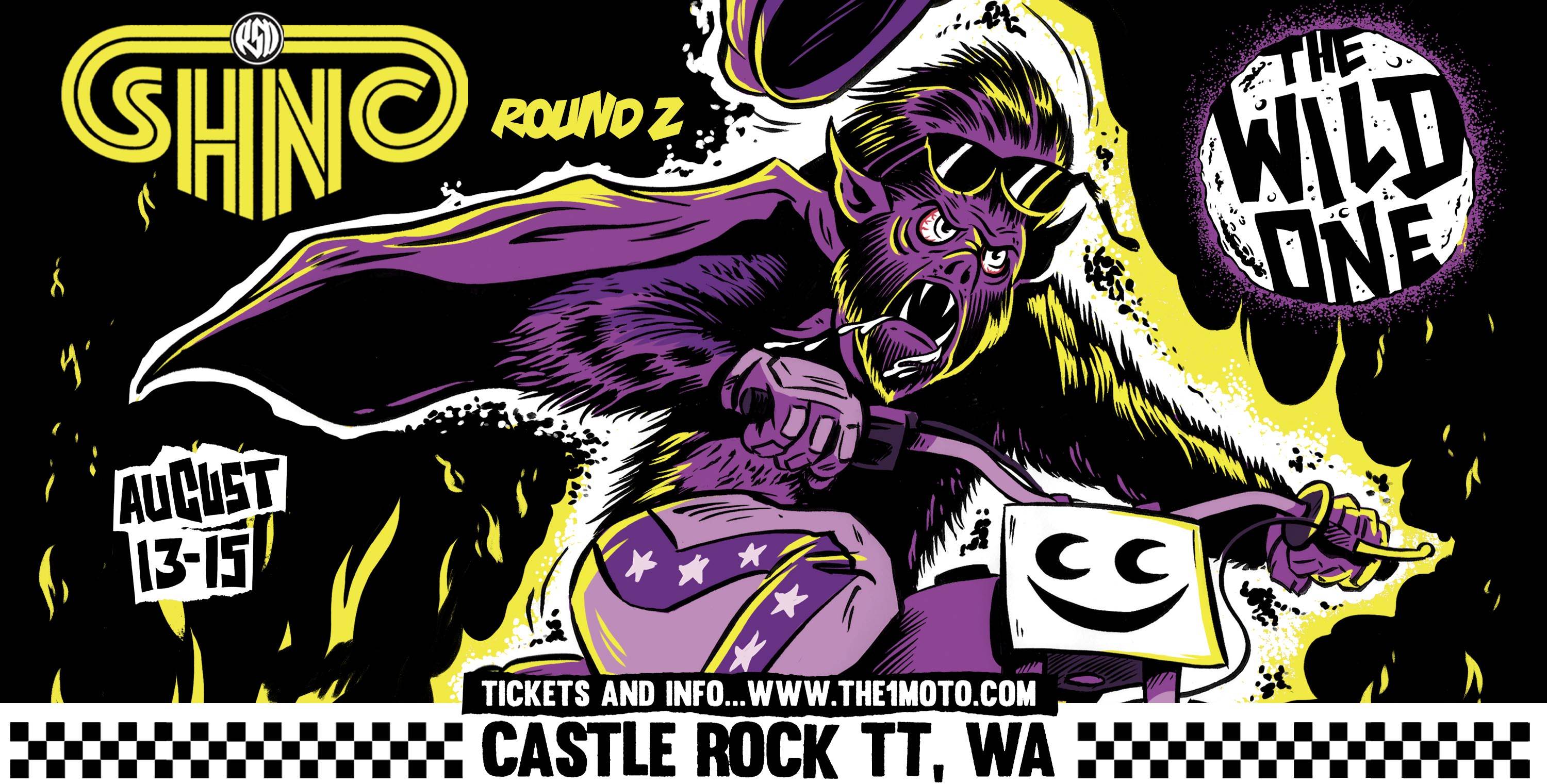 It's Round 2 of the four race Super Hooligan National Championship series dubbed the "QuaTTro". After an epic kick off with our friends at Moto America at the legendary Laguna Seca, we’re heading to our second round with See See motorcycles “The Wild One” at the national caliber TT at Castle Rock. The brakes and slicks come off and the dirt track tires are back on for bar to bar TT action on the dirt.

This event is about having a good time as much as it’s about racing. The gang at See See has this to say.

“This extra special event offers all classes for the completely inexperienced to the expert pro level riders. “Rung what you brung” is the name of the game. All bikes from choppers to ATC 3 wheelers are welcome. Costumes encouraged but most importantly - let’s have some FUN.” Head to the theoneshow.com website for full info on the event. Not sure what class you might fit in? Send the guys at see see a pic of your bike and some info on your riding experience and they will help you get out on the track. Limited class sizes so don't wait!For more info email bikes@seeseemotorcycles.com

Super Hooligan riders sign up on the website for the Super Hooligan class and get your bike ready for the dirt.19” wheels, no front brakes, 400 lbs, stock frame high bar twins are allowed. For full rules head to superhooligan.com

See you at Castle Rock!!

Not sure what you're getting into? Here's a few snaps of the mayhem that is The Wild One! 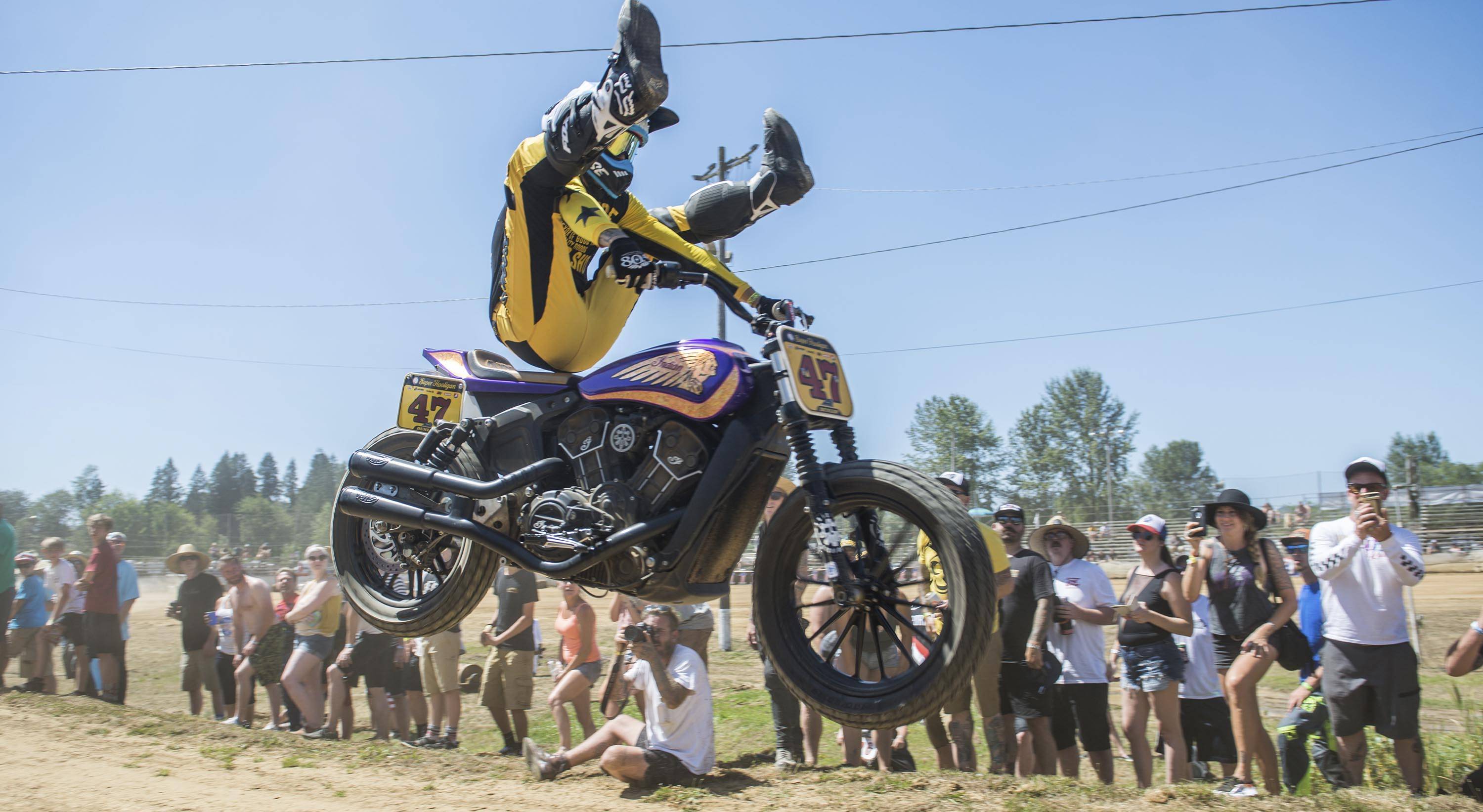