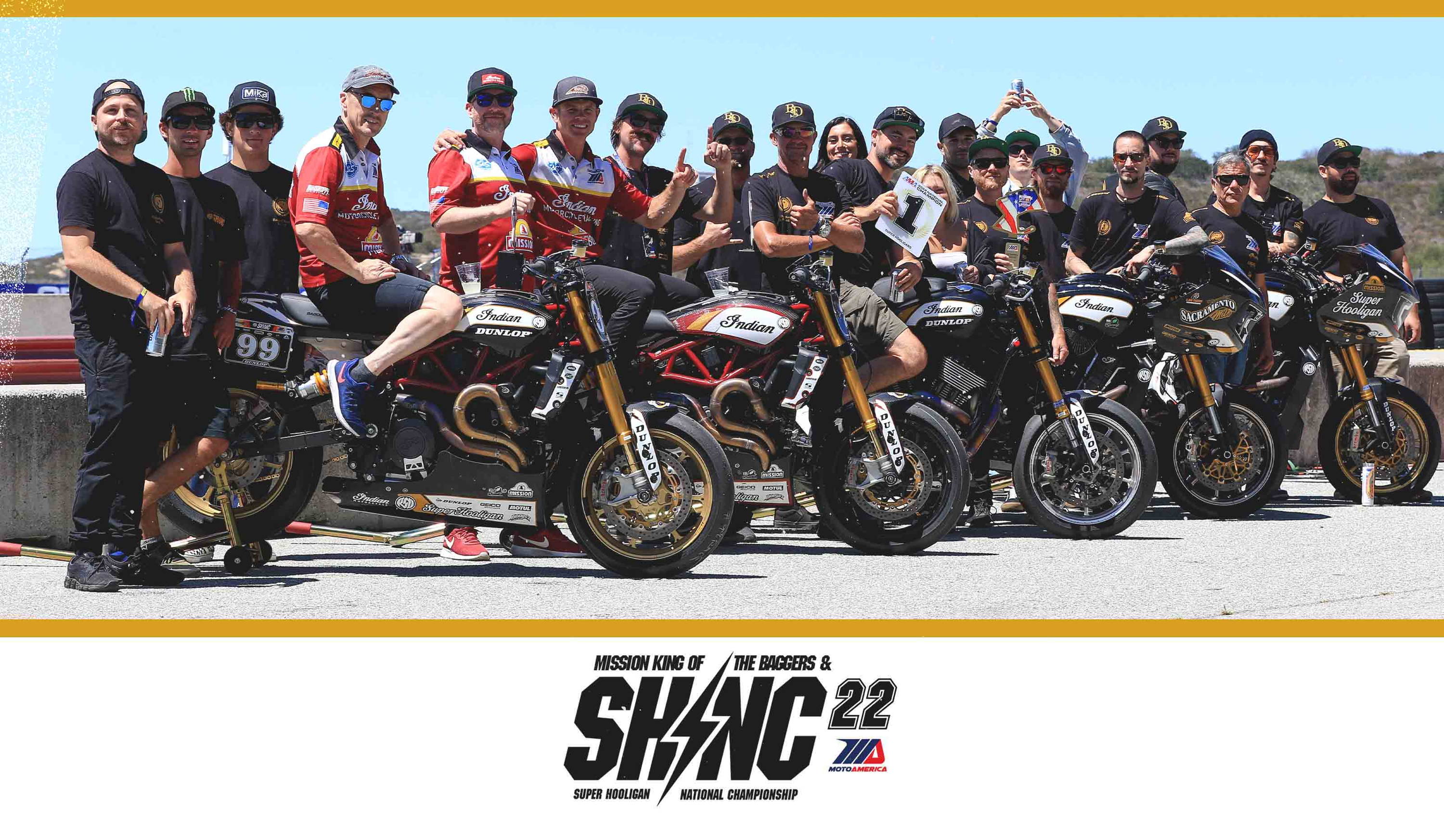 Roland Sands Design is known as the penultimate innovator and boundary pusher in the 2-wheeled, riding, racing, and culture space; it's apparent in all they do, from their casual and technical apparel to their hard parts and custom builds. The team can take a thing that exists and improve upon it to where it becomes something beyond contemporary, all while still maintaining the essence which made the thing inherently cool in the first place. The Super Hooligan National Championship is no different. Roland had already created a series for riders who knew how to turn left with little or no race experience at all into full-fledged AMA Hooligan Flat Track Champions. Now the goal was to create a platform for riders brave and confident enough in their Motorcycle racing chops to test their skills on some of the most prestigious road racing circuits in North America. The 2022 Super Hooligan National Championship did just that! Racing motorcycles purchasable in dealerships and with minimal mods, any Hooligan could make their Road Racing dreams come true …. Or at least realized.

This seasons 4 Round series kicked off in Daytona Beach, FL, and finished crowning this year’s champion at the world-famous Weathertech Raceway Laguna Seca.

Multi-time SHNC champion and last year's runner-up Andy DiBrino came to the final round at Laguna Seca leading in points on his factory KTM 890 Duke, but a mere 4 points separated the top 3 with the Saddleman Lloydz Garage built Indian FTR 1200 piloted by Cory West sitting in second and Tyler O’Hara on the RSD Indian FTR 1200 3rd in points setting the stage for a winner take all battle.

O’hara secured pole position thanks to some crafty riding and a little help from RSD teammate Jeremy McWilliams. McWilliams gave Tyler a nice draft around the course during qualifying, giving Tyler the few tenths of a second advantage needed to secure pole in the final. DiBrino sat P2 and McWilliams lined up in the 3rd position. The Indians weren’t the only ones playing team sports, as last year's Laguna Seca winner and KTM North America Flat Track team manager Chris Fillmore was back to see if he could duplicate last year's phenomenal ride or at least help to secure an orange bike on the top of the box by assisting teammate DiBrino.

"We are racing what’s being sold in dealerships and elevating those machines. Indian, KTM, BMW, Harley Davison, Ducati, and now Energica and Zero electric are all competing together.   What’s not to love about that." – Roland Sands

“I’ve been fortunate enough to race motorcycles all over the world, but I’ve never had as much fun as I had this year with the SHNC series – Rennie Scaysbrook

"Every race was an epic battle and I can’t wait to race more naked bikes next year!" - Cory West

As the revs went up and lights turned green, it was Stephano Mesa on the electric-powered Energia machine with an amazing bottom of the 2nd-row launch that led the pack over the hill through turn one; however, the lead was short-lived as KTM’s Chris Fillmore utilizing his Supermoto background stuffed it into turn two, leg out backing it in with style.

By lap 3 of the 8-lap main event, it was apparent Tyler O’Hara was on a mission. Making up for a lousy start, Tyler went from 3rd to first in one lap out, motoring both KTM’s and making a dramatic outside inside pass down the corkscrew muscling and finessing his RSD Indian FTR1200 past RSD Indian teammate Jeremy McWilliams.

"I’m stoked on my 8th place in the championship and this Hooliqueen absolutely cannot wait to race with these guys again next year!! Let’s go, boys!! 😜🤘" - Shelina Moreda

As O’Hara and McWilliams pulled away, finishing 1st and 2nd respectively, the real race was for 3rd with a 3-way bar-to-bar battle between Cory West, Andy DiBrino, and Chris Fillmore dog fighting and swapping positions all race long. Ultimately West was able to keep the KTM’s behind him, with DiBrino finishing 4th and Fillmore grabbing the checkers in 5th.

RSD’s Rennie Scaysbrook, fresh from his Isle of Mann TT effort and current leader in the Mission Foods Air Cooled challenge championship, was once again the fastest qualifying air-cooled effort on the grid and even quite a bit quicker than some of his water-cooled competitors. Rennie qualified 12th overall and kept an intense pace besting all the other Air-Cooled machines for his first AMA championship and finishing a respectable 15th overall. Second fastest in the Air-Cooled class was Tony Solima on the Quaid Racing Harley Davidson, followed by Warriorbuilt Quaid Racings Lucas Geebo.

As the bikes rolled into the winner circle, it was Indian one, two, three, and four with Rennie’s Air-Cooled finish and Championship clinch. At the finish, Roland immediately bolted from the announcer's booth to the podium to congratulate his riders and celebrate his first team championship since the inception of his brainchild, the Super Hooligan National Championship.

“Racing the Super Hooligan class was an absolute pleasure; working with the RSD team and helping to develop the Indian FTR1200 into a race-winning machine was a lot of fun." - Tyler O'Hara

“Racing in the Roland Sands SHNC has been some of the most fun I've had racing in a while. The riders range in skill levels and experience, but the comradery and handshakes are all from the same feel-good place." - Patricia Fernandez