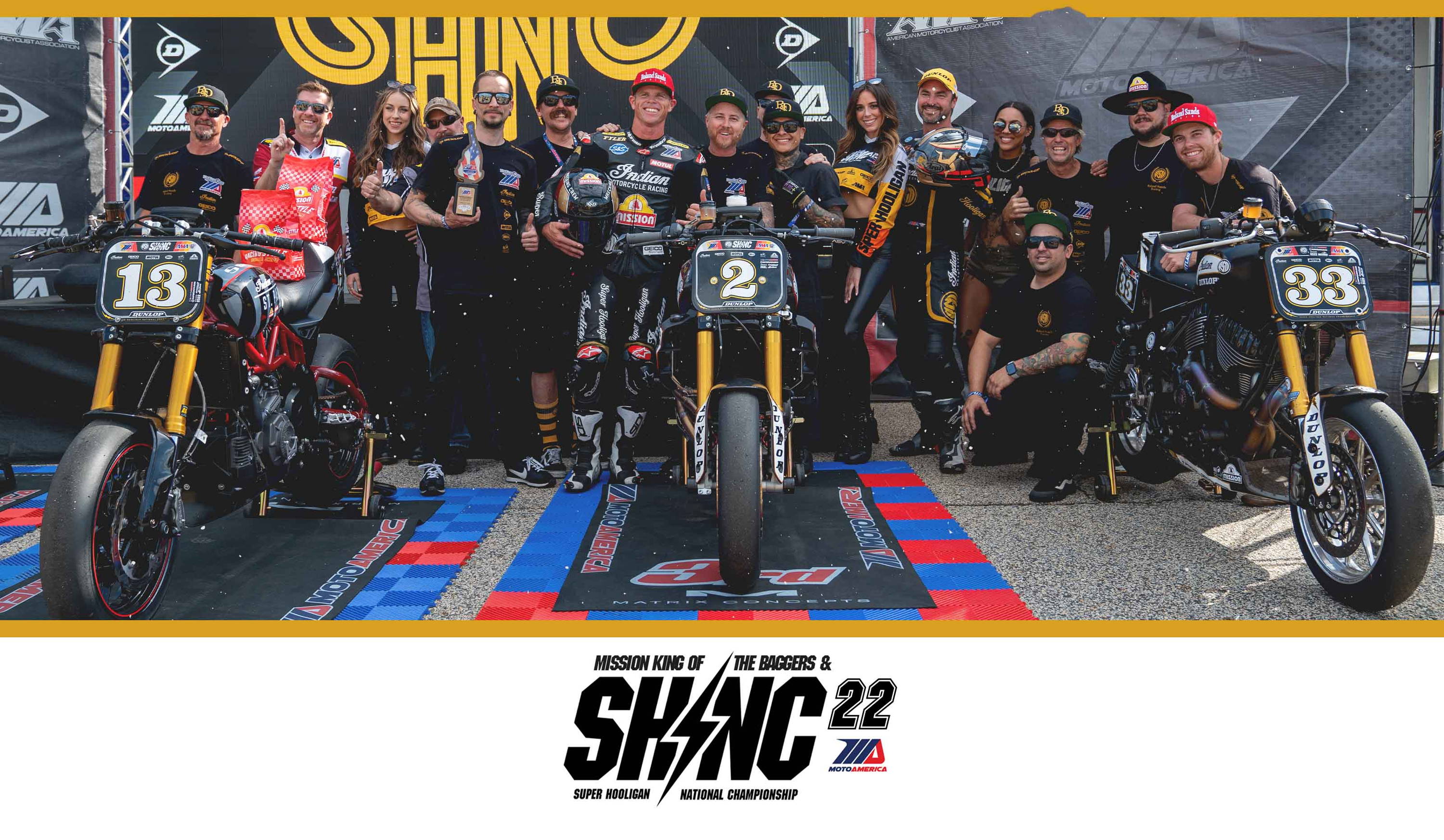 It was an epic and drama filled weekend of Moto America racing at Road Atlanta. The Roland Sands Design/Indian race team took multiple podium finishes in the Mission Foods King of Baggers and Roland Sands Design Super Hooligan races. Roland Sands personally won his last National Road Race in 2002 on Yamaha 250 GP bike at Fontana. It was a long time coming for the X racer, now team owner to see his guys stand on top of a National Road Race Championship podium.

mission king of the baggers round 3

The Roland Sands Design/Sacramento Mile/SDI Indian Challenger piloted by Bobby Fong led off the weekend for the RSD crew with a P2 in qualiftying behind factory HD rider Kyle Wyman and in front of both factory Indian’s and the second factory Harley. The Mission Foods King of the Baggers challenge, a 3 lap sprint, was run directly after KOB qualifying and set the pole for the main on Sunday. With 5K on the line the riders are ready to push hard for the winner take all purse and Kyle Wyman pushed a bit to far after passing Fong for the lead on lap 1 crashing out. Bobby Fong took advantage of the mishap to lead across the stripe after 3 laps taking the win, the Mission Foods check and a first win for the Roland Sands Design/Sacramento Mile/SDI Challenger.

In the eight-lap Mission King of The Baggers race, defending class champion Kyle Wyman (HD) returned to form after a tough day on Saturday. Ironically, Challenge winner Bobby Fong (Indian Challenger), who earned the pole for today’s race based on his victory on the Challenge, mimicked Wyman and crashed his Roland Sands Design Indian. That opened the door for Wyman, who went on to get the win. Second place went to Vance & Hines Racing Harley-Davidson’s James Rispoli, the two-time AMA SuperSport Champion returning to MotoAmerica after an eight-year hiatus. Mission Foods/S&S Cycle/Indian Challenger Team’s Tyler O’Hara (Indian Challenger) rounded out the podium in third.

Frankie Garcia Finished 8th on the second Roland Sands Design Indian Challenger proving his consistency and the Challengers reliability. Frankie is the only rider to have finished every King of the Baggers race since the series inception in 2020.

After a rain soaked Daytona and a cancelled second race the Super Hooligan riders were blessed with perfect weather and a make up race at Road Atlanta which saw the SHNC race Saturday and Sunday at the Road Atlanta Moto America round. The SHNC series which featured 750cc and up Air Cooled and Water Cooled street bikes with high bars, flat number plates and stock chassis

Saturday’s Super Hooligan race 1 was taken by Corey West on the Saddlemen/Lloyd’z Garage’s Indian FTR 1200. The JLC Concrete/KTM/DiBrino Racing’s Andy DiBrino was a close second after a race long battle for the win gave Corey the advantage, tying the duo for the championship.

Third place went to Roland Sands Design’s Tyler O’Hara and his Indian FTR1200. Both Tyler and his Ulsterman teammate Jeremey Mcwilliams were forced to start from the back of the grid after missing the one-minute window for the sighting lap. Both riders charged through the field, but the pace of the front runners proved impossible to overcome.

Sunday’s Super Hooligan Race 2 would round out a long weekend for the Roland Sands Design Crew. The RSD duo of Jeremey McWilliams and Tyler O’Hara put a tremendous amount of work into their Indian FTR 1200’s with the RSD team dialing in the suspension and geometry to get the most out of the bikes after race 1. The start of race 2 immediately showed the improved speed of the RSD Indians as both Tyler and Jeremy shot in front of Debrino and Corey West dropping a full second off their qualifying times. It was an epic bar to bar battle as the four riders changed positions multiple times a lap. Tyler and Jeremey, while teammates, took no quarter exchanging elbows and paint while O’hara would ultimately take the win with McWilliams a close second. The KTM of Andy Debrino would sneak in a last corner, last lap pass to take the final podium spot away from Saturday’s race winner Corey West.

This famous track has always delivered some of the best motorcycle racing of the season. Immerse yourself with Friday qualifying and two full weekend days of racing in while being near the motorcycles and racers themselves with our open race paddock. Bring the family and enjoy food, stunt shows, and racing! Take advantage of multiple ticket options. Choose the Sunday Fan Lap option and ride your own motorcycle on the track itself! Join fellow fans and over 120 riders competing in seven classes and experience some of the best competition found in any sport! 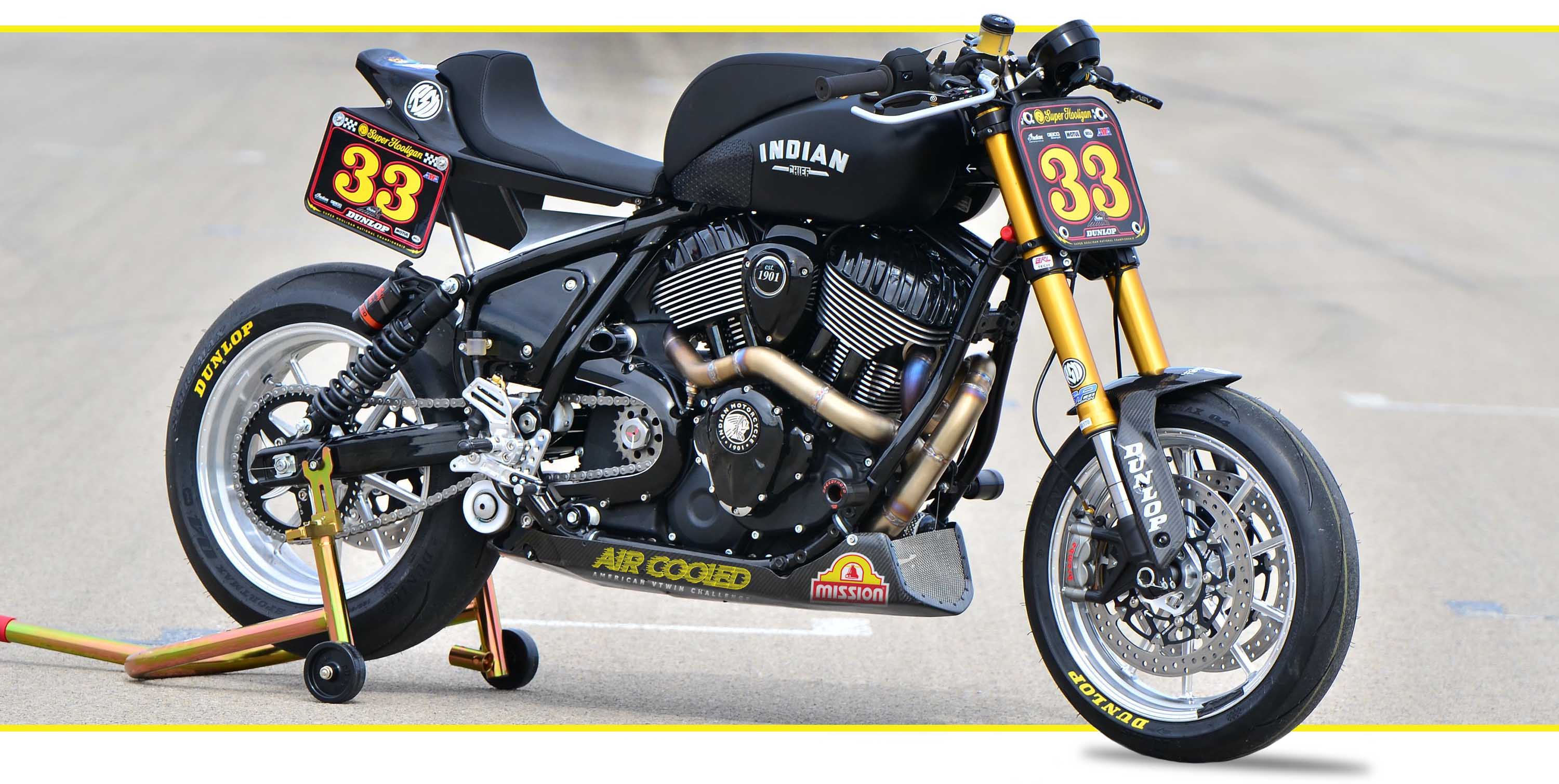 The Super Hooligan National Championship has joined forces with North America’s #1 tortilla brand, Mission foods, to introduce the Mission Foods Air-cooled American V-twin Challenge as part of this year’s Moto America Super Hooligan motorcycle road racing national championship series. The Mission Foods Air-cooled American V-Twin Challenge is a race within a race, to be featured at all 4 rounds of the SHNC and kicking off with a double header at the legendary Daytona Motor Speedway March 10-12. ​​

The Mission Foods American V-twin Challenge will award the fastest Air-Cooled American V-Twin racers in the Superhooligan class with $2500 in payouts per race, as well as an additional $2500 bonus prize going to the rider with the most points after four rounds of SHNC road racing. The payout will award the top three finishers on Air-cooled American V-Twins. $1250 for first place, $750 for second and $500 for the third best finisher of each SHNC round.

The Super Hooligan class features riders and bikes from many disciplines and broad set of rules meant to bring new riders and brands into road racing. With the addition of the Mission Air-cooled American V-Twin Challenge, we hope to inspire American V-twin riders who normally race at a local level, to come out and race with the SHNC at a national level and elevate the visibility of Air-cooled American V-twin road racing.